Lincoln is a lovebug, very friendly and inquisitive.  He walks really nicely on a leash, but I'm not sure whether it's because he's just been in unfamiliar environments with me and wants to stick close.  He squeaks when he's anxious and has barked a few times in the yard with X and Y.  All three barked at the muscial ice cream truck when it circled the court, and no, I did not buy them any LOL!

That's the one thing that I noticed is that he sleeps alot.  It could be just because of his poor condition and he lacks energy, but I remember you also said that it was a way for them to deal with stress.  I brought Lincoln back in first, put him in the crate with his water bowl and food before letting the boys in to be fed.  When all were done, I put up the food bowls and let Lincoln out.  He explored a bit with X following him then he went to sleep and the other two followed suit.

Forgot the most important part. Except for his terrible, terrible ears, Lincoln's head is huge and oh so gorgeous and sweet now that he's clean.  He'sshaken his head a couple of timesand started the raw patches bleeding.

His body condition is poor and his fur is very thin -you can see through to his skin in some places.  Body is very thin with no muscle tonei the hind end.

Large bald patches on his elbowsprobably from lyingon hard surfaces.

And no surprise, he;s a drooler.

Can't wait for you to meet him – you'll fall in love in an instant.  I sure did, and so did a lot of other people today.

A couple even wanted to adopt him.  I told them it would be a while before he would be available and gave them the BHRR site info to read up on the adoption procedures and invited them to fill in an application if they felt they met the qualifications.

Picture below is from his arrival to BHRR on Saturday July 23rd. Sean took a photo and sent it to me as I was at the TAKE THE PLUNGE Event that day. Everyone at our booth had to have a looksy at the boy that stole the hearts of many as we tried so hard to save him! 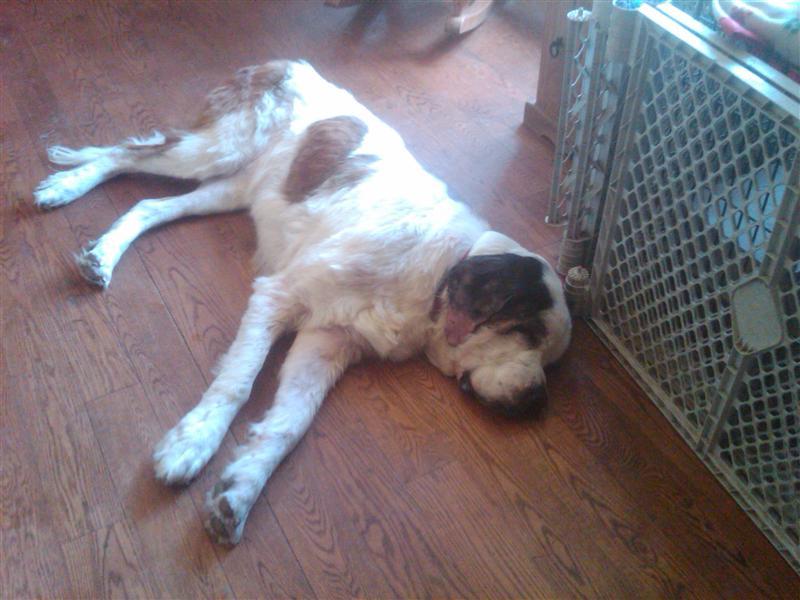