Has idiopathic seizures and had 7 seizures on October 20th and was admitted to the Hospital for seizure watch.

Bloodwork was also done to see how his liver was handling the Phenobarbital. Results came in the next day to say that his liver was tolerating the medication well.

We had obtained more phenobarbital for him, gabapentin – as he appeared sore/stiff in the hind end plus diazepam to administer rectally if necessary.

We placed him on Forti Flora also to assist with his gut.

On November 3rd – he had blood-work done to see how his phenobarbital levels were on the increased dosing.

He had been 14 days seizure free.

He had an exam, ears checked – no ear infection yet, Burows was dispensed and an x-ray done. We wanted his hind end further investigated due to his lack of rear angulation and the almost ‘popping’ of his hips and how he ‘swayed’ when he moved.

His Vet recommended against giving him Nexgard Spectra as flea/tick/heartworm meds per VIN can lower the seizure threshold. His Vet did some research and the safest of these meds to give to a seizure dog based upon the latest research/studies would be Revolution/Sympatica  yet, the general rule per the Vet who saw him is that all flea/tick meds should be used with caution in seizure dogs. So, we have elected to not give him any meds at this time. He had been on Nexgard Spectra prior to us getting him into rescue too and we obtained one dose when he arrived into Rescue.

The x-ray was reviewed by the Vet and based upon his findings – HD; recommended to have a surgical consult.

Additionally, based upon those findings Deramaxx was added to his med regime.

Two more months of Phenobarbital and Gabapentin were dispensed and two more doses of Diazepam was also given.

Sent off the x-ray to Dr. Philibert, ortho specialist to advise.

Results of his pheno levels are within the reference range.

Dr. Philibert also got back to us and the diagnosis is marked bilateral hip subluxation secondary to hip dysplasia.

“Dogs that have marked sub luxation from hip dysplasia can show signs of pain as exhibited in this patient, especially when they are between 6 and 18 months of age because the hip sub luxates during weight bearing. At some point during that time, the acetabulum will fill up with scar tissue and eventually bone while the joint capsule thickens and the joint remains in a sub luxated position. The hips are often more comfortable at that point and some dogs may live a good life after that with medical management of osteoarthritis.

Total hip replacement will give best function. However there is around 10-20 percent of patients that have severe complications. which can make THR a costly option

Femoral head excision may be an option, but giant dogs like this can have a poor outcome so I would only consider it if pain cannot be managed other ways and hip replacement is not a financial option.’

Additionally, per Dr. Philibert and we were aware, no one in Ottawa does THR and we would have to consult with Montreal. We will be sending the x-ray over.

We could only get one view as due to BHRR’s Oslo’s seizures, sedation was not safe to give.

Effective immediately, our doors are now closed for any future/further intake from those that we have already committed to- we have BHRR’s Dean arriving tomorrow, BHRR’s Nala ETA on Saturday and the 3 Musketeers on the 21st.

With the recent finding for BHRR’s Oslo; our doors need to be closed so that we can figure out fundraising for him and not just for BHRR’s Coupe and BHRR’s Symba own substantial mounting bills. 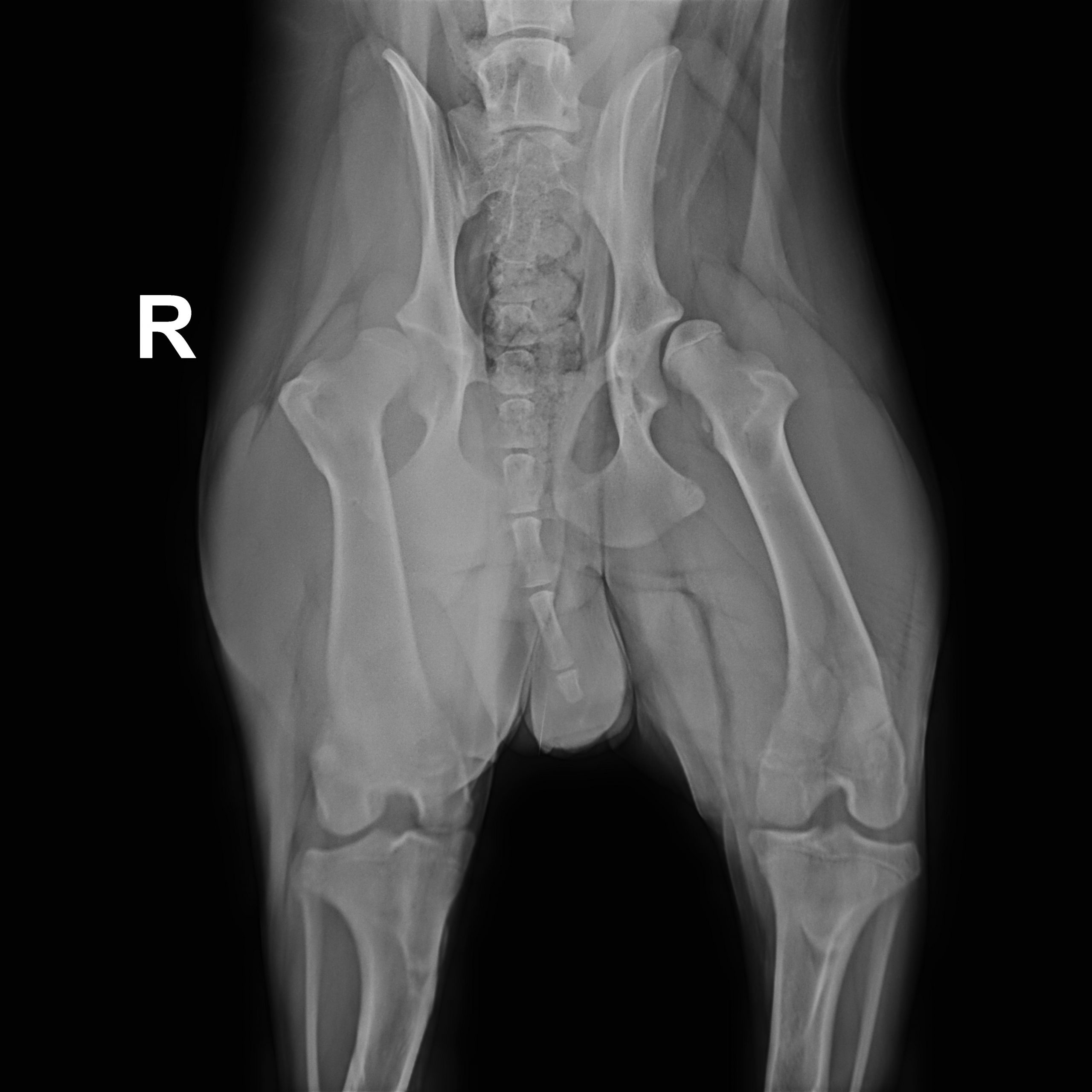