BHRR’s Walter was at the Vet on Friday April 10th for his recheck!

The healthier he is getting, the better he is feeling and the more weight he is putting on. His fabu foster mama says that he is eating very well!

His feet, skin, face etc. are all looking SO much better! He now has toes!

He remains on pred, antibiotics and has now been put on two eye medications for his eye infections. He will require his own bilateral entropion surgery once he is healthier.

We have him on a fish based food and his body is responding wonderfully to it!

The bleeding and lesions all over his body have pretty much resolved, he is not itchy like he once was was, he is more alert, beginning to become playful and is no longer as uncomfortable.

I also gave him a much needed nail trim on Friday. He ROCKED it!

He is on thyroid medication as without it per his previous Vet Records; he was diagnosed with severe hypothyroidism. He had been having seizures and vestibular ataxia.

He has a very long journey ahead of him and we thank ALL of his rescue angels to date for donating to his extremely deserving cause….!

His personality is starting to come out and he LOVES the humans, not so sure of the clinic cat at work and we will be beginning to work on his intergration with other dogs.

We will also begin to work more on his muscle mass and tone. He is lacking a lot.

We are still waiting on the special stain decision on his three biopsies yet, the prelim results demonstrate:

MICROSCOPIC DESCRIPTION:
Haired skin (chin and face): Tissue consists of three punch biopsies of haired skin which have been bisected. There is epidermis and dermis with adnexa and minimal subcutis. The epidermis is multifocally moderately hyperplastic with parakeratosis. Frequently hair follicles are hyperplastic with occasional
sheets of degenerate viable neutrophils, eosinophils and macrophages to ruptured with free hair shafts frequently surrounded by similar inflammation described with regions of pyogranulomatous and eosinophilic and granulomatous inflammation. Occasionally regions of dermis within one sample are expanded by abundant pyogranulomatous inflammation forming discrete pyogranulomas with surrounding fibrin, edema and hemorrhage.

COMMENTS:
THIS IS AN INTERIM REPORT.
Changes are consistent with a significant dermatitis, folliculitis and furunculosis with evidence of chronic trauma to these areas. There is no definitive evidence of infectious agents observed with routine stains. There is no definitive evidence of a neoplastic process within the sections of tissue reviewed histologically. The cause for these lesions is unknown but histomorphologic features and clinical
findings may be secondary to a hypersensitivity reaction within this region with chronic trauma and subsequent enlargement of adnexa with rupture or potentially this represents a deep pyoderma with subsequent trauma and furunculosis. Additional special stains are pending to evaluate for the presence of etiologic agents. The findings of the special stains will be reported in the final report and any additional comments if warranted. 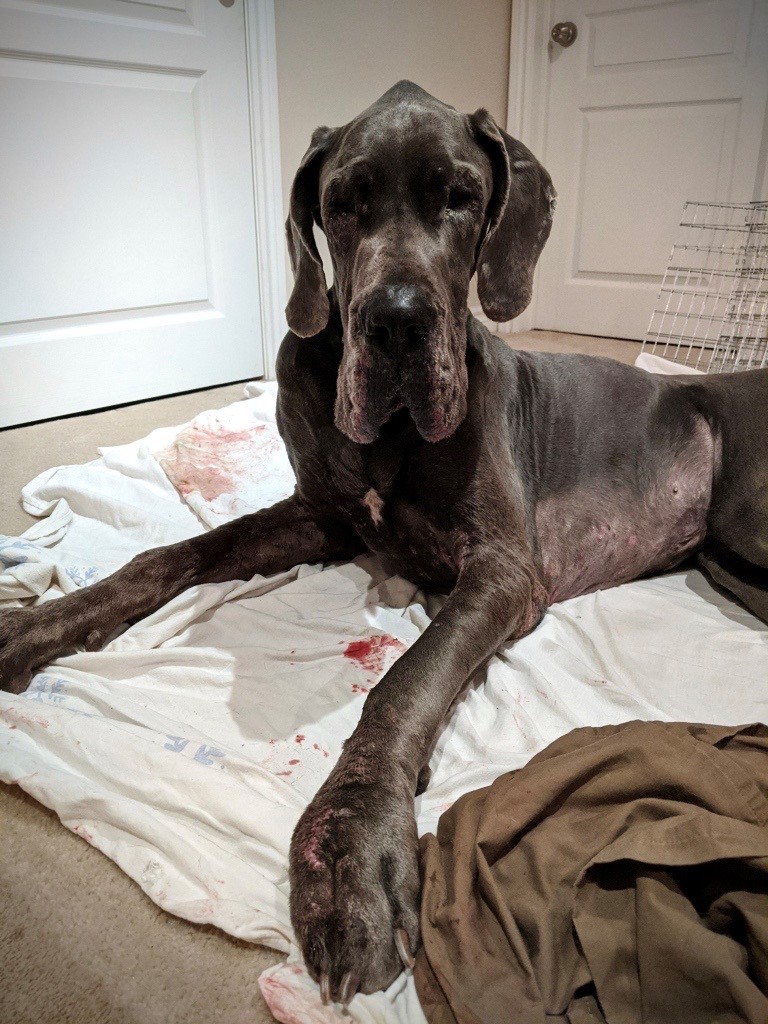