Upon his arrival to myself on Wednesday evening, I was handed a folder. In said folder was what I believed to be the records for what we had been informed to date on him.

We had already received a soft copy of his owner surrender plus the vaccines that he was given in March. We were missing all of the documentation re: why he was on pred, cefaseptin, special diet etc. and felt that the Vet’s findings and notes would be in the hardcopies given.

Unfortunately, those records were not given yet we were given records re: medical concerns that we had not been aware of. He has a Grade 2/3 HM and also a mass/tumour was felt in his caudal abdomen. The words of tumour, lymphoma and intestinal tumour were used and the recommendation to have an Echo and further diagnostics were given. We also were not aware that he had originally been surrendered to one pound on March 7 and transferred to another pound in April – the day after he was neutered.

We had stepped up to commit to this GS and if we had known about these additional medical conditions, we could have better prepared for his arrival and get everything needed in place for him.

We were heading into a long weekend and now are incredibly concerned re: these findings in that paperwork.

I brought him to work with me yesterday and we got a weight on him – he is down and he is quite thin.

The other thing I wanted and anyone that knows me knows I am not a Med pusher and rarely use, then only as necessary and this poor dog needed more Trazadone. We need to get him to a level that he can focus again and go back to basics and build him back up.

I do not believe in using these meds as a crutch. I believe in his case – and I deal with the severely behavioural dogs – that the meds’ that they had him on at the pound should continue and we can take it one step at a time to get him to a good place and go from there.

He is so messed up in his head. He does not know if he is coming or going nor what is expected of him. He is confused, scared, lacks confidence and has been trying to understand and take care of himself in a world where he has not been given any choices and is emotionally hurting. His anxiety level is high yet already we are coming down…..used classical music at work for him too when he was in the run there and very proud of him!

I do not know what his exercise level was before he was dumped at the pound – I could make an expert input position statement on that – for his mental and physical stimulation plus wellbeing yet since March 7, I can guarantee that he did not have those needs fulfilled.

He is frustrated…..so today, and while it rained like a holy terror – we are getting up to 60 mm of rain today – it was perfect for him and I to go to a small subdivision near us and walk….

Not too much outside stimulus in this weather and we got to know each other better – he loves water and he also got to roll in what at some point in time, I believe shall turn into grass!

We got back to nature and the first loop we did, you could see his mixture of hyper alertness with lack of confidence mixing in with the sheer joy of a walk, even in this brutal rainfall. Yet, the more we walked, the more confident he became…his head came up higher, his tail and body posture relaxed and he began to do a more beautiful typical GS movement over slinking/crouching.

We took lots of opportunities to sniff – not overly interested yet he rolled on the ground and splashed in puddles and by the time we finished our second loop, he was enjoying himself a bit. Each time he saw my car he wanted to pull me over yet, a small word plus touch of reassurance, passively ignoring and I was patient. He would then proceed in the direction I asked of him.

I am not getting into a tug of war match nor going to force him or any dog yet I presented him with opportunities and at times, he got to choose what we did or rather he did – I was NOT rolling in the dead grass or puddles! – and at times, I made the decision. What this did for his mental state was huge….he will realise he is important and that I am not going to bully him or drag him.

He was fine with what few cars went by other than one and he made a half sorta effort attempt to jump yet collected well under direction.

I was told how strong he was on his transport and as someone who deals daily with 150+ Pound idjit brained untrained Giants, he was a kitten…. Yet, manners 101 is what we want and by the time our soggy walk was over, there was virtually zero pulling.

Tons of praise for him!

AND tons of praise to him for there is this one home that does not keep their dog in check and on our last loop, the dog came right for BHRR’s Juneau and was barking and circling him and not one peep or lunge from BHRR’s Juneau. I made sure I placed myself accordingly too.

The owner came out, hauled their dog back across the street to their property and stupidly enough, let their dog go yet I was ready and so was BHRR’s Juneau. Not a peep, body stance very aware and he did a re-direction jump towards me as he was trying to keep his eye on the dog and his stress level began to escalate and I remained calm and told him three times he was ok and what a good boy he was. The owner dragged his dog back again and throughout it all, I said not one word to the Owner or his dog.

My focus and attention was solely on BHRR’s Juneau and he handled this pressure moment exceedingly well.

People may note his muzzle….this is a basket muzzle and it gives him impulse control plus self-control. It is also not a crutch. It is an excellent training and behavioural aid.

Dogs can wear basket muzzles for many reasons ranging from those that hoover everything in sight when they are out, to medical – recovering from surgery or in BHRR’s Juneau’s case, to keep him away from his skin to breed bans – which I do not agree with breed bans.

This boy is reactive and this gives him a measure of calm and it is amazing how he just relaxes when it comes out. I associate it with something good when it goes on – PB and leash for a car ride or walk – and is not a punishment.

This boy needs a lot of work to get him to a point of liking himself, being able to make good choices – and he may well never 100% get to that point in all scenarios and that is ok!, having the proper level of confidence, to learn how to trust and for him to know that I shall never lay a hurting hand on him. Ever. No one ever shall again.

We have much to figure out more re: his heart and that tumour/mass and today was his first step in learning how to be a dog and seeing that I gave him a good experience and I was open in my clear plus effective communication that hopefully shall make tomorrow an even better day….

There will be many steps backwards yet this boy has tons of potential and I commit myself to him with my whole heart in helping him become the best dog he can be.

Gwennie Novel yet to all of his growing fan club and to even those who think GS are evil, it is important to update you! For without our supporters, we are nothing…..I could not do this without your belief…..

Thank you with sheer humbled warmth from my heart for that…. 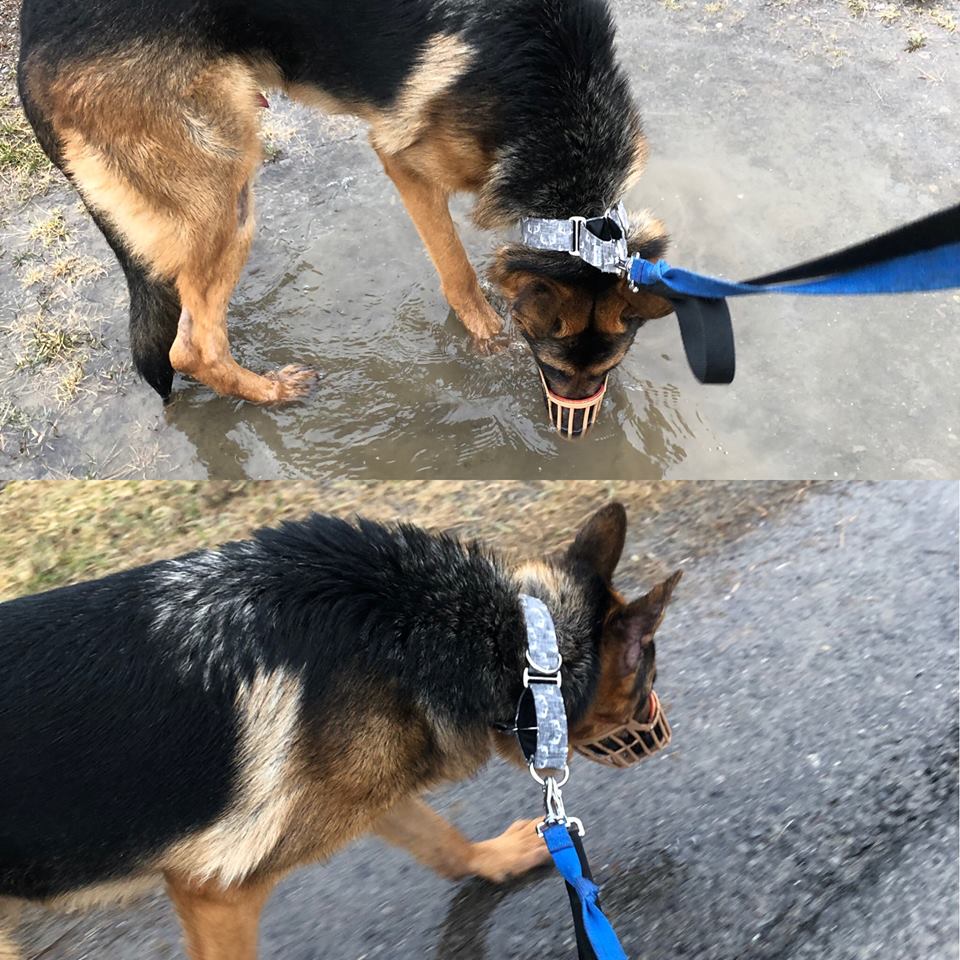