Today, at KAH, she weighed a fairly solid – some wiggling going on – understandable due to her level of anxiety 51.8 kgs(113.96 pounds). That she even went up on to the scale was a wonderful thing.

She is out of shape and lacks muscle tone yet that will come!

She did not have the best of nights, neither did The Boerskins yet we are used to that with a new rescue like her in the home. As her Vet said today, dogs like her ‘is not our first rodeo.’

I always tell my adoptive plus temp fosters in addition to my behavioural clients that as bad as the first night is, the second night is always worse and then there is that light at the end of the tunnel – you just have to hunker down and keep up the ‘tough love’ of passively ignoring and get into the house routine ASAP.

You cannot feel sorry for these dogs….you may want to cry on the inside, yet you cannot on the outside. You need to do right by them. You do not wish to create or enable SA behaviours and we start from the get go about teaching her to like herself and that it is important for her to have her alone time.

AND while today, I questioned a thing or two that happened at work, I do not ever question why I founded BHRR and why I am still doing this 23+ years later.

I only have to look at her and all the others like her over the years to know why I am still doing this.

I am extremely proud of her and as explained to one person today, a wagging tail does not mean that a dog is happy.

A low tail wag or a tail between the legs wag is not the sign of a dog that is 100% comfortable or happy. They are anxious, unsure and fearful. It is a communication sign to be cognizant of and to act appropriately.

Where the success was had in seeing that small low tail wag, is that her tail went from curled up to her belly and lowered as she began to feel a bit more confident and secure.

She remained panting and paced. These remain signs of a dog that is not 100% comfortable with what is going on.

She did eventually lick up some treats too. That was good!

She went from barking at all people to by the time I left, not barking at anyone. Yet, she did bark off and on in her run and that was very present throughout last night.

She has gone through a lot of change over the last 24 hours and this is a lot of stimuli she is being exposed too – car rides, people, dogs, sounds, sights and smells she has never had before.

She does not like getting into the car as that stresses her out – another understandable thing. However, in leaving the Hospital after work, it was just her and me and she did eventually put her front end in the car on her own and I hoisted up her back end. She is always tethered for safety.

She had a good exam – her Vet believes that she is not pregnant from examining her – yet, this is not 100%. We have moved forward with her bloodwork – what a good girl she was! – to do a pre-op plus her tickborne disease and heartworm testing.

I am waiting for her to give me a fecal sample to test. She has not had a bm since she has arrived yet with her minimal eating, not surprising. She is drinking better and better though!

Her Vet took her heart rate at two different times and it had greatly come down as she was becoming less tense.

Her ears were fine and her mouth will be looked at closely at a future Vet visit. There was no need to stress her out any further than necessary to get what was really pressing to be done today.

She began her vaccine protocol – rabies will be done later – and we will start de-worming her plus place her on flea/tick meds.

The earliest we could get her booked in for a spay – for if she ‘is’ pregnant, it would be super early – is April 3rd. I called LAH and their earliest is April 5th with Dr. Liston, so April 3rd at KAH it is!

This post is not a discussion as to if it is or is not right to be spaying a dog if they are pregnant. This Dane had babies when she was 10 months of age. Babies should not be having babies.

AND she is not going to be having any more babies if at all possible. There are so many dogs already in the world that need homes and many dogs are being put to sleep daily as there are not enough homes, that we do not need to be deliberately bringing into this world even more puppies.

This is a picture I captured of her today when leaving the Hospital.

Baby steps young lady….You will be just fine in time and as I said to some of the lovelies I work with, when we go back, you will be much more of an sassy goofy baby! It is in there, I already see glimpses. Your daughter is very much in your splitting personality image! 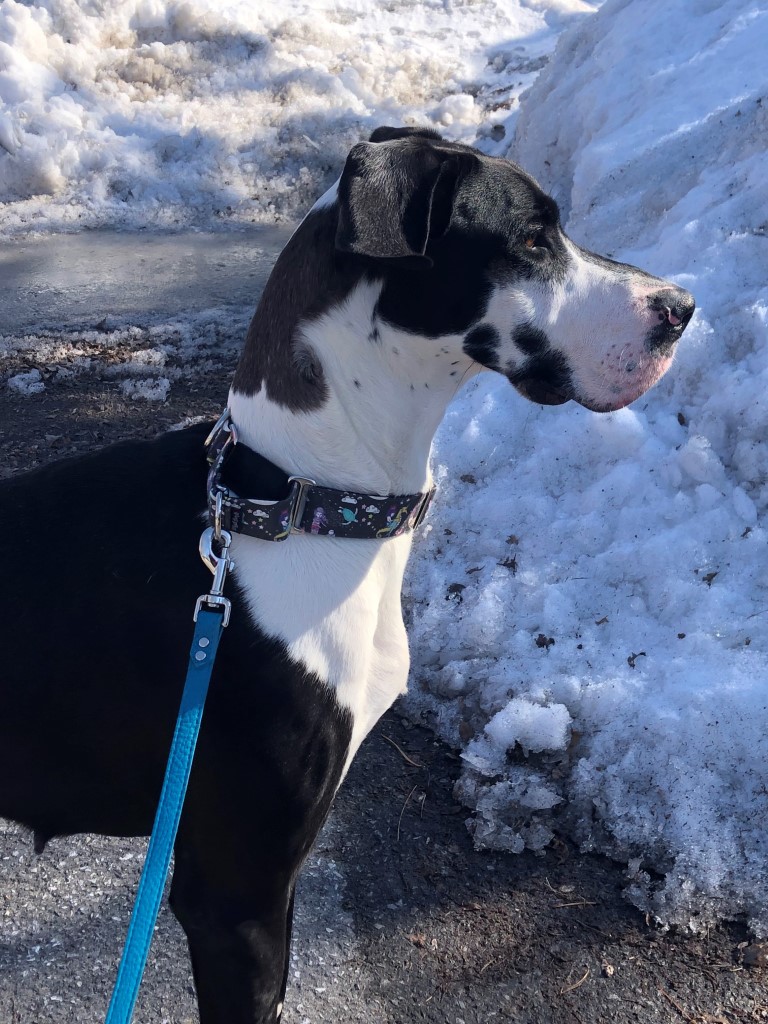