I am going to begin to add some of the testimonials sent my way on this incredible Neo. I am also going to post the three photo's that our approved Volunteer Rachel took on May 28th, 2014, when she picked him up and before, we met. I am looking forward to our upcoming BHRR 'EXPERIENCE' Mini Open House so, that another 40+ people can interact with him, either again or for the very first time and, obtain even more testimonials. It is so important for people to understand just who this boy actually is and, any dog at BHRR is like for that matter. Full disclosure, so important and, for people to know that none of that adoption failure is BHRR's Flint's fault…..none….

#1 Bre & Andrew Jacklin(BHRR Approved Adopters/Volunteers):
"No words can express how we feel about BHRR's Flint. I first met Flint shortly after his arrival at BHRR, he was a sweet boy, my little elephant!! Flint was quick to fall asleep in my lap  and stole my heart after lying with him for an hour or so. During that day he won over all who met him including children, adults and seniors everyone just couldn't get enough cuddles! Flint even let my 3 year old son walk him around and posed for a professional picture with him!

My husband and I recently had the opportunity to watch over and help with feedings for all the dogs at BHRR while the Boer's family was vacationing. We got to spend 10 days with Flint and fell even more in live with him! Every night we left my husband would try and convince me that we needed to adopt him and if it weren't for our current situation I would be completely on board! He was always so excited to see us and was always waiting for affection! Not once did he ever show any signs of fear or aggression towards us or any of the volunteers.

BHRR's Flint, My little elephant would make an amazing addition to the right family and bring so much love and joy  and affection to their lives."

#2 Tracy Barbe:
"I had the pleasure of meeting Flint at the BHRR Open house and the Pet Valu PAWS Event in (Stittsville) this year – April. The adorable Neapolitan Mastiff pup was cruising around the store with his very calm cool and collective stature. There wasn’t a person who didn’t stop to pet his ever so cute wrinkly body that he hasn’t quite grown into yet.  Very well behaved he just sat or laid there and pretty much let anyone of all ages get all the loving in they wanted with him.

I would have to say he loves his treats… while in the store I offered to take him for a little walk around the store, and any chance he got to sniff or test a treat on a lower shelf he went for it, I couldn’t help but laugh and allow him to have one. He’s too cute to say no to!

While at the BHRR open house you truly got to see Flint in his element with his BHRR family, surrounded by the other dogs, some small and some so much bigger then him. To see Flint with the other dogs and interacting with Gwen and her family is a site to see, one big happy lovable family. It’s moments like these that are forever etched in my memory!! :)"

What first comes to mind is a goofy, eager to please puppy, who is still figuring out where his feet are in relation to his body. I picture giant drooly jowls flapping in the wind as he runs tail wagging. I also see a forgiving puppy who is trying to put his past behind him and learn that the world is not scary and out to get him.

Yes, I have heard a low uncertain growl from him, but he has been easily redirected. With a gentle touch and a calm "no" he settles fine. Treat in hand coupled with patience, and said scary person is now a new best friend to Flint.

Under careful guidance, his eyes no longer show uncertainty, but rather, curiosity. His body is no longer tense with fear but relaxed and ready to take the world head on.

With careful molding and shaping, Flint has big potential and he will be a great ambassador for Neapolitan mastiffs."

Please allow me to add my five cents' worth (okay, maybe a toonie) about Flint. Poor Flint.  What is being described is definitely not the sweet boy I was holding and walking. Flint accidentally stuck his head through the handle of an Easter basket, and he just continued to wander with it hanging from his neck without being fazed at all."

Flint has turned out to be such a sweet and gorgeous boy, and I just love him.  I first met him after the Dine with the Animals event last year shortly after he arrived at BHRR.  He was such shy little thing.  I could see he wanted some attention, but by being patient and waiting and not pushing, he eventually came to me and a couple of other late hangers on for a few pats.

When I saw him again at the November open house, Flint was making the rounds going from person to person for some loving.  He was a huge hit, and I was happy to see that he was not showing any ill effects from the attack on him. There was such a major improvement in his friendliness and comfort level among so many people/strangers.  It was after everyone left that I got my one on one time with him.  What an amazing difference from our first meeting.  He was not shy about nudging me gently for his share of my attention and fell asleep with his huge head on my foot!  I believe I fell in love with him that night!

I didn't get to see Flint again until the Saturday of the Pet Valu Stittsville community awareness event in April, as the February open house was canceled.  I couldn't believe how huge he had gotten – that head and those paws! – and what a lovely boy he had become.  He was so open and friendly with all who came into the store and was especially excited to meet the children.  Flint would lay down to be at their level so that they could pet and fuss over him.  He was incredibly patient with the little ones and so gentle when taking treats from them.  Again, he was a huge hit with everyone from our volunteers to the store staff and customers.  Flint was just as happy to wander around the store and BBQ area while with me or to stay quietly behind the table as I dealt with questions from people interested in BHRR.  He was a fantastic ambassador that day!  On a personal level, Flint was a dream – he listened and walked so well while on leash, and he would look back at me when we were walking to check on me.

My favourite memory of Flint that day was walking him around the store and letting him explore.  Easter baskets had been set up as part of the photo area, and Flint eagerly stuck his head in one to check what was inside.  When he lifted his head, the long handle of the basket slid over his head and onto his neck.  He looked up at me in surprise, and I told him it was 'okay'.  As I reached to remove it, Flint walked off to continue exploring with the basket hanging from his neck (think St, Bernard with a mini keg – LOL!).  There was no anxiety or fear at all.  A couple of store employees saw him and laughed.  Flint was so cute.  Unfortunately, the photographer was not there and we didn't have a camera/cellphone because I would have paid good money for that picture! 🙂  I let him wear the basket for a couple of minutes before taking it off.

I had never thought about owning a Neopolitan Mastiff before being partial to black Great Danes as many know, but I decided that night to bid on Flint as my Date as the auction had just started. I checked with Gwen about my available day for the date should I win, but did not tell her who I would be bidding on as I wanted to surprise her (all my previous 3 dates had been with black Great Danes) .  I held off a bit before putting in my bid on him and had a couple of other bids in the works as well.  I ended up in a bidding war with other interested parties, but I was determined to have an exclusive date with Flint so much so that I forgot to monitor my other bids in the last fifteen minutes.  I can't tell you how excited I was to win the date with Flint and even more excited for him to learn that he could potentially be adopted before our date.

Flint is a superb dog, and I have never encountered any aggressive or negative behaviour from him towards people or other dogs.  With consistent training and reinforcement of the groundwork laid by BHRR, I have no doubt that Flint will continue to be the fabulous well rounded dog that anyone would be proud to call their own as he matures.  When I am ready for my next dog, I will have to give serious consideration towards the Neopolitan Mastiff thanks to this wonderful, sweet puppy boy – for he is still very much one!

I was so surprised to read that Flint is back at BHRR, but THANK GOODNESS he is!  Wow!  What that person wrote about him being fearful and growling just didn't sound one bit like the sweet Flint I met last fall!  He met so many people at the Dine With The Dogs and at the mini open house (me included) and was so friendly and so receptive of pats and loving!  When I read that he submissive peed when he saw Sean, my heart just broke.  Something bad must have happened in the short time he was at that adoptive home. 🙁  I'm glad Rachel was able to pick him up and get him to you right away!

Please give wee Flint a hug from all of us. 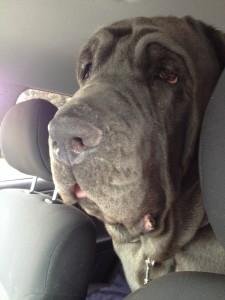 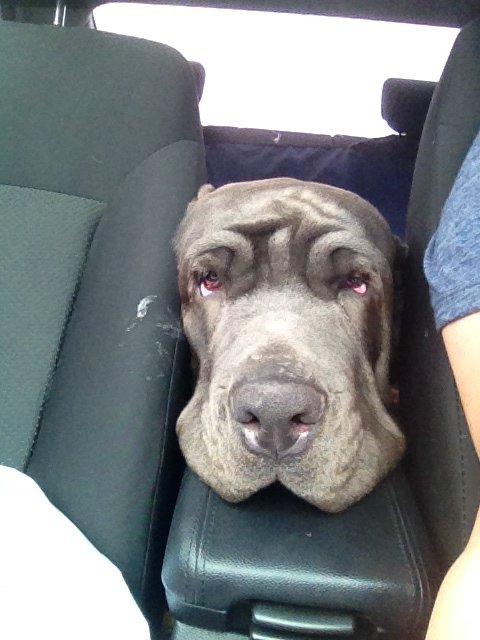 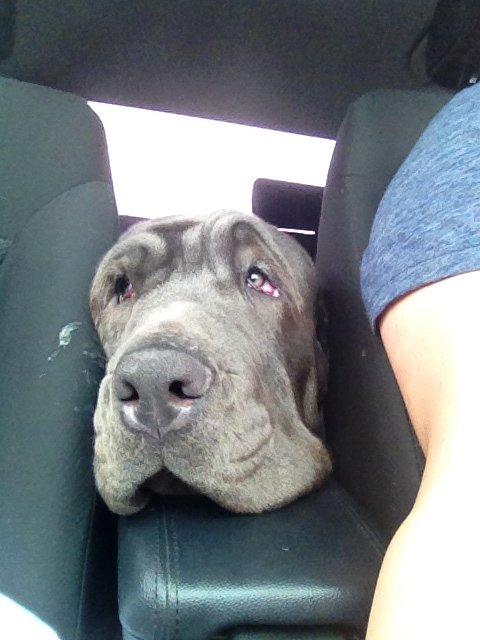