This GD first came on our radar back in November of 2013 – I believe it was November 13th to be exact. My understanding of the story was that he was picked up as a stray and, had been adopted out by this US based HS several times and, each time came back, as he has severe SA. His name had been changed often lending to his continued confusion and with each return, his SA increased.

We were contacted for possible r/q Rescue assistance, stepped up to the plate and, the week he was to come to BHRR, we were informed that the current temp foster home that had him, was going to adopt him themselves. He was apparently in need of someone with him 24/7 and, had a tail injury and, had been making progress with this home and they, loved him. He was said to be ~2.5 years of age.

We wished all the very best and, moved onward to the next dog in need of our programs at BHRR.

Fast forward to March 19th, then I received an email from the Director of the HS with the following information – SEE below in bold. We then responded that we would step up to assist and do a formal evaluation upon arrival to BHRR. His ETA to BHRR is on April 5th.

The last dog BHRR committed to was on December 24th, 2013 and that was BHRR's Angel Noelle. This is the first dog for 2014, that BHRR is bringing in. With the heartbreaking loss of two dogs in our Haven Program(BHRR's Breen & BHRR's Zara), one dog moving under a pending adoption(BHRR's Reese), and, another dog possibly moving under a pending adoption(NYA), we are comfortable assisting one more dog in our programs at this time.

I spoke with you a few months back about a Dane we had here at our shelter. The dog went into a few foster homes, and then the last foster mother decided on keeping him.

She has done a lot with him and we have seen a lot of improvement. However, she would now like to rehome him. It is very hard for her to do so, but she has a small Chihuahua and she is afraid that he might hurt her.

Working in rescue I understand that space and resources may be very limited (and I am sure you get this all the time).

The person who adopted him gave me this information about him:

3.)Will wait (sitting) for food until release word "ok".

5.)He does not guard his food with people but will with other dogs.

7.) He needs a training collar or prong collar on leash. He is not for first time dane owners.

8.) Gets along well with other Danes.

12.) Can be protective but once meeting someone he is fine.

13.) Could be aggressive with small dogs.

14.) Probably not good around farm animals (she has a small farm and has not felt comfortable letting them interact)

15.) Does not bother cats when on leash, but probably would chase and chew if loose

16.) Can be left in house with other Danes when gone (just move the trash can keep food off the table & counters).

The owner does not want to bring him back into a shelter environment, but each day is getting harder for her.

Thank you very much for all that you do! 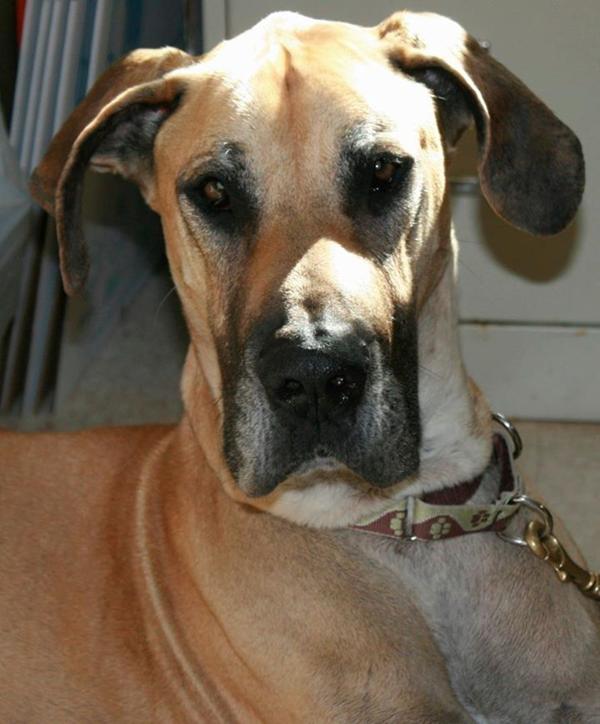 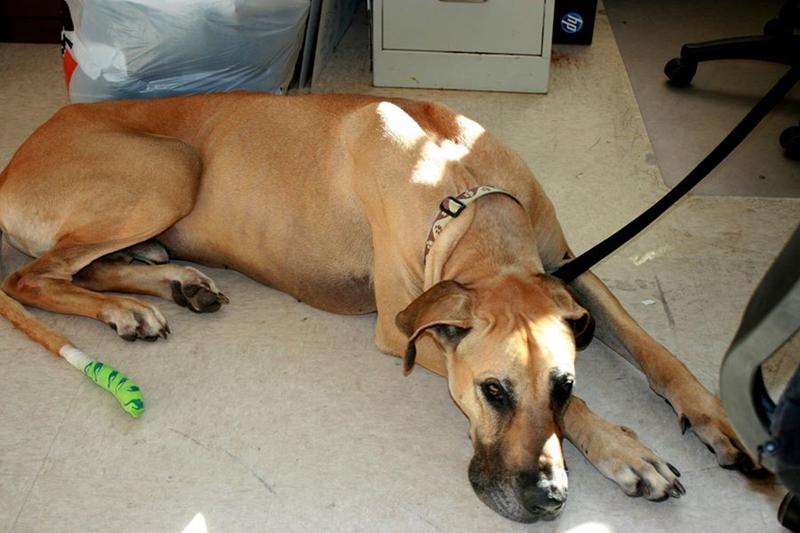