BHRR's Mav came to work with me on Saturday and is up another 4.62 pounds! Still needing a heck of a lot more, after, losing weight while I was gone AND that he was still putting it back on from his last surgery, yet, so many beautiful comments plus compliments on his shiny black coat. We did his nails and other than being wiggly on the last 1.5, he was awesome! 🙂 AND, so many words said about how packed in muscle his butt and quads etc. were. 🙂

ALSO, received were many compliments on how FABU his 'iron man' legs are! 🙂 YAY! I have decided that when he makes his special announcement that I will reveal his 'reality slide'. 🙂

He had his special date yesterday and, THANK YOU! THANK YOU! This home has taken out a number of our dogs and, it really warms my heart to hear the feedback on their day trips FOR, these are dogs that have come so far in their rehab and are beginning their journeys sans me and, makes me so proud to hear how 'model citizen' like the BHRR doggies are out and about in public! 🙂 From excellent leash manners(maybe not the  'do not' shop all you want skills with taking treats! LOL), to their dog to dog communication manners, social skills etc. YET, I always say, that a dog will blossom in the right hands and, this home has the right hands to help these inspirational dogs continue to heal and bloom. 🙂 THANK YOU!

He was only worried about two men yesterday – one was a cat person and loomed over the counter at KAH and, the other, just went in his face and for BHRR's Mav, that is not the right approach to take. You need to be non intrusive and, if you are patient, this dog will lean into you, be a total gooberhead, kiss and snuggle and sit on you. Many a person that has come to BHRR has born witness to just how much personality this boy has! He is a loud and rough player when he plays yet, his house manners are really wonderful. AND, when he is worried, he will step away and avoid. I keep telling people NOT to push him…this is a Kanga-Dane and when he trusts you, he will lay all of his heart out to you. 🙂

So, when the home came to take him out for a few hours, we sat on the benches at KAH, they fed him treats, were patient and well rewarded. I told them that once he left KAH(he has had so many procedures and much require vet visits….AND, even when I tried to bring him in just to visit, people were always looking/touching at his legs etc…), he will be a changed dog. AND, he was! 🙂

They took him to CocoMutts, B&F, to Timmie's and, even a bit of a walk. 🙂 WHAT a gift this home gave to him!

He is such a nosy parker…twice, he opened the door to one of the exam rooms, to say 'hello' to the Vet and the dog and person in there! LOL If someone was doing anything, he had to go investigate.

"….as he just kept moving around to sniff and visit! He is a wonderful boy Gwen and as said yesterday, would jump on a chance to take him out again. Sound gentleman to be with.

Thanks for entrusting him to us."

Once we left KAH, he came with me to do a HV and three hours later, was still impressing that home with how fabu he was! 🙂 HE was great with their two dogs, their wee human baby at just over 1 year of age and she accidentally stepped on his tail, toes and batted him gently with her wee hands, and, he was very patient and tolerant and, I think he crushed on her a bit! 🙂 AND, he did not try to snag one of her toys or drink the tea on the table yet, he did eye up those yummy cookies! 😉 Three hours went by in a flash! ANOTHER huge thank you being sent out to this home for all of their own patience, understanding and warmth.

By the time, we were leaving, he was feeling bold enough, to try and be on their couch. 😉 AND, he listened wonderfully, when he was asked by members of the home to get off.

He even had his first elevator rides and, what a pro! Walked right in, just some mild nerves when the elevator doors closed and began to move yet, was so proud of him and he was of himself too(I think!).

Two photo's of him from yesterday. 🙂 Now, that his legs are straight, he loves to lay with them out in front of him and rest his head on them. 🙂

I also know that from being away, one of the kind individuals that were here, made a comment in an email about how they were still secretly hoping that BHRR's Mav would submit an application to 'adopt them, the human'! LOL 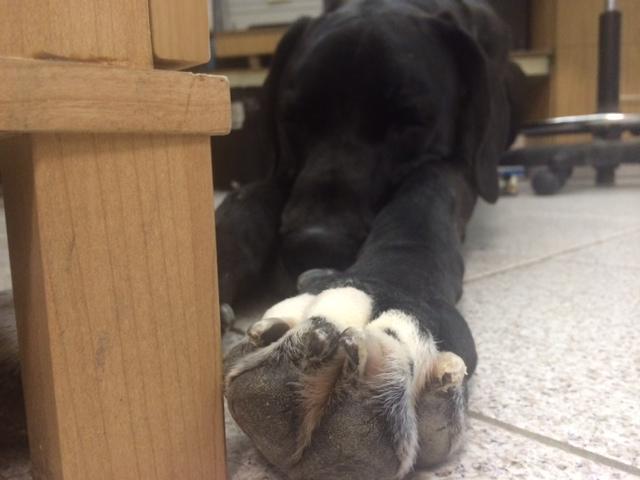 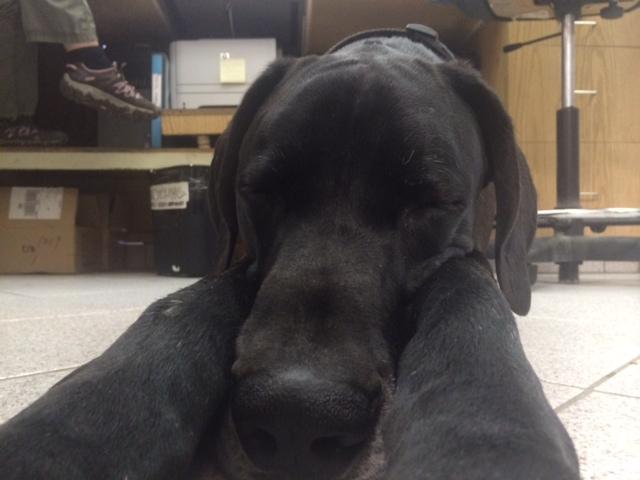