Sean ended up making the drive to meet Lexy's Breeders today. I stayed home to take care of BHRR's Potter. In a show of their appreciation, they donated two bags of Dog Food – FROMM and $50. THANK YOU! As mentioned to them via email;

"It is what we do here, help heal Great Danes, physically, emotionally, behaviourally and spiritually if needed. JAND help get those back to those Breeders that stand by their dogs. 🙂 " Two pictures of Lexy from December 13th, 2010 are posted below. She has put on even more weight plus muscle mass and has been really coming out of her shell. You can see how much more confident her head plus body posture is and she is actually running/playing! I have been separating her from BHRR's Bailey, the oher Dane that came into BHRR from the same home to give them both the best chances of avoiding SA behavours in that avenue and BHRR's Hailey seems to be handling it ok at this time. YET, BHRR's Hailey is also very busy with the other dogs at BHRR as both a mental plus physical source of stimulation. 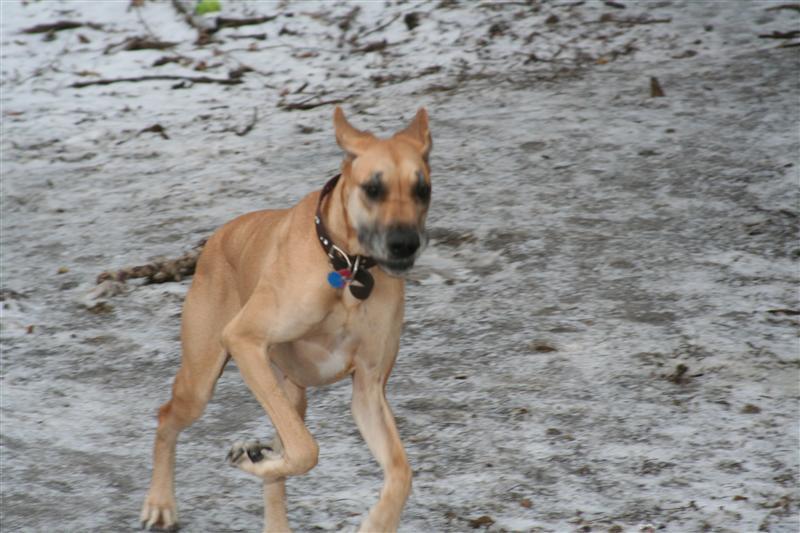 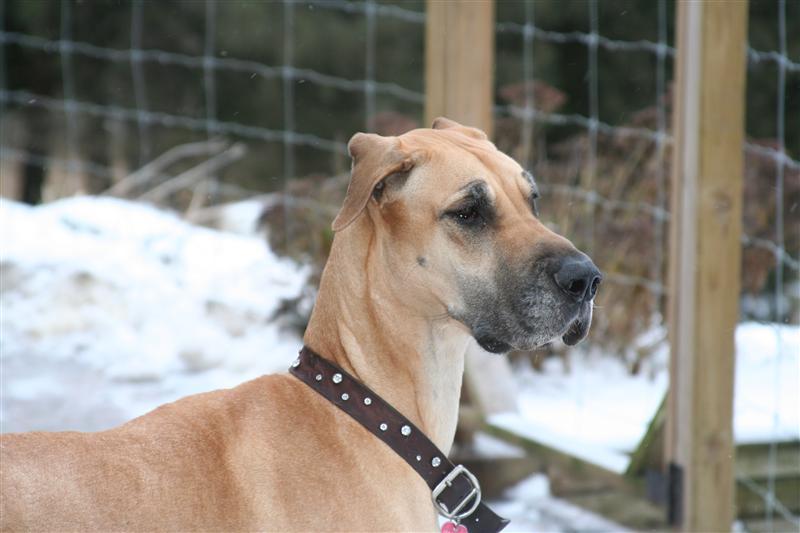 Plans have been made for myself to drive partway to meet Lexy's Breeders on Wednesday December 15th around noon.

Made contact with Lexy's Breeder and we shall be making arrangements such that we can meetup with them partway(they live quite a distance from us) to return her to them. The tentative plan is to do this early next week – Tuesday yet more likely Wednesday with all the snow expected our way. Though we are aware that some GD rescues shall not work with GD Breeders; BHRR believes wherever possible we shall do so with what we believe to be reputable/quality Great Dane Breeders. I have to say that I am going to miss her though! I have already developed quite the spot for her! 🙂

In the below photo, you can see that she is already putting on weight…..slow and gradual. 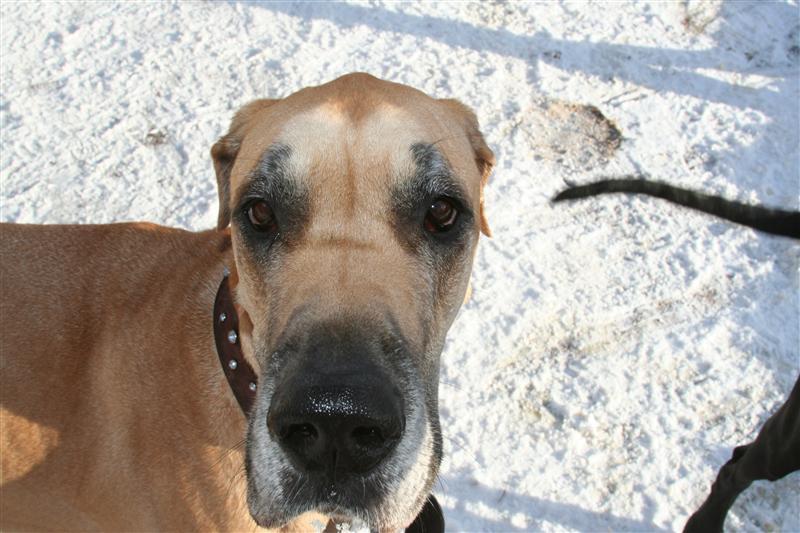 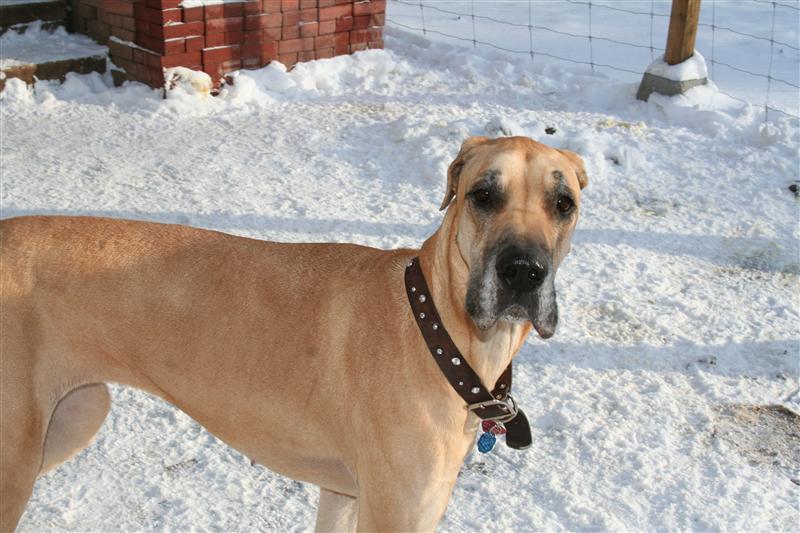 Now that BHRR's Lexy is settling in a bit better, her comfort level is getting much better and in being able to handle/love and touch her much more and all over; I noticed a tattoo. In doing some researching, I have managed to locate her Breeders. I am aware of these Breeders from also being part of the GD Show World and have been trying to make contact with them. Their contract states that they do take their 'dogs' back and as I told Sean, BHRR's Lexy has a 'look' about her that is not the typical 'byber type'. When I have tried to call them, the line has no vm and it 'hangs' up. I have since emailed them plus posted a 'request for contact' on one of the exclusive GD boards that we both happen to belong to. Will update as I can and took more pictures today! I have only two of BHRR's Lexy that I took last Friday and did post one on our BHRR FB Group and they are now on here!. 🙂

In the AM of Wednesday December 1st, we were contacted by a person from Golden Retriever Rescue, Quebec who also works for several women's shelters. Two Great Danes were in need of urgent help to enable a woman to be able to leave a very dangerous and violent domestic abuse situation. All I can truly say that what happened next was nothing short of incredible. There are studies that have indicated that up to 48% of women will not leave an abusive relationship due to their concern about their animals. 🙁 So, we mobilized immediately to see if BHRR could step up to assist.

We sent word out through our BHRR network that includes our BHRR FB Group and it was only 28 minutes later that we were able to commit to these Great Danes. 28 Minutes!!!! We had two approved Temp Foster homes(and so many other people sending supporting words, emails, voice messages, offering to cross-post and willing to go through the application process to become a BHRR approved home) on board to help these Danes plus their previous Owner. We received 7 offers just in that time frame alone from such kind and caring people offering to temp foster. AND at this time, we had no idea where these Danes were as in distance or their medical plus emotional state, their colour etc. FOR at the end of the day, what we are known to say is, 'IT DOES NOT MATTER'! Reputable/quality rescue is about helping the next one in need. We knew what was most important – that they needed help; that their previous Owner needed help; that if we did not help; they plus their previous Owner were in a very dangerous situation or that they also could have been pts. We were made aware that they were 2(turns out that they are 3 yet no matter!), spayed, female and had demonstrated sweet calm temerperaments with no known human bite history. What BHRR prefers to do wherever possible(not always feasible due to distance sometimes of these requests and that we would then have to organize transport to BHRR) is bring any new addition direct to BHRR so that we can formally behavourally/emotionally and medically assess/evaluate the animals. Our protocol does state that all new additions ASAP must come to BHRR.

The person that contacted us was so worried about this situation(space in women's shelters are not easily come by) that she offered to make a donation if we could commit. I wrote them back saying that while BHRR appreciates monetary assistance(we receive no corporate, provincial nor federally support); we are assisting because we just have to and that her offer stressed to us just how urgent this is and HOW caring she also was. BHRR declined to take any form of monetary donation in this matter.

So, what was planned is that BHRR's Lily Belle and BHRR's Ava Marie would go to BHRR approved temp foster homes and BHRR's Lexy plus BHRR's Hailey would come to BHRR. Due to the urgency of this situation; we needed to get the animals and the woman out as quick as possible; so the person from rescue went to get the animals yet the police had to then be called for the man kicked BHRR's Lexy in the head and the woman then became undecided about leaving herself. What then ensued was a very stressful and worrisome time to try and get all out safely.

By 2 AM on the Thursday AM, Danes plus the woman were safely removed and by 4 PM on Thursday December 2nd, I had both Great Danes in my arms. Also, during this time, it was the closing day of our 3RD Annual 'JUST IN TIME FOR XMAS' Online Auction, I worked a 7:30 AM – 4 PM Hospital shift and was dealing with several other matters on my plate including a BHRR Pending Adoption and doing a hv for another Rescue plus a hv for BHRR! YET, it all came together and this is one of the best examples EVER of that 'chain of success' of people pulling together to make the difference in the lives of others!!!! THANK YOU! THANK all of you!!!!

Early on Saturday December 4th, BHRR's Lily Belle went to her temp foster home – miss her yet she is going to have a blast for she already knows this home – and unfortunately, due to the tragic loss of BHRR's Storm on Saturday; we no longer had need of BHRR's Ava Marie to be temp fostered as we had that 'one' spot now at BHRR. 🙁

BHRR's Lexy & BHRR's Hailey are NOT YET AVAILABLE FOR ADOPTION!!!