BHRR's Atlas has his first CWW – Canine Water Wellness Session today and I am sooooooooo proud of him!

He came readily out of the house and it was not until we got close to the car that he began to become worried. My safe word for him is 'trust' and with some major trust on his part and a bit of tough love on my part; he got into the car and we had an uneventful trip into CWW; which is about an hour away in good weather.

I deliberately parked far away and we had a nice leisurely stroll to CWW. We passed cars and people and BHRR's Atlas took it all in stride. He even showed off by lifting his leg to pee on a bench!

When we arrived, he did not want to walk through the door and I used his safe word 'trust' and he then walked into CWW. The trust that he has given me over the short time he has been with us is humbling. Just humbling.

On a side note; he has put on almost 40 pounds of weight plus muscle mass since he first arrived to BHRR last November.

When we arrived, he had the 'rejected' look – head down, averted, tail down and it is his 'If I cannot see them, they cannot see me and hurt me' stance. So, we took about 15 minutes, talked and both Jen and Lianne touched him and we let him relax. When Lianne stopped loving on him, he moved a bit closer and stood still. This is his sign and that he is very quietly hoping that he will be petted some more.

I then used the 'trust' word and he followed me to the swimming area; never minding the two dogs belonging to the owners and he was fitted into a lifejacket and after using the 'trust' word again; up the ramp we went and in the water he went.

No big build up of stress or anxiety for him and it was not long before he found his balance and rhythm.

I was his 'motivation' to want to swim and so my video is not the best…SORRY! I was trying to video tape, go up and down the wet ramp, stay balanced and encourage him PLUS I was just so excited for him!!! 🙂

BUT, here is the short VIDEO! By the end of the session, he was swimming unaided.

He has a long way to go to build up endurance BUT that is one reason why we are here, that and to continue to work on his mental plus emotional state. His next session is Thursday February 2nd and I hope to bring him every 7-10 days. If anyone wishes to assist with his hydrotherapy bills; you can contact Canine Water Wellness directly.

I am also going to post a few pictures below of his session! He showed some interest in their treats plus water bowl yet was not quite ready to take any but by the time we left; he was wagging his tail and taking treats from Lianne!! WTG Atlas!!!

It was a good session. I had no expectations other than that we would arrive and see how things went.

He was so tired at the end that he just was standing on the bench; literally falling asleep as they massaged him!!!

He was very relaxed as we walked back to the car and after a bit of a 'moment' with getting into the car; he then got in and settled down for a good ride home. 🙂

I stopped at McDonald's and he had his own Chicken McNuggets. 🙂 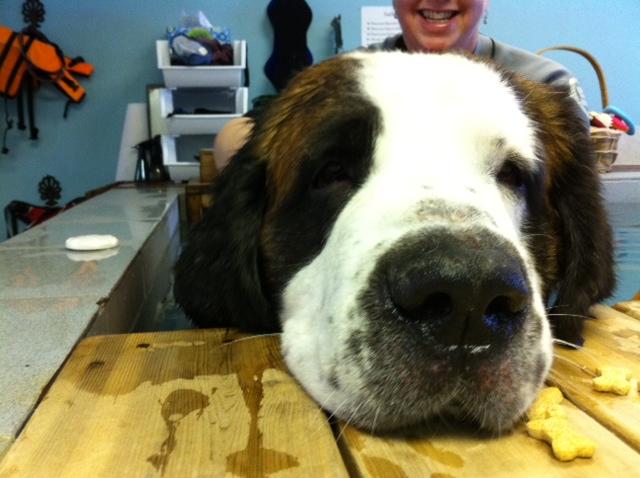 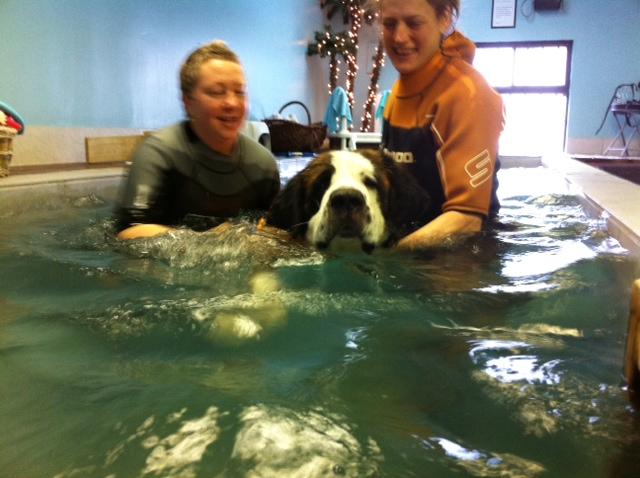