He has done most wonderfully with his rehab at BHRR.

Any new home MUST understand though that he has had a bad life of hell before he was seized as part of the 547 dogs from PRU in September.

He needs a firm yet gentle hand for guidance. He needs a leader who is fair, keeps up with his obedience and can instill trust and respect and understands that this trust plus respect works two ways. HE does not need corporal correction and we do not tolerate or approve homes that act in such a manner.

He can be vocal in his displeasure of anyone taking his collar to quickly by giving a worried soft sound; so; slow and calm is the way to handle him.

When you ask him to get off a dog bed etc;, he will also be vocal in sassing you back and he will also give a version of this soft gruff sound when he is content(almost purring).

He needs very careful correction – soft yet kindly firm for if you overdue it with him; you shall only terrify him and that will ruin him. He has no need of a strong tone or voice.

He is just a really softie inside who had tried to develop a strong exterior in his efforts to try and survive at PRU. Some of the older boyz here have figured him out pretty fast and want to try and push him and we will not allow that. Even BHRR's Freedom, another FREEDOM DOG will now try to body bump and almost bully him and that is not going to happen. Each dog will be shaped and guided to build up their self-esteem and self-confidence in appropriate manners and behavours; not by being bossy and a 'boob' to other dogs to make themselves feel higher or better.

He is a baby who nobody cared about until he was rescued back in September and  began his rehab journey at the ES. His story is WHY people should not give dogs away for free, WHY they should alter any dog before selling them; WHY homes should be screened and home visits should be done etc. OR surrender your dog to a r/q Rescue if you do not feel that you are able to keep your pet or cannot show due diligence in altering etc. before selling. He is a victim amongst thousands and thousands yearly that fall into the wrong hands. 🙁

From the moment he was seized in September, caring people have told him how much he means to them and since his arrival to BHRR; we have worked hard on his confusion, fear and sense of loss and belonging in a world that had been most unjust to him to date.

BHRR's Cobalt can be a bit particular about his friends – male in particular. He finds BHRR's Riley a bit too much in goofy and energetic movement plus antics.

He would do wonderful in a home with a like minded and personality fit other dog and it does not have to be a female; and he has loved all ladies to date here. Males from where he came from were competition around all those females in heat and some males; do worry him. He resides in complete harmony here; even with clown head BHRR's Goliath and our Sir Maestro; yet as mentioned BHRR's Riley is a wee bit too much for him and even BHRR's Benjamin causes him to look at him sideways as if to say 'are you for real?' LOL

We calmly reassure him, redirect and re-focus and passively ignore and our calm and comfortable/confident demeanor makes him realise that dogs like BHRR's Riley and BHRR's Benjamin are harmless, even if they are static, flighty goofy boyz!

BHRR's Cobalt is more of a 'serious' boy and that is tough to see in a way. He is so young and should be romping and running carefree yet he does not. He is a thinker, sometimes too much and needs plenty of exercise and a good strong stable social network of friends both human and canine that are great personality fits to keep him continuing on this excellent journey he has begun.

He has also discovered the joy of cuddling!!! 😉 Photos below are from January 1st, 2012 with Sean. 🙂 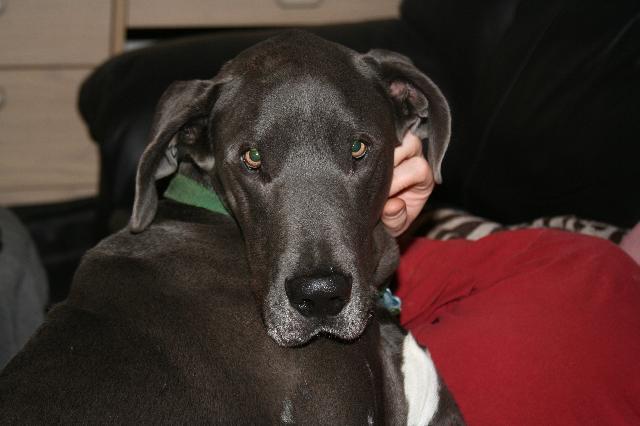