BHRR's Veteran had a good night.

He has not made a peep in respect to growling, lunging or barking at BHRR's Atlas nor any other dog.

He is eating well yet is now on antibiotics for his neuter incision is slightly infected. I will always remember fondly getting the call from one of the wonderful Volunteers who went to pick him up saying that he and BHRR's Atlas had not yet been neutered. I mentioned that what often can happen is that there is a lot of post-op swelling and the dogs can look very well endowed afterwards. Well, BHRR's Veteran is definitely very swollen and several of his sutures have let go and I am sure that he has done some liking of the area too.

So, he is a 'cone' head and on antibiotics right now. He is taking it all in stride.

In the daylight of Monday, I could see him so much better and his hair is so dry and so lacking in oils. He is missing a lot of hair in many areas too. He needs a bath plus a nail trim and just as with BHRR's Atlas we shall get there.

Just as with BHRR's Atlas, he has had four walkabouts on Monday on his own and has done well. He is weak yet not as weak as BHRR's Atlas and his mental plus emotional state is also better. He tends to not have as much of an 'exhaustion' rest as BHRR's Atlas does.

I feel that he is much closer to 2.5-3 years and am giving things the benefit that as life has treated him so unkindly that he might not even be a bit older. ON the other hand, he could well be closer to 2 and due to it being such a hard life, he looks older. So, we are officially having him listed as 2.5 years of age for now.

For those that have expressed an interest in him, he is not going anywhere for a very long time. We are on his schedule and when/if he is ready to be adopted, he will then be done so. I cannot say for sure that it will be in a month or two months or….or…

He just arrived to BHRR. We are still getting to know him and learning how to best give him what he needs and build him up emotionally and physically. These things cannot be rushed and we won't let them be rushed.

I know that as a 'survivor' this dog is going to have personality and inner strength so when that honeymoon period is over, I am sooooooooo looking forward to experiencing and learning about who is really is inside and how his life experiences have shaped him and yes, even how his genetics will have shaped him to make him 'who' he is today.

Just as with BHRR's Atlas he often can be found in a tight ball with his back to the outside of his crate. If you are with him, he will lay a different way and watch you. He wags his tail more than BHRR's Atlas yet is also quite submissive in many ways.

Below are two photos taken of him. They honestly do not really show how badly his ribs, hips and spine show. He will need a good 35-40 pounds of muscle mass and weight on him.

He is sleeping on a pile of blankets right now and thanks to the generous heart of a special angel an XXL Kuranda bed is headed his way! We shall pile dog beds and blankets on top of that for his joints, elbows and hips plus for pressure sores.

PLEASE CONSIDER SUPPORTING HIM:
Monetary donations to do bloodwork including a heartworm test, to purchase flea/parasitic/hw preventative meds & food
*One can donate by PayPal or email transfer to gwen@birchhaven.org or by mailing a bank draft to 'Birch Haven Rescue & Rehabilitation Services(BHRR) and mailed to: 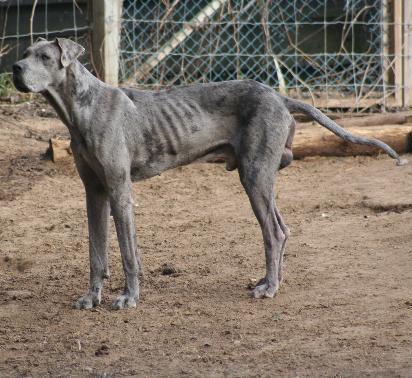 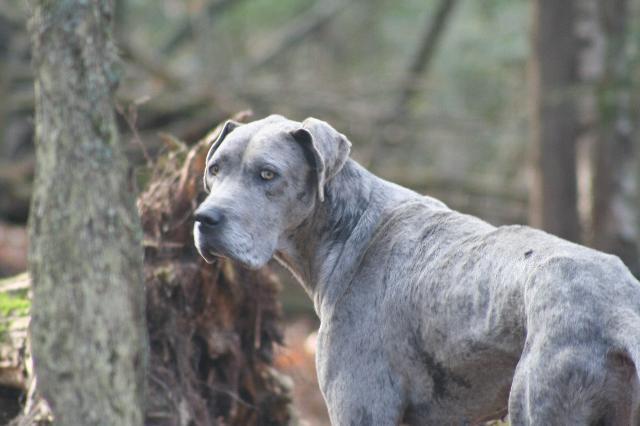