NEXT IN NEED – Picture quality is poor!

Mrs. was visiting in Texas, when she got this Dane in March 2019 from an ad from a kennel they had been following – was in the back of an open trailer – two hours tied up on the highway and had been sprayed/traumatised with a hose while tied up in the open trailer, when they met somewhere to pick her up.

Spouses are fighting over what to do with her – Mr. wants her gone now or killed, Mrs. was trying to do the right thing and sold her but she is now back with them and more fearful then ever.

She has now been signed over to BHRR. 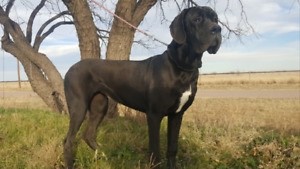