This is BHRR’s Rion – One of the two Danes from the Drug situation.

Sean has spoken and both finally have names – they did not have any names prior to Rescue.

As many are now aware, they belonged to a man who who went to jail for drugs and his father – also involved in drugs – took the two Danes.

Another man saw an ad on kijiji for chickens and when he arrived on the property, he was asked if he had any cocaine in exchange for two Danes.

The man said that he did not do drugs and when he saw the Danes – the male in particular is in terrible shape, he came back with his horse trailer and paid $100 for the Danes.

As the man was not comfortable with Giant Breed dogs nor did he know how best to assist them, they ended up with us. THANK you again Meg for all of your help! Picking them up and meeting me.

I had them both at the Vet immediately and the male weighs a severely emaciated 50.9 kg(111.98 pound). He will need at least 40 pounds of muscle mass/tone/weight to become healthy.

He is the sweetest boy. Reminds me a lot of BHRR’s Mr. Parker Paws in his handsomeness along with his lack of smarts – who on a side note also came to BHRR severely emaciated.

He is flat in the pasterns, has lick granuloma’s – one is still bleeding, is very weak – cannot be on his feet or move for any extended period of time, is ‘wonky’ in his hind end – especially the back left, has healing wounds all over – one of the wounds around his eye is a really fresh one(he is very lucky that he did not lose the eye), he has scars all over his body/face, needs a dental, we did a testosterone test as it is believed that he could be bilaterally cyptorchid – Dr. Liston could not feel any testicles even in his inguinal ring.

His Vet found him to be quite nearsighted as we expressed a concern re: his inability to see treats etc. when offered and other than saying that he was nearsighted, the rest of his eye exam was perfectly normal. His Vet said that his own dog is quite near sighted and not a big cause of concern.

His Vet did say that he did not like how much ‘gurgling’ was going on in his gut.

We also did bloodwork to see how his internal organ function is doing along with a Heartworm/Tickborne disease test. He is now being de-wormed too.

He was very smelly and his coat is full of dander. His ears were extremely full of dark waxy debris.

He has pressure sores and many callouses.

We are also deeply concerned re: what appears to be immense bruising all along one side of his body and into his groin area.

Dr. Liston could not rule out if this was only brutal trauma and not an underlying medical condition too. We are hoping the bloodwork may reveal some answers.

In this picture below, it still does not capture just how emaciated he is….it is hard to show his horrible level of emaciation being a black dog AND to put it in perspective, I can put both of my hands easily around his waist….THAT is not normal and not acceptable.

No dog should be in this condition.

We are feeding him 8 small meals a day trying to very slowly jump start his gut/stomach.

I will post re: the female tomorrow. I once thought they were siblings, yet I think she may be his mother.

Donations to their ongoing care can be made direct to Liston Animal Hospital:

1) A martingale collar to call his very own. As onepawtwopaw is on a short break, we are still going to WiggleBumz for our collar needs and they are equally lovely!

2) He needs an XL Costco Dog bed of his very own too.

Thank you to everyone from my heart once more that has contributed to their bills to date.

Their bills to date are just under $1,000 and shall continue to mount and I will post re: the female tomorrow. Sean has named her BHRR’s Sable.

We also wish to thank everyone for their words of support that has been given to us during this difficult time as I tragically lost one of my sisters, Barbara on Friday June 7th. Your kindness means a lot to our hearts/home. 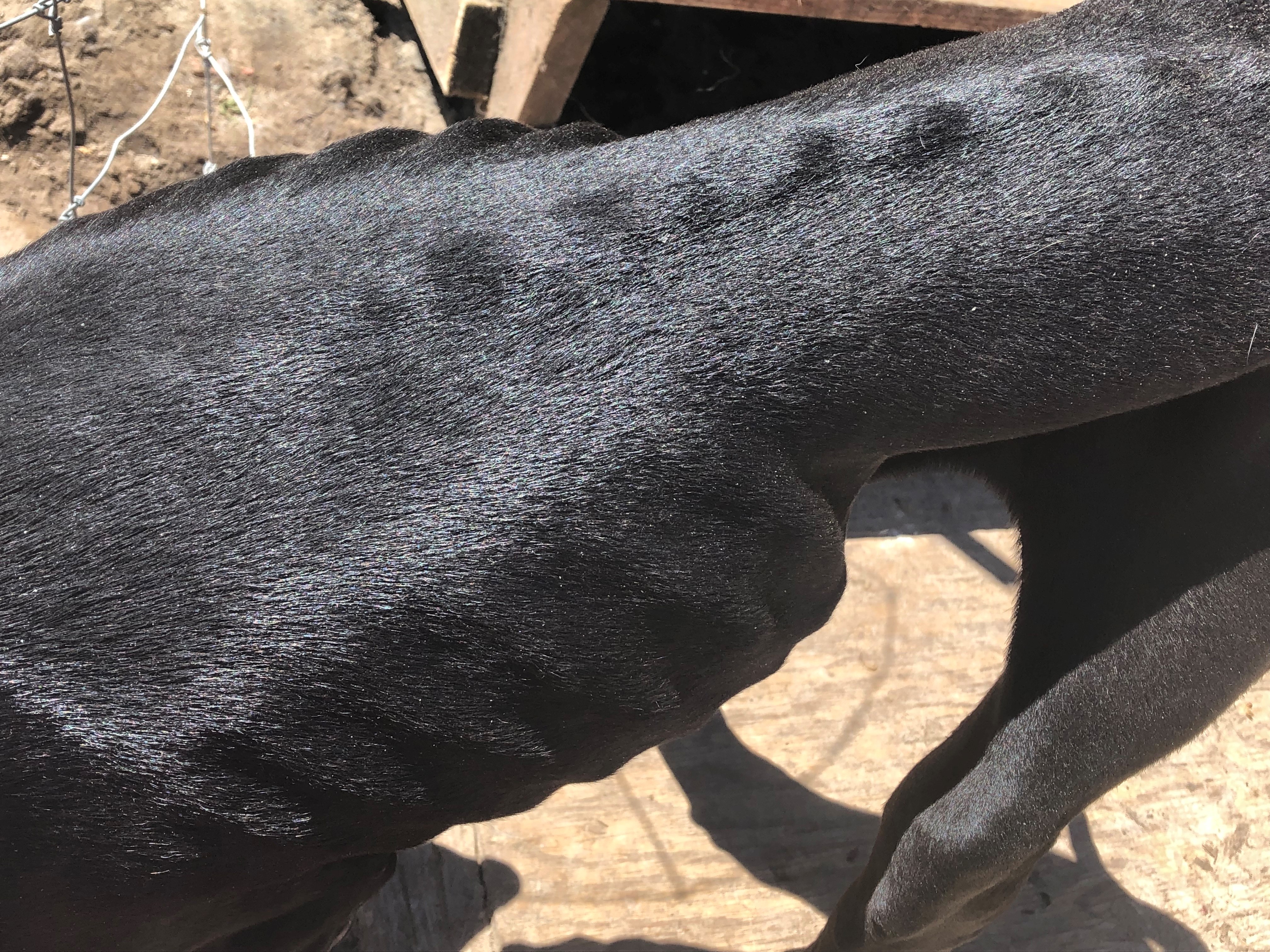