On August 15th, an email came out with an Urgent Request for assistance for a Weim. I had emailed back and we then learned that the O. had dumped this poor by at a pound even though they knew others were trying to find a r/q Rescue placement.

Then after we stepped up, a breed rescue offered to take him and we stepped down and then learned shortly afterwards that they decided not to assist him. They did not even want to assess him.

We were asked to step back up as we knew he needed us and urgently. Without hesitation, we stepped back up. We assess our dogs upon arrival to BHRR. Assessing/evaluating in shelter/pound environments can often be misleading and dogs can and do fail many a SAFER or other Temperament Test.

So, an honorary Giant he shall be! As a highly focused, educated, knowledgeable plus experienced Special Needs Rescue, he represents the dogs we work so hard to step up to help.

He was pulled from this pound and placed in another safe spot and then as of August 26th, he will be moved to a boarding place closer to our location and on August 29th, I will make the drive to pick him up to bring back to BHRR.

Here is a copy of that information sent out:

* URGENT. IN IMMEDIATE NEED OF RESCUE *

Owner is considering euthanasia this week. The information below is according to the owner.

Owner surrender, not at pound
Weimaraner
roughly 8 years
hip dysplasia, severe separation anxiety
roughly 70 lbs
tartar level: 2/10
housebroken, but has accidents on occasion
listens well to commands
good with physical manipulations except hip
friendly, affectionate, energetic
used to live with another dog according to current owner (who adopted this Weim roughly a year ago)
unknown with cats
lives with 2 children (ages unknown)
no aggression, no bite history known to current owner
does not jump
no food or toy protection
has never hurt another animal
pulls a little on leash
good in car
energy level 5/10 but restrained because of hip problems
needs company and walks instead of running
unknown if on medication for hip issue
severe anxiety
excessive hair loss
drooling when female occupant leaves the house 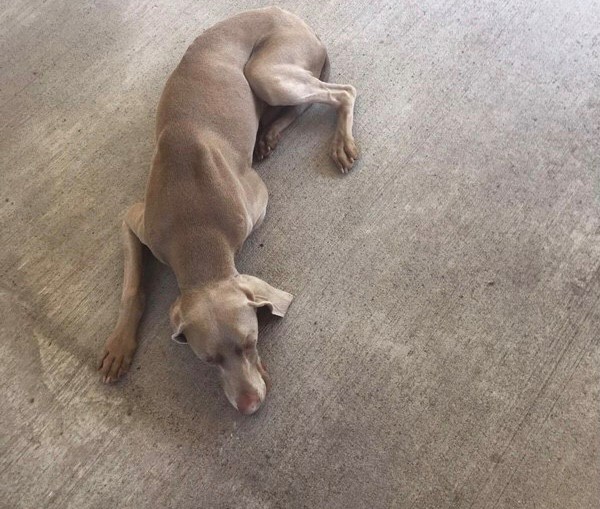