I was almost home from work plus errands and, on the laneway when Sean called. He said something was not right with BHRR’s Angel Noelle. I asked what happened and, Sean said he did not know. He said all the dogs were laying enjoying the sun on the brick deck and, in the yard and, when they heard the car engine, they all jumped up…..all but one……BHRR’s Angel Noelle.

He said she was shaking and, panting and, urinating nonstop.
I hung up and drove those last 25-30 m’s down the laneway as if I was off roading.

When she saw me, she almost tried to roll her way to me and, was urinating and, in clear discomfort. She could not stand. She tried but she could not. I quickly checked her over and no obvious breaks, bites, wounds, overt signs of any kind to tell me what was wrong.

I asked Sean to wrap her up, and, I called work asking if there was an emerge slot and, I keep saying this over and over in the past 11 plus years, I work truly with some of the best of the best. I was encouraged to come right in and, I made the drive in a time maybe faster than I should have yet, felt like an eternity.

To give her more space, Sean had laid her on the back seat and, it was odd not seeing her in her usual shotgun spot beside. I checked on her many times on my way in and, though in pain and not able to move her lower body, she would wag her tail, and pee.
She would lick my fingers and, I assured her calmly and softly several times over that she was heading into a great place that would do all they could to help her.

As soon as I arrived to KAH, I was ushered to the back and, things out in motion. She was so stressed, the Diarrhea then started. All involved in her case were so kind, compassionate and, caring. They think she is a special tripod also.

No clear breaks found by her Vet – and, thank you to him and to the clients in the exam room that understood – he did not feel her cruciates were affected and, her back felt aligned well. No major pain response given. She still could not stand yet, tried so hard.

At one point, she was wobbly bobbly on her feet yet, keeling over on her left side.

Sedation and x-days done – no trauma, breaks, hips were not dislocated, cruciates look good and, were examined again. No disc disease etc….

No temperature, heart was good and, her Vet feels that somehow she developed a soft tissue injury – we all hope – and, she had the hydro when she was there for sedation and will have Deramaxx starting tonight plus metro for the diarrhea. She had had a normal stool that AM.

She was soaked in urine and, per her Vet, he felt perhaps bruising occurred that affected her urethera sphincter.

If she does not improve by tomorrow, we are back in.  There is no obvious reason as to why she is not walking.

For anyone wishing to contribute to her mounting vet bills, as always, we do appreciate any consideration, and, this wee angel is worth every dime, nickel plus, may we ask people to contact Kanata Animal Hospital directly? 613-836-2848

Her file is under her name ‘Angel Noelle’ with Birch Haven Rescue and Rehabilitation Services.

Most importantly, please keep this amazing miracle dog in your best wishes…..it is going to be a long night….she always sleeps in a crate beside me and, tonight, she sleeps with me.

*Feeling good on Hydromorphone sedation medication and, then, they really set in and, down she went…..* 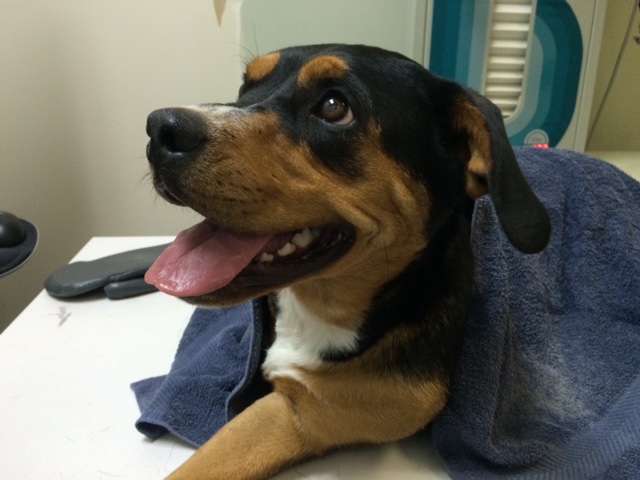 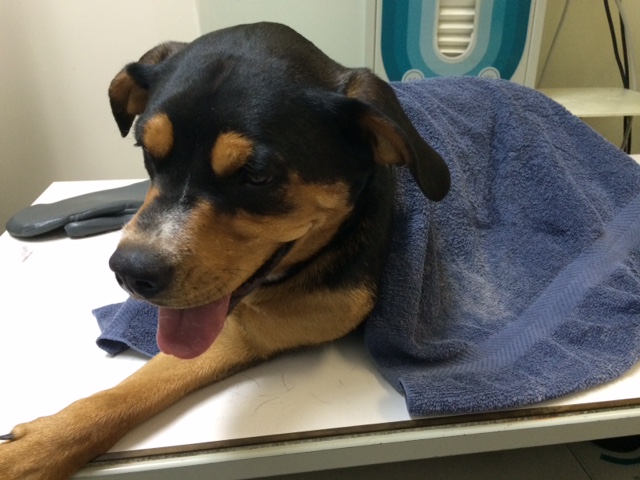