Someone says stay tuned! He has an extremely special and exciting thing to announce later today!!
Right now, he is catching up on some zzzzzzz’s after a busy day of hanging at KAH!!
He has his ‘shotgun’ seat, heat on and, asleep before I left the parking lot!!
The Lord Stafford!

His new weight was higher than I want, so, talking to some kids tonight re: his treat intake as, he needs to be monitored so closely. 21.5 Kgs(47.3 pounds). He should be no more than 20.5 kgs.
He is still recovering from his exposure at his his play date to carpet. He is back on eye medication plus, fuciderm for between his toes. We did another KT ear treatment on that left ear of his. Any future approved adopted home is going to have to understand that skin, eye and ear issues are part and parcel of the territory of owning a bulldog.
None of these things are anything that would take him away from being placed up for adoption shortly. He is always going to battle skin, ear and eye issues. 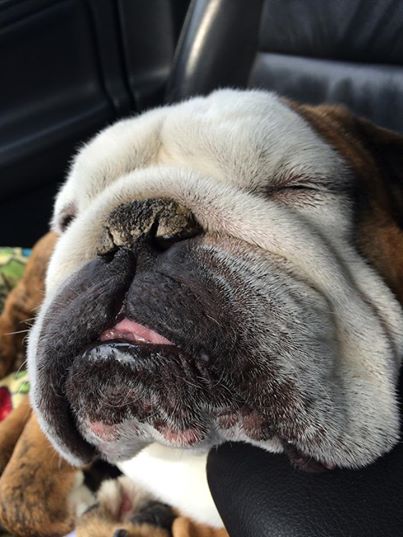