Someone decided to go into BHRR's Gretta's colossal crate to help play 'nursemaid' and, I guess fell asleep in the process! wink emoticon
January 30th, 2015
BHRR's Gretta had a good day…she is still barely putting those toes down and, we are working with her to encourage her to toe touch(she wants to keep that leg tucked up close to her belly….not good) and, do a small amount of weight bearing to start….we are massaging and, icing. The incision looks good and, the swelling is to be expected plus the bruising. I am monitoring closely……….
She is eating well, had a small accident pee in her crate(totally fine as she is slightly doped up!) and, then had her first poop outside with another large pee tonight.
She is drinking well and, wants to stay close to Sean…she and her sister FREEDOM DANE BHRR's Peanut(adopted September 13th, 2012 ) were always so attached to Sean. smile emoticon His book-ends he called them!
She is taking all of her medications like a pro – I added Tramadol to her pain regime today to help make her more comfortable.
We have a small area blocked off in the kitchen and, she has limited/restricted room to move around some on her own under our supervision(my computer is right there) and, also has access to her crate.
Skor(now a miracle 12 weeks herself!) who eats her own 6 smaller meals a day, in the kitchen, had her supper and, then decided that a snooze was in order next to BHRR's Gretta. She gets tired fairly quickly and, nothing like a nice caring and warm fellow Dane to lay up against!
Gretta was snoozing also yet, camera's can still make her uncomfortable, and, she lifted her head up….
Still a lovely photo……. smile emoticon
Two very special needs girls' that are truly very special to many of us! smile emoticon 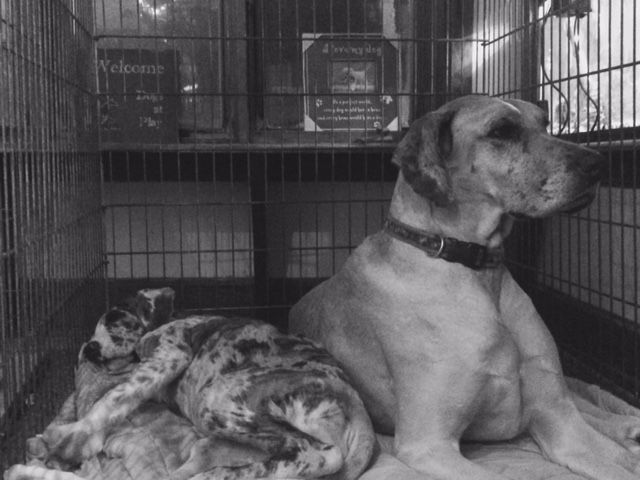