Someone says 'I'z sleepies'……zzzzzzzzz….
BHRR's Porridge(Miracle DOG supreme!) was with me at work today for a recheck.
His weight was down to 70.5 KGS(155.10 pounds) – we weighed him twice and, he was rock solid on the scale – from the 172.04 pounds that he was at his last check up(he goes in every three months or so) and, as he was one of the rescues that became sick from eating some dog food that came our way last week from another group, we are running blood-work and, a UA. THAT is a big weight loss.
I am also doing his yearly HWT as we were already sucking blood form him.
He had a manicure, pedicure and, though, his ears are squeaky clean, I touched them up….. smile emoticon
Always a huge hit at KAH!
This boy was not expected to live to see 18 months of age yet, he showed that MegaE would not get the upper hand AND, that seizures were not going to take him over AND, when he became quite sick last March, we were advised that he many only live a matter of weeks yet, he has more than fought the great battle with the then finally diagnosed Inflammatory Nasal Disease and, his 50 mg of Pred SID is working wonders….
He will be celebrating his 7th Birthday at the end of March!!! You keep it up buddy!!! smile emoticon
He looks forward to seeing many of his fans soon at our upcoming BHRR "EXPERIENCE' Mini Open House! 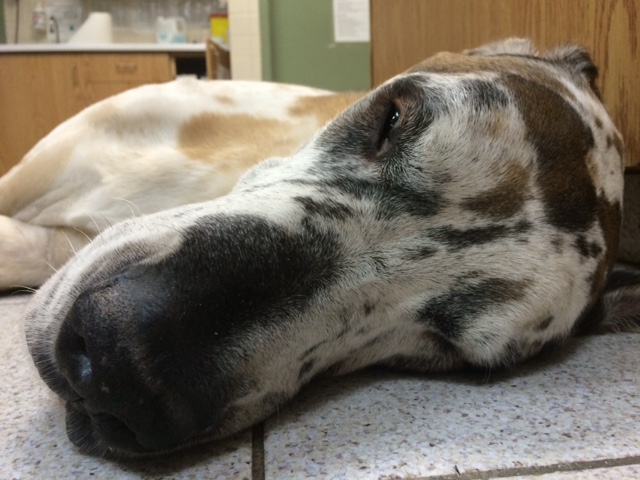