BHRR’s Koop had a GREAT night! If I left the sunroom or came into the sunroom, he would become a bit upset and bark yet once I was settled, either in or out of the sunroom; he became quiet. I went to bed around 3:30 AM or so and he slept well and did not even bark when Sean was up a couple of hours later to go to work. He is passively ignored when he barks and I have now introduced him to the 1+ acre of fenced in yard and he is busy exploring that. He was a bit worried when I left for the few moments it took to put my kids on the bus this AM and was happy to see me when I got back. He has now been successfully integrated with BHRR’s Albert, BHRR’s Ava Marie, BHRR’s Potter and Guinness. Albert made him a wee bit nervous as Albert was very excited to see a new friend and I was so proud of Albert for he has not tried to hump a dog in ages and ages!!!! YAY! Yet no one is more excited to meet new dogs than BHRR’s Potter!!!! His whole body just quivers as he meets new play buddies! BHRR’s Potter is now outside showing BHRR’s Koop the ‘ropes’ so to speak and later on today, I will work on integrating him with others. Once he comes back into the house, I will let him rest for a bit and feed him breakfast. I fasted him last night. He is not fond on going into the 45″ collosal crate yet it is getting better. I have added three new pictures to his slideshow(man, once he starts to move, I cannot get a good shot! LOL) #6 – #8 and have put one below of him and BHRR’s Potter, greeting each other this morning! 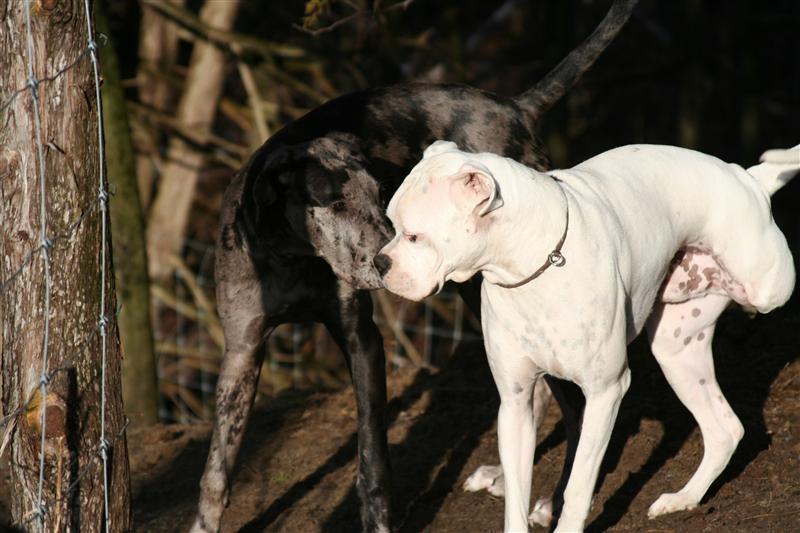