Here is an article that I have put together on bloat and tort.

I am always trying to stay ‘current’ on the latest beliefs on what does or does not cause Bloat and as always, research, experience plus education has been key in forming my own beliefs. Everything stated below is not necessarily a total/complete reflection of all of my own personal plus professional beliefs on the topic, just some of the information that can be found.

One of the lessons that I try to pass along is to not just look for ‘physical’ signs/symptoms of bloat/torting; look for behavoural changes. There was very little in regards to physical changes with BHRR’s Porridge and the same could be said for our RIP beloved BLK’s Maggi plus BHRR’s Dana. “KNOW YOUR DOG” and know when he/she is not acting right!

Personally, I will say that I am not a fan of the Purdue study out there(Neither is Linda Arndt) and in working with Giant Breeds; we are often asked how many bloats/torsions we have had.

In 24+ years of operating BHRR and in almost 30 years of owning Giant Breeds; we know of 15 Giants that have bloated/torted – between our own, those that were adopted and bloated/torted in their adoptive home or in a foster/perma-foster home.

My professional opinion in having owned/worked with Giants for almost 30 years; is that the following are top causes of bloat/tort:

1) Stress of which excitement is a form of stress
2) Temperament – Highly emotional, reactive and nervous dogs
3) Hereditary Factors
4) Breed tendency – Great Danes, Dobermans for example
5) Exercise too soon before or after eating
6) Once a dog has bloated, their chances are greatly increased that they shall bloat again

In these 24+ years of operating BHRR and in the almost 30 years of owning Giant Breeds; we know of 15 Giants that have bloated/torted within the following parameters:

They were all Great Danes.

Additionally, here is one blog ‘experience’ post made under the Gwennie Novel Blog about BHRR’s Porridge on February 22nd, 2011. BHRR’s Porridge had his second bloat incident in May of 2015.

Details: 12 were Rescues and 3 were from highly reputable/quality Breeders.
10 of the Great Danes were in our own home at the time of the bloat/tort and two bloated within one week of each other(Maggi & Dragon).

Survival:
Two Males & five Females survived(male 3.5 years & male 10+ years) ; female – almost 9 & female – almost 6, female 7; female 4.5 years of age & female just over 3)
one Male/one Female (both just shy of 9 did not) as BHRR’s McGee( had DCM) plus he & BLK’s Maggi(July 2009) had some of the worst cases of tort that many Vets had ever seen.
The other male(just shy of 8); Grayson Danes Dragon(July 2009) did not make it due to a very poor vascular system.
The one female, BHRR’s Storm(December 2010) just over 2 years also did not make it
The one female, BHRR’s Dana(December 2012) 4.5+ years did not make it – complications – 40% stomach had gone necrotic
The one male, BHRR’s Canvas(December 2014), just over 3 years did not make it – torted so fast
The the other two males BHRR’s Sambuca and my Big Blue Bronson, both 10+ years of age did not survive. The Bloat damaged Big Blue’s heart.
The one male, BHRR’s Merlin(January 2015), food bloated on contaminated food donated by another group – being emaciated/with other medical conditions, he did not make it.

In addition to breed predilection, there appears to be a genetic link to this disease. The incidence is closely correlated to the depth and width of the dog’s chest. The greater the chest depth/width ratio, the greater the risk of bloat. Several different genes from the parents determine these traits. If both parents have particularly deep chests, then it is highly likely that their offspring will also have the same chests and the resulting problems that may go with it. A recommendation was made that stated that no dog should be bred if there is a 1 to the 0 degree relative that has previously bloated.

Linda Arndt from the late GREATDANELADY.COM states that ‘When we limit our gene pool to specific kennel names, bloodlines, color families as well as remaining within each specific breed, this prevents us from maintaining hybrid vigor. It maximizes our chances for doubling on negative traits with the increased potential for animals that are more sensitive to stimulus (light, sound, movement) and affect the total physiological system (body functions) and their psychological system (mental/behavioral functions).’

Dogs over 7 years of age are more than twice as likely to develop gastric dilatation and volvulus as those who are 2-4 years of age.
Personal Note – *7 that we are aware of were over the age of 7 – 46.6%*

Male dogs are twice as likely to develop gastric dilatation and volvulus as females. Neutering does not appear to have an effect on the risk of GDV.
Personal Note – *We are aware of more females than males – 53.3%*

Owners and Vets originally blamed cereal-based diets, yet that is still being questioned. Recent studies indicate aerophagia (air swallowing), as often happens during periods of the above activities, appears to be a cause, rather than, as previously thought, gas caused by fermentation of dog foods. Also, increased particle size of food was associated with a significantly decreased risk of GDV in Great Danes and pre-soaking of food actually destroys nutrients plus causes fermentation.

There is also a possible link between bloat and calcium supplementation that causes persistent hyper gastrinemina.

The debate still carries on about raised feeders and does it or does it not reduce/increase the incident of bloat.
Personal Note – *I* feed raised and and never had a bloat/tort and our first bloat was after 23 years of owning Giants and after 14.5 years of operating BHRR.

Dogs that tend to be more nervous, anxious, or fearful appear to be at an increased risk of developing GDV. Per Linda Arndt in respect to stress ‘Sometimes stress is external and obvious and other times it is internal and goes unnoticed…..Some people and some dogs, due to genetics, body chemistry, nutrition and personality, seem to handle negative stress better than others.’

There is not one particular activity that leads to the development of Bloat/GDV. It appears that it occurs as a combination of events. Studies of the stomach gas that occurs in dilatation have shown that it is similar to the composition of normal room air suggesting that the dilatation occurs as a result of swallowing air. All dogs, and people for that matter, swallow air, but normally we eructate (burp) and release this air and it is not a problem. For some reason that scientists have not yet determined, these dogs that develop bloat do not release this swallowed gas. There is currently several studies looking into what happens physiologically in these dogs that develop GDV.

Other potential causes: surgical complications, history of belching, history of flatus, aggression toward people or other dogs, eating too fast, unrestricted activity following meals and large amounts of water consumption.

“Happy/easy going” dogs were found to be less prone to bloat.

Once a dog has bloated, there is a good chance that he/she will bloat again.

Other helpful suggestions to help decrease the chances of Bloat:

*Never feed your dog immediately before or after heavy work out or training session.
*Be sure that you are not restricting proper water intake
*Do not allow your dog to become overweight.
*Be canine-connected and watch for odd symptoms, abdominal swelling, dry vomiting, strange gagging, drooling, pale gums, painful to palpate, extreme restlessness, excessive stretching etc.
*If you have a nervous dog, feed her/him in a quite relaxed atmosphere.
*If you plan on changing your dogs diet, start slowly. Sudden diet changes will cause gastric problems.
*Feed on a consistent routine schedule
*Gastropexy – Dr. Glickman of 1934 dogs studied – reported that the recurrence of bloat decreased from 4% to 0.3% per month & lifetime recurrence rate of 80% dropped to 3-5% with Gastropexy.

The Genetics of Bloat – Researchers hope their work will help predict which dogs may get the deadly disease. Article published November 2014.

As the stomach swells, it may rotate 90° to 360°, twisting between its fixed attachments at the esophagus (food tube) and at the duodenum (the upper intestine).  The twisting stomach traps air, food, and water in the stomach.  The bloated stomach obstructs veins in the abdomen, leading to low blood pressure, shock, and damage to internal organs.  The combined effect can quickly kill a dog. 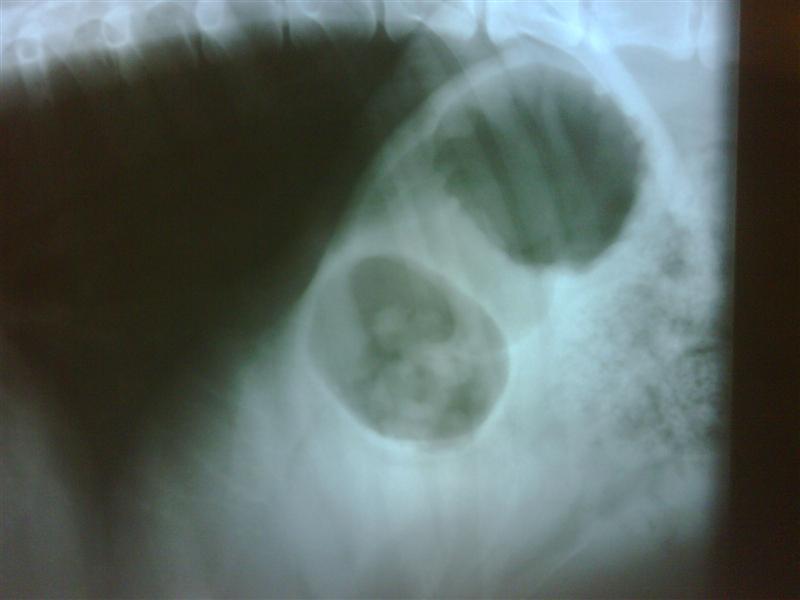 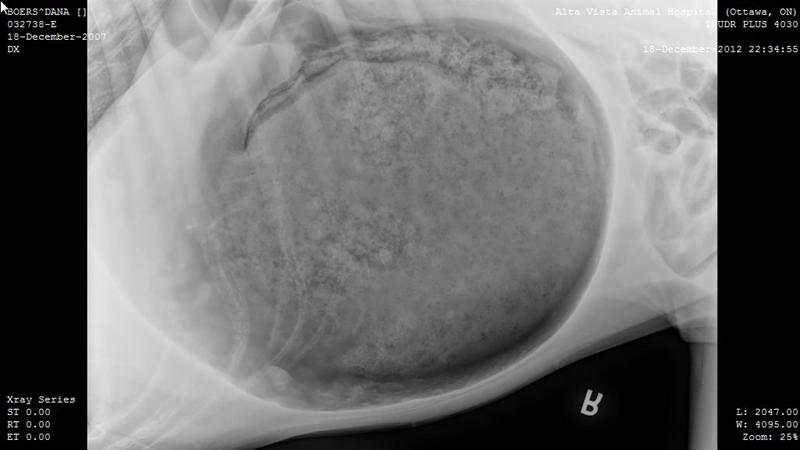 Other Bloat Articles that I have bookmarked

A gastropexy will not prevent your dog from bloating but it will decrease the probability of bloat by allowing your dog to burp and pass excess gas through the stomach to the rest of the intestinal tract. But a gastropexy, if done correctly, will prevent the stomach from turning on its axis, resulting in a critical, life threatening situation. Bloat itself can kill your dog but not as quickly as GDV will kill him. If the stomach cannot rotate, the time your dog has gained, even during the bloat episode, may be enough to save his life.

Also, though rare, with repeat dilation, the pexy site can be broken down and lead to torsion in the future.

belt-loop gastropexy
a modification of the circumcostal technique in which the seromuscular gastric flap is passed around a loop of transverse abdominal muscle instead of a rib.Fast, simple, strong. Decreased risk of stomach leakage. Stomach fixed to Right abdominal wall. Requires more skill than incisional pexy. Belt loop gastropexy has a much lower recurrence rate of torsion than tube gastrotomy as well as a much stronger adhesion than either tube gastrotomy or incisional.

tube gastropexy
a method using a Foley catheter placed in the pyloric antrum and through the abdominal wall in the right paracostal area during the postsurgical period. Not as strong and, the tube must remain in the stomach of the dog for at least one week.

ventral gastropexy
fast. Decreased risk of stomach leakage. Adhesions may impair future surgery if ever needed. Difficult due to depth of the BH abdomen.

The one trend that I have begun to also see through my years working in animal medicine and in Rescue; is that there are more and more cases of younger dogs bloating.

*The Great Dane was the #1 Breed at risk for Bloat; the Saint Bernard was the #2 Breed and the Weimaraner was the #3 breed. 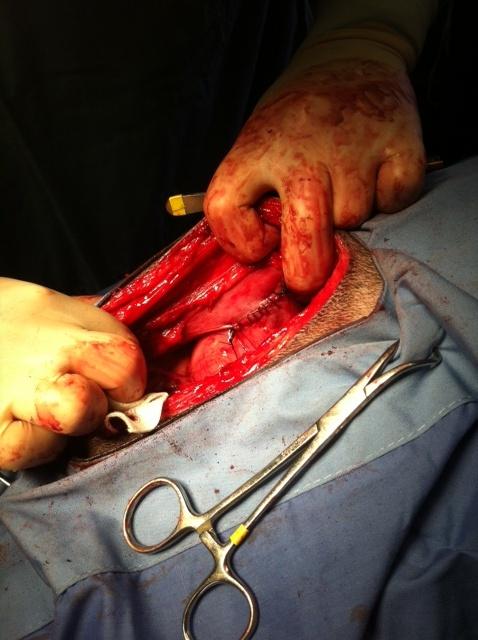 QUICK ‘CHEAT’ CHART – NOTE: NOT ALL DOGS ARE “CLASSIC” IN PRESENTATION – KNOW YOUR DOG! 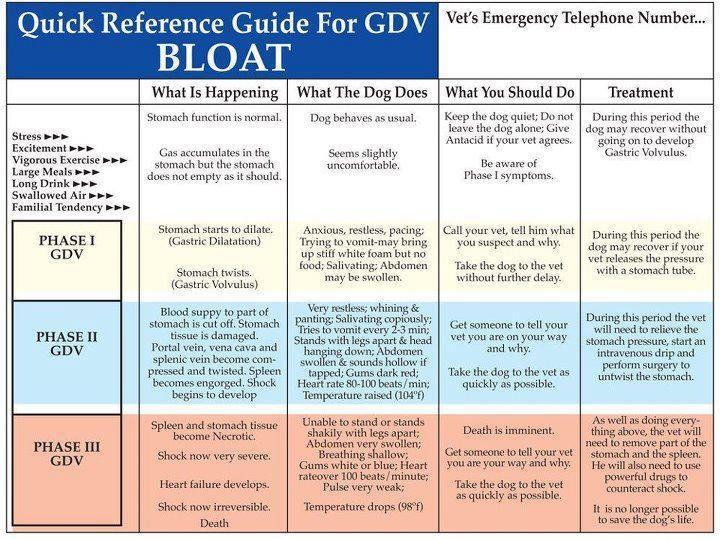