Here is a VIDEO of BHRR's Bloom as we got ready to head to KAH for her splint removal and re-visit. 🙂

She was a really good passenger, did not help me drive once this time and only rarely decided to voice her opinion of the occasional peson we drove by RIGHT into my ear! She is so social that she is not impressed that she is not being greeted by all!

She weighed 36.1 KGs today ( 79.42 pounds), so slowly getting there. Once she has that opportunity to get the muscle tone and mass on her; she should be around 90 pounds or so. People kept asking at KAH, what is she mixed with and if she will get any bigger and the answer is; she is 100% pure backyard bred dog and nope, she is not going to get much taller. She is that 'teacup' 'Giant' in that wee package of 'dynamite.' We nicknamed her 'Boom Boom', just as dynamite would explode, so can she with the biggest personality!

I wish I had my camera out as she layed sprawled in one of the KAH staff members laps! My dogs just WUVS her!

This poor thing has had to be on enforced crate rest for 6 weeks and has another 2 to go at the minimum(we see Dr. Gatineau on February 8th for more X-rays and another follow-up) and she has been a trooper but that is a lot to ask of anyone, let alone; a young dog. She makes up for lost time when she can be out and it took three people to hold that wiggly body still for the Vet to take off the splint and examine her.

People need to understand that she is not mean, she is full of young puppy energy that has been asked to be contained and to think how frustrated she could actually be and is not; is amazing! Yes, she is a high maintenance dog yet she is also an awesome dog and is going to make a home an awesome addition!

BUT, she is not for the faint of heart, small 'teacup' body or not. She is brilliant and a thinker and so busy!

That will change as her obedience can be more focused on(she was already better for me in the car and in trying to 'walk' with her! LOL) and it will only get better and better. AND she will improve as she matures and also gets proper exercise.

I took some photos of her leg. As the splint was being unwrapped, we could begin to smell what was underneathe. Yes, her toes are a bit swollen and in-between them is very raw – from her licking and the rubbing. The actual surgical incisions look really good and she is healing well but that one area from when she had her cast cut into her leg and though it was healing from the cast; the splint really aggravated it when it was covered by the splint. It is raw and oozing and you can tell that she has managed to snake that tongue of hers down the splint to lick it for it has that lovely raised edge look indicative of lovely doggie salivia! 😉

So, she was all cleaned up and I have hibitane cream for her, 1,000 mg of Cephalexin to give BID for 7 days and I left with an empty IV bag for her foot plus a cone. BY the time, I reached the car, the IV bag was off the foot and the cone had been busted…YUP! That is my dynamite girl for you! Sigh…………….

So, the challenge is going to try and keep it dry and from her licking it. We put YUK all around the IV bag and gauze to no avail but I now have the taste of it in my own mouth,..YUK is right!

The Vet had talked about possibly re-splinting it yet with the open sores/areas, it is best to keep it aired and within a couple of days, should look much better…AS long as we can keep her behaving! 😉 The Vet felt the leg was healing well and you could feel the pins through her skin. We just need to get on top of the cast/splint complications. I was a bit concerned and with just cause as we took that splint off and now we can be proactive about treating her!

She continues to keep me challenged and on my toes and I LOVE dogs like her. She is honest and open and very clear about what she feels at all times. I could not ask for a dog to communicate better with me. 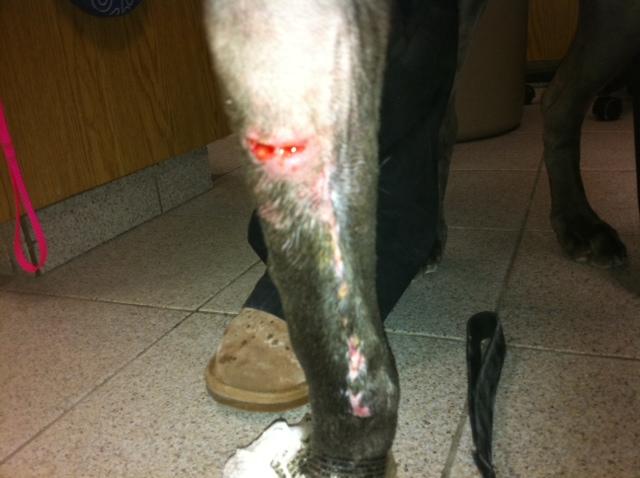 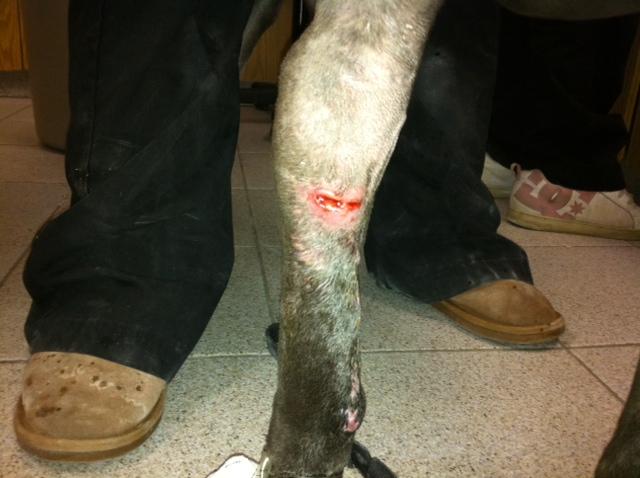