BHRR's Atlas had a good night.

He is understandably 'worried' about the other dogs and most specifically BHRR's Veteran. For a dog that has been so neglected, he does not eat his food as fast I had thought he might and there has been no need to put a large stone or object in his bowl to get him to slow down. That is good as in his poor shape, bloat is a concern. The Saint Bernard was #2 behind the Great Dane for bloat statistics.

It also gives me great hope that the minor growling his does over his food or when mostly BHRR's Veteran goes by his crate; will dissipate over time as his 'worry' lessens in respect to him not knowing when he shall be fed next.

He and BHRR's Veteran are being fed three times a day and are eating well. As I got my hands on him more today(yes, out of bed…shhhhhhhhhhhh do not tell Sean..wait, he was here!) I could see in the daylight what I could not see well last night. He hair is virtually non-existent on his inner back legs, belly and lats.

He has scars and healing lacerations over a fair amount of his body and what does worry me a bit is his swollen lymph nodes that I can feel on his neck. Will get that checked out.

He is very submissive to humans and will lower plus turn his head away from me when I pet him. He will wag his tail slightly when he feels a gentle touch and he looks so hopefully and wags his tail a bit more when he sees bowls. It is really sad that he might think that bowls of food/water are not for him. 🙁

His hair is so dry, coarse and dull. That will change! He is now getting yogurt plus raw eggs/shells in his food.

He is in sore need of a nail trim and a bath and we will get there.

I have started giving him some Deramaxx for the swelling in his neuter site plus for his hips. He is laying on a pile of blankets right now and thanks to a special angel a Kuranda bed is headed his way!!!

When he was doing a walk about in the fenced in yard; he came across a basketball that some of the dogs play with and he had NO idea what it was and it made him a bit nervous. HOW tragic is that. 🙁 All toys have since been picked up outside and remain on the deck so that he does not feel so nervous doing a walk about. AT least he is comfortable to actually walk the fenced in area and he will come into the house when he is ready. We do not have to go and fetch him. When he is ready, he comes in; allows me to give him a soft pet on his head and very gently on his side and he goes into his crate to rest.

He has had 4 walk abouts on Monday and he was exhausted. So little strength.

His mental health is a deep concern for me. I sit and keep him company as I am not exactly mobile myself and I talk and sometimes he will shift his head and look at me briefly and sigh and half close his eyes. When I get up to leave, his eyes will often become wide and then he will turn his back and put his head into his side into a ball. 🙁 BHRR's Veteran does the same thing. 🙁

I cannot wait to be able to get back on my main computer FOR his crate, BHRR's Riley's crate and BHRR's Veteran's crate are in the sunroom and I keep them company and they, I and we 'chat'.

It has only been just over 24 hours…baby steps…or rather, infant steps. I am not GIVING up on him and am trying to find and give him the thing or things that shall get him to want to try and fight to live. Food and water are the first great items. Companionship, calm and stable environment, a safe place to eat and sleep and just the right amount of love that he can stand right now, consistency, patience and I hope he will give me the time that is needed to show him that people care and that people really really really care about him and his happiness, that HE matters and IS important.

Just want him to 'stay' with us….mentally and emotionally; well; actually; I want HIM to be there mentally and emotionally. I know 'he' is in there…I know he is. After almost 25 years of working, owning and rescuing animals, possessing a Master's degree, working on my PHd etc, BHRR's Atlas is up there as being one of the most 'special'.

Two pictures below  from his first AM at BHRR. WELCOME to BHRR my dear man!

PLEASE CONSIDER DONATING:
Monetary donations to do bloodwork including a heartworm test, to purchase flea/parasitic/hw preventative meds, X-rays of his hind end, antibiotics & food
*One can donate by PayPal or email transfer to gwen@birchhaven.org or by mailing a bank draft to to 'Birch Haven Rescue & Rehabilitation Services(BHRR) and mailed to: 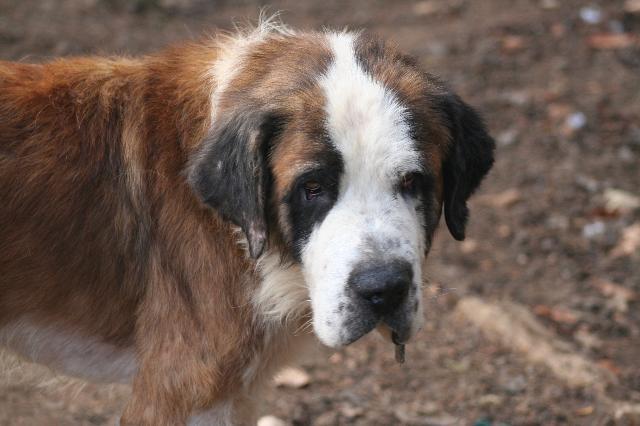 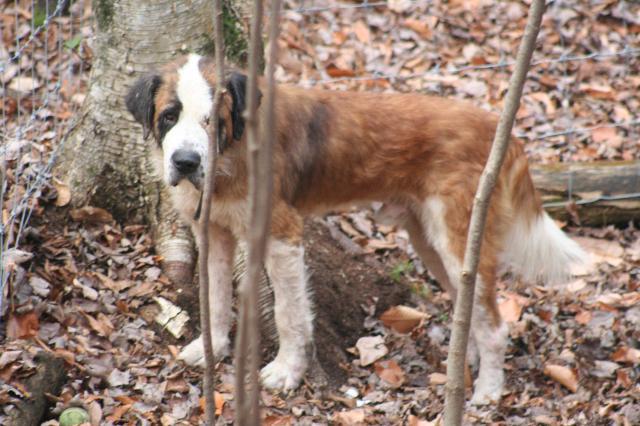 Note: BHRR's Atlas was being known as 'Bernie' during his short time under the expert care of ARC. We changed his name as he is very much carrying the dead weight of the world (of his neglected past) and also survival on his back/shoulders. Every day, he moves forward to a 'new' lighter and happier world/life and it is one that is not heavy upon his shoulders/back yet one that carries him when he needs it and supports him when he needs it and one that is filling his heart plus soul with happiness and health. A 'world' that will lift him up and hold him tight with nuturing love plus care.