BHRR's Riley arrived to BHRR on November 2nd and we were told that he had been given his Rabies at the shelter. Unfortunately, his paperwork did not come with him and we did ask twice to have it faxed over. At this time, we are unaware of what else he received at the shelter yet we shall not be given him any more vaccines or altering him until he is at a much better weight.

He has been given sentinel and has begun a routine deworming protocol that all the dogs that come to BHRR go through with Safeguard or aka Panacur for many.

This boy is at least 25 pounds underweight and I estimate him to be about 15 months of age.

How to sum up his personality, well………..he is a lot like BHRR's Parker Paws and BHRR's Benjamin yet is is very much uniquely BHRR's Riley at the same time! He is a goofy, stick fetching/carrying, thrilled to be digging and humping all the dogs ball of hormones boy!

There is not one mean bone in this dog's body that I have discovered to date and he has learnt to like his crate. 😉 They all do!

NILIF and Gwennie's Doggie Boot Camp are in full swing! 😉

He is completely housebroken and does not mark in the house. He makes some low whining types of sounds as he is asked to go back into his own crate to learn to love his own company plus to know that his own company is 'ok' in that he does not have to rely on others to comfort and soothe or keep him company. He settles down really well in mere moments.

He is sleeping in a crate at night and we are feeding him up to 5 small meals a day due to his really poor body condition. He has collapsed pasterns and his coat was really dull and flaky upon arrival. Eggs with shells and  some plain white yogurt are serving him very well. He is also getting some wet canned food mixed into his kibble to keep him interested in eating.

He plays a bit rough and has very little manners yet that is because NO one ever spent the time to train him. He will get there.

So much more to update yet after a 15 hour work day, time to get a wee bit of shut eye myself. THANKS for everyone's patience as I recently went through surgery on November 4th and my recovery time over the next 6 weeks minimum shall be time to focus on updating blogs and adding photos. We are still looking into video capabilities to add videos of the dogs to not only our website yet our PetFinder website too. Stay tuned!

We are still plugging away on online adoption and volunteer form options as well plus the ability to view our adoptables on facebook and to download an application. 🙂

Below are two photos to demonstrate JUST how painfully thin this boy really is AND bear in mind that these photos were taken ONE week after his arrival to BHRR. He was much worse upon arrival to BHRR and with other things on our plate; we were unable to get the 'first' photos as we normally try to take of all new arrivals.

Additionally, taking photos of dogs that are dark often do not show up well. This boy is all ribs, hips and spine…. 🙁 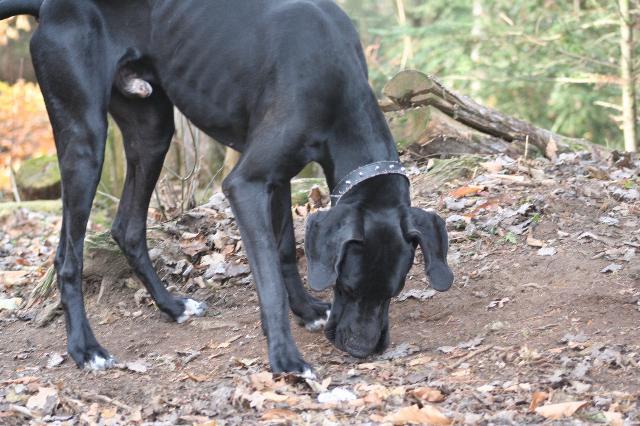 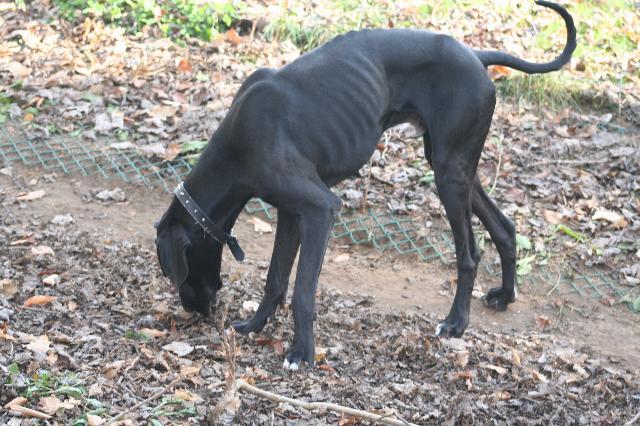