BHRR's HOLDEN could use a Sponsor/Virtual Foster. He will need more vetting and lots of TLC to rehab him. He will need Giant Sized Smoked Dino and Knuckle bones, a dog bed to call his own, a new collar and I look forward to so many people getting to meet him!!! To those that are registered and planning to attend our June BHRR "EXPERIENCE" Mini Open House; you are in for a real TREAT!!!

I have just arrived home from the 3+ hour roundtrip to pick up BHRR's Holden from the last Volunteer to transport him. As soon as I saw him, I just wanted to scoop him up, hug him close and promise him that all was going to be 'Ok'. He was so sad and I had already been sent an email last night from someone in Ohio that said he was very sad. 🙁 The other thing I noted when I first saw him was how GORGEOUS he truly is! OMG! He is going to do his share of heart stealing!!!! His eyes….his colour, that head, his temperament, I am just instantly smitten with him. 🙂

He has not eaten anything from his bowl yet has taken a couple of tiny treats from my hand and was so gentle.

I am pleased to hear that he is in such capable hands. He stole my heart in just hours while he stayed overnight here with us. He is a grand dog and if you wouldn't mind and can find time I would love to hear how he progresses. Thank you so much for your work.

In going over his paperwork , he was given a body condition score of 3/4 out of 9!!!! 🙁 His hair/coat hide much regarding how scary thin he actually is. 🙁 I have an appointment set up for Tuesday to have one of my own Vets also check him over. The paperwork that also came with him shows that he had a HWT on May 4th and it was negative. Rabies was given on May 5th, 2011 and he was given DHPPV on May 4th, 2011. I will give him a booster in June.

The Grant Country Veterinary Clinic indicated that his eyes, ears, circulatory plus respiratory systems are normal. Also checked off as being normal during his thorough exam on May 18th; were his abdomen, gastrointestinal system, urogenital system, lymph nodes, musculo-skeletal system, skin and nervous system were all also normal.

I shall be bringing in a fecal sample on Tuesday for testing. I have given him a Sentinel and have placed a bowl with some yummy food and Panacur in his crate. He went into the crate no problem, layed down for about 5 minutes and then wanted out and had a nice pee. I have been told that he is almost housebroken and I was delighted that he let me know he had to go! 🙂 Sean says that he reminds him of our own 12+ year old Newfx Kona and I can well believe now that he is a Newf/Pyr X. He needs to put on about 20-25 pounds of muscle and mass and that will bring him to over 100 pounds. He weight on May 18th was 79.8 pounds.

The most common word used to describe BHRR's Holden during his transport is 'sweet', the exact same word we have been told since he was first rescued.

Feedback from another wonderfully kind Volunteer on BHRR's Holden:

"I found Holden to be a very young dog, with an older dog`s eyes.  He has seen a lot, and I don`t think the world has been very kind to him. He has a quiet maturity about him, and he seems very wise. He is trusting and loving and very quiet. He stood with his head and skinny little shoulders between my knees while I hugged him. He stood like that for nearly 5 minutes straight. I had given him a drink of water. He had had enough of all the car swapping.  He jumped back into my van onto a comforter he quite enjoyed and didn`t want to get out. It was all I could do not to bring him home with me. THANK YOU for taking this affectionate and very, very special dog into your care. He is definitely òne of the extra special ones`.

Below are two photos that I took of him when he first arrived and went into his crate. He still smells a bit ‘skunky’ yet in time that coat of his will become less coarse and so healthy looking. 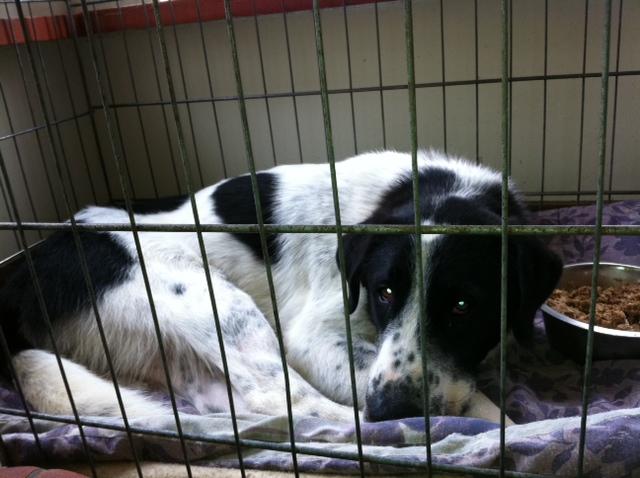 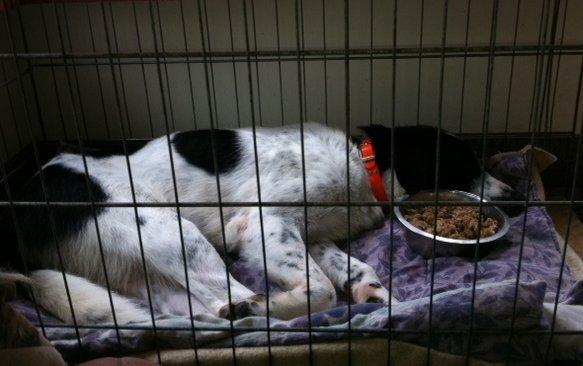