Today, he had his annual at LAH.

He had a great drive in. With being so worried about so many things, to set him up for success, I did give him Trazodone last night and then again today. There truly is no need to watch an animal struggle and stress when we have the means to lessen their emotional load.

Sean came with me and we did an errand prior to arriving at LAH – Sean stayed in the car with him and the errand went much faster than expected, so we ended up almost 1 hour early for our apt.

So, we just relaxed in the vehicle and people came and went and animals came in and out and only twice did he become reactive.

Remember that a reactive dogs is not trying to give us a hard time. They are trying to tell that they are having a hard time. AND we should be listening and helping them.

I told him that he was ok and then passively ignored and he barked about 3-4 times and then quieted down. No lunging or growling. Once he quieted down, he was told that he was a good boy, I thanked him for being such a good boy and rewarded him with a Benny Bully treat.

This one car stopped and parked close beside us and that man was quite intimidating to him. Well, the man forgot something and after leaving his vehicle, got to the side walk, turned around and came back. Mr. Caramel just looked at him, ears focused and body a bit tense, yet, not a peep when he came back to his car and left again.

I was so proud of BHRR’s Caramel and told him how proud I was and he was given a teat. His tail wagged so much, he was so happy!

From then, he just laid down and we waited for our apt.

About 15 minutes prior to his apt., I went in, prepared his vaccines and got a muzzle – muzzles are not punishment. For dogs with impulse control issues and being worried about a lot of things; this can be a great safety and not just a training tool.

We have muzzled trained Mr. Caramel and he took the treats, put his face into the muzzle on his own volition and his wonderful Vet did the apt. in the parking lot. So much less stress and strain for BHRR’s Caramel.

He never once growled or panicked – did step away when it came to his ears being looked at yet, that is around his face and he settled down well. No issue with his eyes being looked at. His Vet let him check out the stethoscope and his heart and lungs were given a big thumbs up!

The Vet was able to do a very thorough exam – other than teeth(wearing a muzzle) – yet, we do check his teeth regularly at home and we did not have any concerns.

He was great with all of his vaccines – 4 pokes – and his body condition was perfect. We did not do a weight – that meant bringing him into the Clinic where there were animals leaving from their surgeries today and was quite the busy place.

While I would have loved to know what he weighed as he looks marvelous! – his comfort zone is the priority.

He just thinks that others are out to eat him and I did tell his Vet the story about BHRR’s Lilly and how she made it clear that they were going to be bff’s and they are! She did not give him a choice!

He has BHRR’s Fred, my two Wolfies, BHRR’s Lilly, BHRR’s Burst as his great friends and now has added the 3 Musketeers to his set up for success close friend circle. You can see that he and BHRR’s Dean are getting closer too…one day at a time.

He no longer runs away from the other dogs and does not bark at them the way he once did yet, he still remains quite suspicious of them despite the hard efforts of many of them to love him!

He is who he is and needs a understanding patient right matched personality fit home that will continue to help him be the best dog he can be. He has so much potential and from where he came from when he first arrived to how he is now; is light years!

We do not hide him from the world. We just keep his world as big as he can handle and that too is light years from where it once was. He goes to the drive through – loves plain timbits! and chicken McNuggets too, special rare treats! AND we make each trip an adventure of great experiences.

He will never be a dog park dog – we do not like dog parks to begin with. He will never be the dog that wants to be the center of attention or the life of the party yet, if you are just patient and calm and quiet and give him time; I can guarantee that you will have one of the most loyal, biggest personality clown filled amazing of dogs ever.

He wears his emotions on his sleeve and his heart is massive.

I love that he is so honest in his feelings and that he now trusts that I will not set him for failure.

If that right matched personality fit home never comes along; that is fine too…always is….he lives an awesome life with us.

He is my late night study buddy – yes, as some are now aware I have gone back to school for yet, another degree  – he is the last adorable canine mug I see at night when I close my eyes and one of the first faces I see when I wake up in the morning.

He greets each and every day with enthusiasm and a zest for life that is like that small child greeting the world with curiousity mixed with wariness that wars with excitement and caution!

Simply put, I adore him and he is a gorgeous diamond in the rough!

This is a picture of us on our drive in and he is wearing his brand new Wiggle Bumz collar compliments of his collar angel Tracey! What a gorgeous choice for him!

Will be posting in a separate post re: collars! 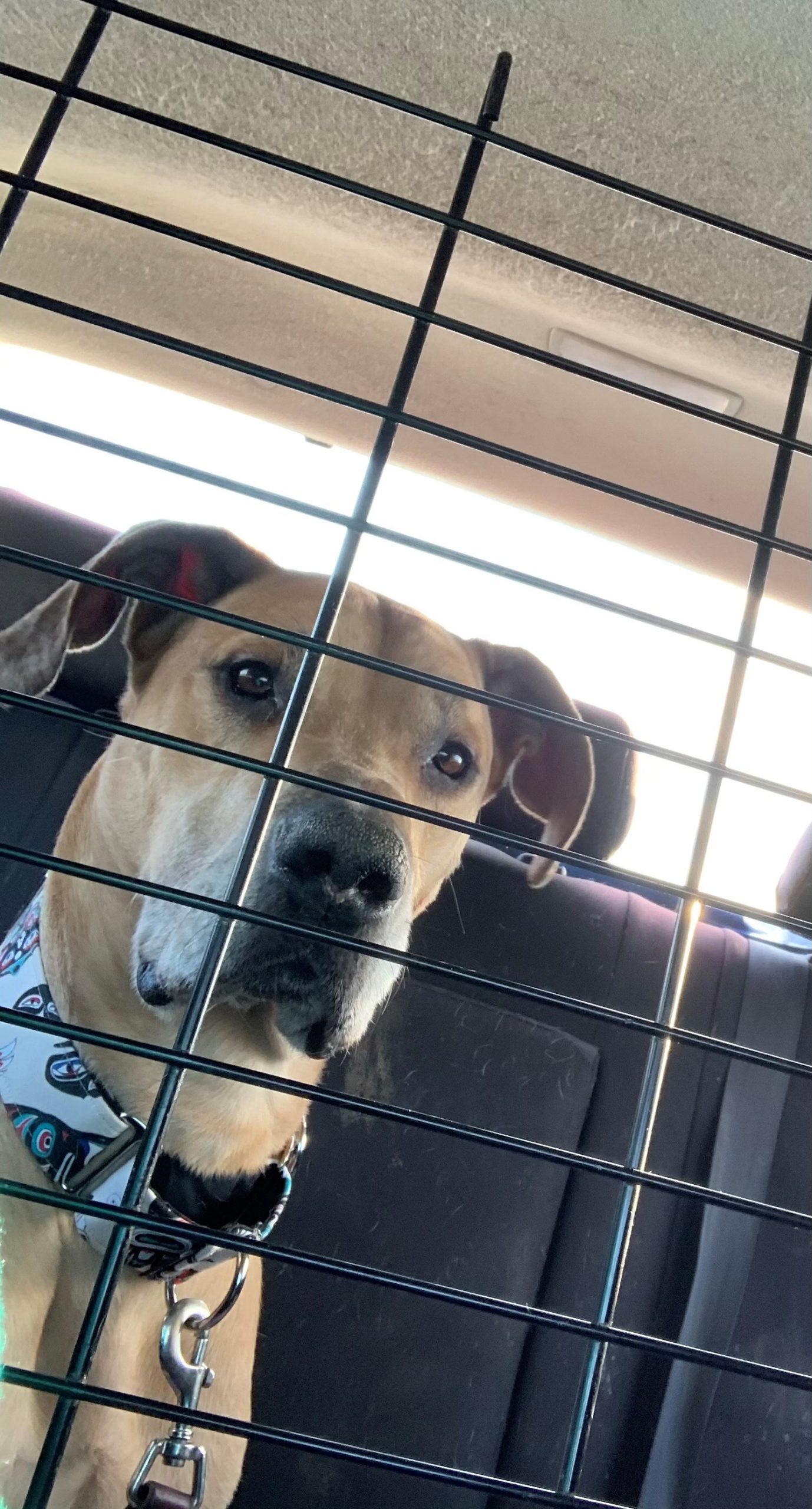