Miss Lily!
(Deaf/Visually Impaired GD)This will be a bit of a Gwennie novel!

Yesterday, she was finally able to be spayed. Her weight is now up to a lean 88.44 pounds and I would still like to see another 5-7 on her for her bone structure and current age.We had wished to spay her earlier yet, it did not take long after her arrival into our Rescue to realise that she has severe generalized anxiety plus OCD behaviours. There was no way until she was further rehabilitated that spaying her was going to be able to be safely done. Even with myself at the Hospital, she was at huge risk in hurting herself.

Anyone that knows me is aware that with my behavioural clients and own dogs, I am not a med pusher. Yet, for Miss Lily, her anxiety was so severe, I had no choice if I was going to properly be able to assist her.

So, in conversing with her amazing Vet, we put her on a low dose of Trazodone BID. It was enough to get her to ‘come down off of that ledge’, focus more and from there we were back on track with housebreaking and being able to go outside at night with the other dogs – what a confidence booster for her! I say all the time that these dogs teach each other far more than I ever could – lowered her shadow chasing plus fly snapping – we are still not ruling out focal seizures on this front and car startling – sometimes when a vehicle passes her by in the car, she would suddenly jump to attention and race back and forth.

She was not pacing nor chewing at her healing wounds from her previous home so much, could actually not just rest but really sleep at night and was not so intense in these behaviours.

In the month or so since she has been on the lower dose, the weight and muscle mass is coming on for she can settle into to actually eat well, as friendly as she has been to the other dogs and almost all people – tall men still make her nervous! – she is even more relaxed now.

She is deaf and visually impaired and being put in a prong collar and also shock collar and not positively balance trained, she was a behavioural and physical hot mess.

While we are not there yet, with her rehabilitation journey, we are a heck of a lot further along that we have been.

She sits, lays down, stays, checks-in, walks so much better on a leash as she is no longer as stress for she understands more since we took the edge of her strain and worry, what is expected of her. I am open, clean and communicative in my requests of her. I am not forceful. I am repetitive, consistent, patient, understanding, kind and full of so much praise when she demonstrates appropriate displays of behaviour.

She is so messed up in her brain that we are just sticking with learning the solid basics, taking it one baby step at a time and she is responding!

I am not making demands of her. I am not manhandling her, I am not asking of her any more than I know that she can give me at any given time and this beautiful girl is blossoming like the most fragile and precious of flowers – except she is a bit of a bull in a china shop with her enthusiasm and zest for life. For, when she knows that she has done something right or is just plain happy and she makes my heart burst with my own happiness with the joy that she has when she sees me.

We are working through crate training and she has no issues being in her crate yet, she will still have an accident as going outside, especially at night, still stresses her at times.

When I felt she was ready to be spayed, I talked in depth to her Vet and we put a sedative med protocol in place so that she would feel no worries, strain or anxiety.

Sean and I began the day before her spay – and I had worked hard on her crate training so that she would not react to being in one of the runs at work.

She had Trazodone(150 mgs TID) throughout the day before her spay, had some Gabapentin(300 mgs) plus her Deramaxx that night before bed.

First thing yesterday AM, she had another dose of Trazodone and I brought her to work when my own shift started and we pre-med her with ACE/Hydro.

She went down like a lamb – gave us a bit of excitement in the surgical suite – yet, that had nothing to do with her anxiety!

We did run bloodwork and also then repeated the CBC to be sure all was good and the only worry after her spay that she gave us was her low temp for the longest time.

We even did some skin scrapings to be sure that she did not have any demodectic mange occurring in some of those healing wound area’s that she will sometimes still ‘bother’ with when she is worried. Getting better as she is re-directing well. The skin scrapings were negative.

Once we had her temp closer to normal, got her up on her feet, Sean came to pick her up and she was calm, very much at peace and 100% fantastic for her whole time at EVC!

Could not have asked for a better spay experience for her…us, not so much excitement needed yet, it was all worth it to make things for her to be so smooth and anxiety free!

She is recovering nicely and while she still has a journey to go with her rehabilitation prior to be ready to make her own special announcement, this girl ROCKS!

I adore her…..I love every bit and piece and hair on her…..

The less confused and anxious free she is becoming, her personality – HUGE to begin with – is just emerging more and more and she really is a gift…….

Thank you to CR, RE plus Dr. G. for being part of her set-up for success team at EVC and thank you to Mason and Sean for coming in to pick her up and take her home so that she did not have to spend another 5 hours there until my own shift ended. Though, per the above, she totally rocked the 7 hours that she was there…… 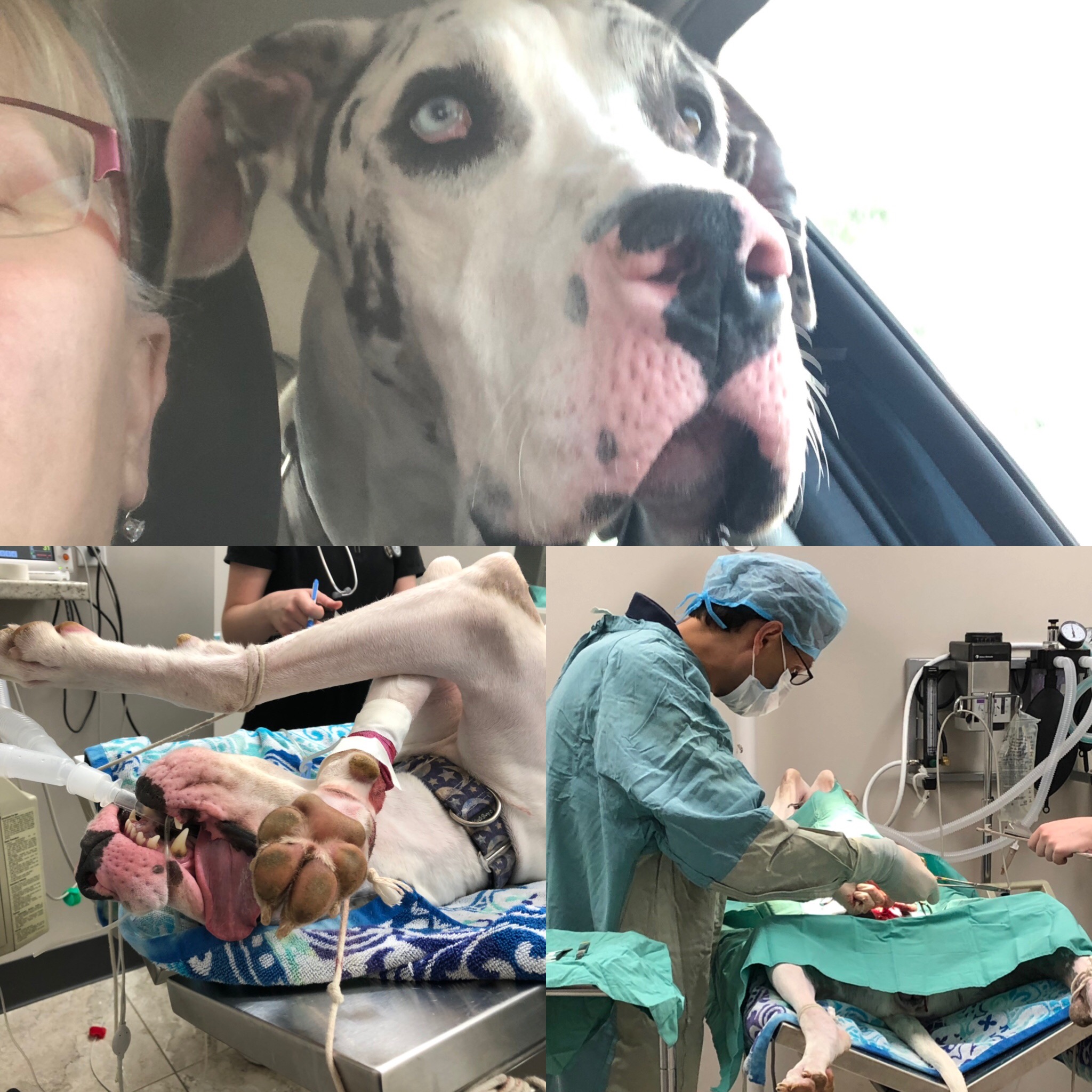