BHRR’s Fletcher it is official….you are either trying to kill yourself or me!

When I got home from work last night or rather the wee hours of this AM, as is my habit, I check in with the dogs and love on them while I eat a snack before going to bed.

From the time the rest of The Boerskins had settled the dogs in for the night and when I got home – not even 1.5 hours later, this was my scene when I went to the sunroom – the place Mr. Fletcher likes to sleep at night….

He has to wear a cone as his leg recovers and he was sitting there with no cone and a rubbed raw bleeding booboo on his head…..

Back to emergency we went……..

BHRR’s Fletcher, the already low money coffers have been dearly taxed and with your now two emergencies this week, the financial cupboards are completely empty….

We also have not one but two new dogs arriving this week with their own extensive Vet Bills – Miss Penelope the Newf & Miss Lily, the special needs Great Dane. We also had BHRR’s Miss Tilly’s own surgery this past week for her spay, which turned out to be an exploratory per our recent post.

The defiant look on his face says it all as to how he felt about his cone…rubbed several spots on his face raw – this one is the worse and he even poked a hole in his head. What on earth did you do?!!

AND to top it all off, chewed the newly installed wood on our window frame with sheer ‘tude.

BHRR’s Fletcher, you have got to be kidding me!!!! You are lucky you are so handsome!!!

Thank you again to the amazing soul who had donated $100 to his vet care when he was hurt on his play date earlier this week….

He will be moving under Eagleson’s Veterinary Care shortly and while the Emerge Hospital no longer take direct donations, Eagleson does. They can be reached at 613-383-8381.

Or, donations can also be made….if any one may consider his cause – we are just under bills of $1,500 this week alone for Mr. Fletcher, donations can be made via PayPal to gwen@birchhaven.org or via email transfer to contactbhrr@gmail.com

May Saturday become a much better day for him and me! 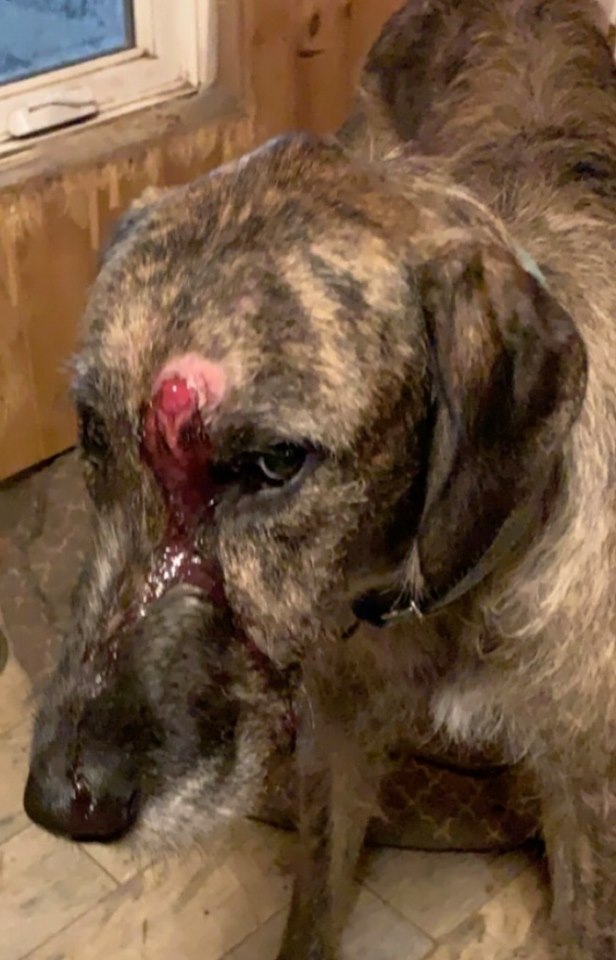