I have added photos #18 to #21 to BHRR's Albert's slideshow. I am also adding two below from when I had him at KAH last night. He is doing SOOOO well overall. His heart and lungs are good, teeth are not so great and if there is any reason why he might ever have a need to go back under an anaesthetic; we shall clean his teeth again; his ears are only surface waxy  now as opposed to the deep gunk of filth they were when he first arrived to BHRR; his toe nails are no longer imbedded into his feet because of the regular nail trimming we do at BHRR; his eyes are less runny due to not being exposed to constant outside irritants, just a little bit of a yeast infection between a couple of his back toes and his fur is very soft to the touch except for the one area on his back along his spine that has seborrhea that we keep under control with access to sunlight plus washing with Head & Shoulders shampoo. BHRR's Albert is in remarkable good health considering everything that he had gone through when he was chained up outside for all of his life before coming to BHRR a mere year ago. Some of the staff (those who met him a year ago when he first arrived to BHRR) marveled at how much tone and strength he now has in his back end and though he was still a bit unsure about things at KAH; they commented on how bonded he was to me. This boy makes my heart just beat with such protective and caring feelings of love for him. May he live a long filled quality of life now that he is safe with us. AND his leash manners are impeccable along with his obedience. I am sooooooooooo proud of you BHRR's Albert! You are an amazing boy. 🙂

While he was not 100% comfortable with all the attention given to him at KAH, he was 'accepting' and only tried to 'hide' behind me a few times. He even 'smiled' – I swear a couple of times! 😉

What made people sad was again seeing all of his 'scars' from his past. They clearly show that BHRR's Albert had a really tough life before being rescued. 🙁

He was unsure about getting into the car when leaving BHRR and I had to help him get in yet on the way home, NO issues whatsoever! He was in my car in a flash! 🙂 He is a great traveler in the car and was more curious than worried with the trucks plus transports passing us.

AND you can see in the second photo that he is actually on a Costco Dog bed! SUCCESS! This was a SS(Secret Santa) pressie given to him this past XMAS, his first real Christmas EVER and he was surrounded by love and warmth and lots of spoiling! 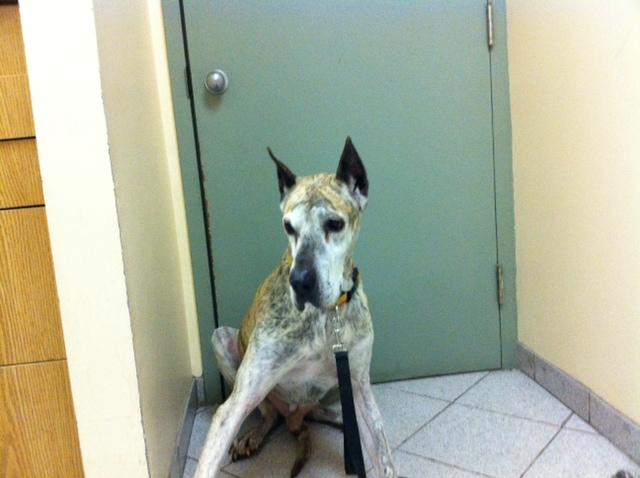