AND someone is now safely dropped off at his emerge temp foster home!

At KAH today, we did Heartworm/Tickborne disease testing, and he is now on Heartworm meds and will start flea/tick meds plus de-worming tomorrow as he is not eating right now. Understandable.

We are also testing his thyroid to determine if he is grossly overweight due to his thyroid and/or is it just too many treats/wrong food etc. and not the appropriate level of exercise. We were told they did not walk him very far as he tired out and panted heavily.

Drinking well and his heart plus lungs sound good! He is lacking serious muscle tone/mass and is now on a weight reduction program. Both his back legs shake as he has so little muscle/strength.

Per his Vet re: hips – it is observed that his right side is worse than his left and once he loses much needed weight, develops better muscle tone/mass they can better assess at that time. Being stronger may eliminate the appearance of his hips, especially the right side appearing to be this way.

Being healthier shall also make it easier to sedate for possible x-rays. His Vet was not overly concerned with his cruciates at this time and I also showed them the video that had been sent my way and at his next vet visit shall be re-assessed for hips/cruciates. His Vet does not believe he has cruciate issues yet will re-assess when he comes back and is more relaxed/settled in. He is extremely straight angled in the hind end plus butt high so, perhaps the video made it seem like things were worse than they are.

His teeth were in great shape and the Vet did feel that he is easily only 3 years of age. Just out of shape.

The vet noted that he was a really nice dog! Would give one paw and then another when asked and responds so well to commands in French. He was excellent in the run at KAH today and so well behaved.

Thanks again Christine for temp fostering him. 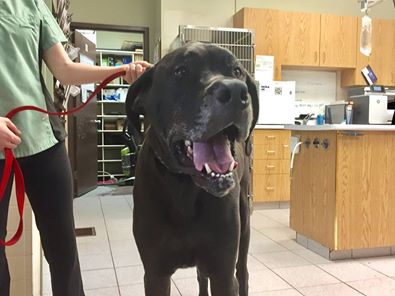