This is BHRR’s Giselle on the way home from a Vet visit at LAH!

She is now a wiggly 58.5 kgs(128.70 pounds!). Hard to believe the once emaciated Dane is now reaching the chunky monkey stage! She has put on 25+ pounds of muscle mass & weight since her arrival! WTG!

AND her personality! Amazing…she has really settled down the healthier she has become with that skin, ears/eyes, feet etc….she is not yet 100% yet no longer one raw wound. She is a real class clown….one still with a strong mind of her own for sure though!

As we prepare for the next steps with her per my one fairly recent post…. the Vet did end up doing an ultrasound today. The Vet had told us this already weeks ago, finding an ovary remnant is so difficult to do via an u/s. We also know this as being factual from the one and only case we have had to date in our over 21 years with BHRR, of a Dane having an ovary remnant from a spay (spay was prior to coming into rescue). We did an u/s and no uterus/ovaries were seen as we wanted to be sure she was spayed and then mere days later she did go into a heat and so, the surgical search was then on for the ovarian remnant and it was found. She was subsequently adopted when healed!

What BHRR’s Giselle’s Vet did today was check that she did not have an uterus or ovaries that could be seen. This would support the ‘scar’ found January 10th when she was brought in to be spayed and also support the virtually non-existent progesterone level testing we were recommended to do the same day the scar was found.

BHRR’s Giselle is now officially confirmed as having no uterus or noticeable ovaries.

So, surgery it shall be for her to find that ovary remnant. Our 2nd Dane in 21+ years of operating that will have had an ovary remnant. AND BHRR’s Maple could be our third…..per that same fairly recent post. We are in a hold pattern with her right now.

At the time BHRR’s Giselle has her surgery, I also would like to have the one eye with the mild entropion addressed again for possible surgical correction for it still bothers her even with the eye infections resolved plus swelling greatly reduced.

BHRR’s Giselle…..we work hard to do right by all of our dogs and so sorry for all the poking & prodding…….to get to the same end result we were at January 10th….that this is a spay scar and then on February 5th….that you do indeed have some remnant of an ovary, it shall be surgically removed and your UTI is gone! 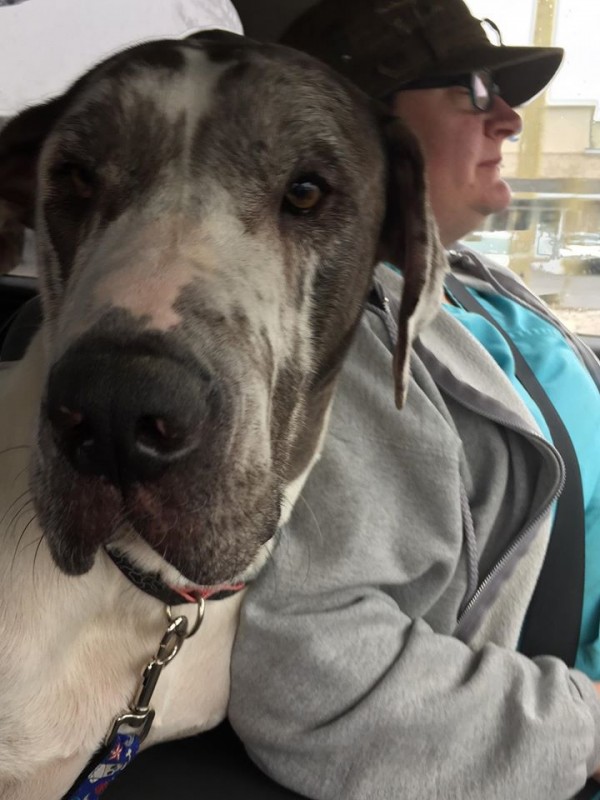