This is BHRR’s Big Ben(Benjamin). His adoptive parents were getting divorced and after 4 years, 7 months to the day that he was adopted, Ben came back to us on August 5th. This is the first time we have taken a dog back due to a divorce in our almost 21 years of operating….. 🙁

Today, I had Big Ben at the Vet for he was overdue for vaccines, had not had any heartworm/Lymes testing done since 2014 nor was he on heartworm preventative since 2014 per the records we received.

I am running a T4 to rule out thyroid.

He had a thorough exam, bloodwork done for heartworm/Lymes testing plus thyroid, had revolution, a much needed nail trim – we will work on training those quicks back again – and we updated his vaccines. He will be proactively/preventatively de-wormed also.

He was such a good boy, always was…..

When we adopt our dogs out we try to be so thorough and detailed in the process. BHRR stands by all of our dogs and our contract states that if for any reason a home cannot keep their adoptive BHRR dog, they are to come back to BHRR.

We were sad to see this home get divorced, passed along how sorry we were and we were also sad to learn that prior to reaching out to us the home tried to place Big Ben on their own first, forgetting about their signed contract with us.

Additionally, in asking for a write up on Big Ben to post on his blog, we read that when the home had children, they were allowed to *ride* Ben as if he was a pony. His lips and ears were pulled and our adoption package clearly states that Danes are dogs, not equines. A true testament to Ben’s amazing temperament is that he never reacted negatively to this inappropriate handling.

Big Ben is now 6.5 years of age and as he settles in more, we will make the determination if we will place him up for adoption again or have him remain as a cherished member of our Haven program. He has gone through so much prior to his rescue to BHRR and now he is back after over 4.5 years…. 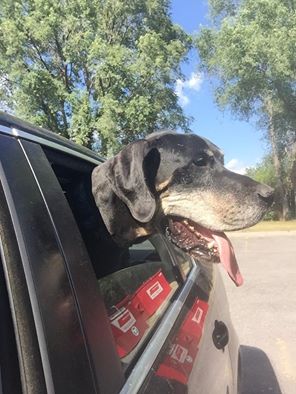