From Lynne:
“We drove the Sudbury to Mattawa leg and he was a great traveller but moving him from car to car was difficult. He was very frightened and I don’t think had much experience riding in cars.”

From Cheryl:
“I’ve heard from Nancy and Dan that their leg went well.”

From Lori-Anne
“Hi Lynne, I’m so glad your leg of the trip went well with that sweet “little” boy-pup, Griffin. To see his fear was so heart-wrenching, but knowing this is all contributing to a new beginning for him helped make up for it. I’ll bet he has never had so much love shown to him by so many people in one day! I’ll be looking forward to hearing that he arrives at his destination safe and sound. Be blessed today!”

From Margaret:
“Griffin is a beautiful and gentle baby.  I got a few kisses from him..  He arrived at KAH at about 2:20.  He is on his way to BHRR and more love than he can imagine.”

From Lianne:
“Meet Griffin this afternoon, we can verify he is 100% sweetie.”

From Gwen:
“Have lots of photo’s and, he came out of the car no issues at KAH. 🙂 Had a large poop and, drank a bit of water at the Hospital and, we took some time just to chill in the hospital…

He is a lovely mixture of a number of breeds, Schx possible. Now, an honorary giant of BHRR.

Thank you everyone for helping to get him to us!!!

Will send photo’s when we are home and settled…. “

From Rose:
“Thank you so much to everyone involved in getting GRIFFIN out of the Pound and into the arms of Gwen at Birch Haven. I just spoke with Gwen and GRIFFIN is doing wonderfully.

Have a great weekend everyone.”

From Lynne:
“Thank you so much everyone. He was so stressed this morning that I was really worried about him. Now I can relax!!
He is going to be a wonderful companion for some lucky person/family.
Thanks everyone. We did a really good thing today!!!”

From Nora:
“Hello all
While Griffin seemed apprehensive getting into my car, he laid down in the hatch and didn’t make a sound the entire way.  He poked his head up once to look around when we went over a rough patch of pavement, then went down again.  You would never know there was a dog onboard.  I talked to him enroute in what I hoped was a soothing, upbeat voice, hoping to reassure him somewhat.  The transfer went smoothly.  Griffin’s eyes are limpid pools filled with sad stories; he touched my heart.”

From Nora when the two below photo’s were forwarded onward to everyone who helped make his rescue possible:
“Delightful!  In the first pic, I can see a glimmer of hope in Griffin’s eyes.  I do love the second pic of him leaning against Margaret, which shows that in spite of his sad, young life, he is still willing to take a chance and trust, and his need for affection.  It’s heartening to see a happy ending to Griffin’s story.  Well done, all!” 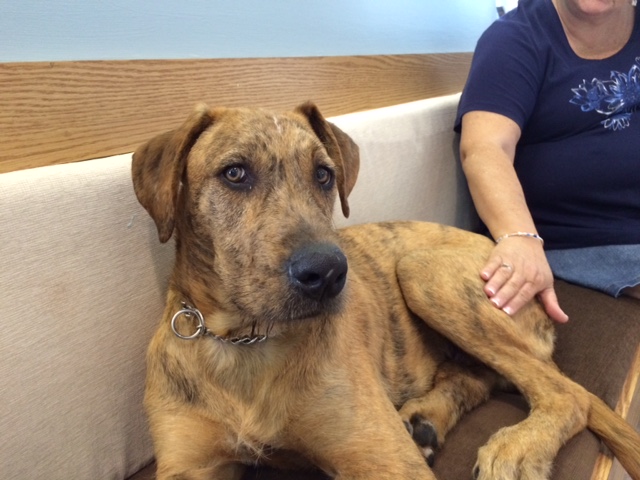 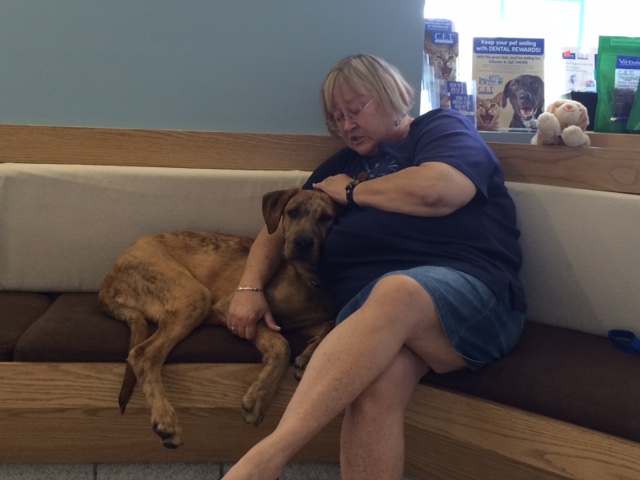