OK! I know that these pictures #6-#10 are a LONG time in coming and THANKS so much to everyone for their continue patience. I feel that June and most of July has just flown by in a blur with all that has been on BHRR’s plate and also on our family’s. YET, I think you will all agree that these pictures of BHRR’s Moose are WELLLLLLLLL worth the wait! 😛 😉 They are taken from June 27th and I am adding two of them below. BHRR’s Moose has one more ‘test’ to pass and depending on how well he does; that will depend on ‘when’ he shall be placed up for adoption. AND this has to do with his nails. We are ready to tackle them and if it goes as well as I hope(not expecting perfection), then I will feel that he is finally ready to be placed him up for adoption! He will have made HUGE strides in his handling and obedience skills since he has arrived and if he is not yet ready with those tootsies, then we shall continue to just work on his comfort levels and try again in another week or so. No rush. The way Moose will just sit or lay down and look at me with those huge brown and soulful eyes just ‘grabs’ at me. The trust he has placed in me and what he will let me do already with being able to get into his mouth, take items away(he will try to hold on to them more in ‘game’ than anything and no resourcing issues whatsoever), pull at ears and tail and I can now handle all four feet really well without him becoming stressed out at all BUT he will give me a ‘look’ if I am on them to long. I then just let them go, praise him, give him a treat sometimes and we just move on to other things. OMG! He so loves the black KONG toy here and he will chase his tail sometimes and we are working on re-directing that behavour. He most likely picked that up while he was locked up in that one person’s garage yet I cannot state that in surety. He is just awesome in his crate and goes in when asked(I do not as of yet trust him 100% free roam when we are not at home) and he loves his special yummy treatie in there. He is also currently fed in his crate, more because he does not eat super fast and I do not want another faster eater – Hmmmm BHRR’s Koop! as one example – taking it from him. All dogs know that we will not allow any other dog to take any high value items away and I can have 23 dogs munching in harmony on Smoked Dino bones etc. without any issues. Some things, I do believe dogs should work out between themselves, other things, NO WAY! I am the leader female and Sean is the leader male and it is up to us to set the expectations in the pack on rules and acceptable plus appropriate levels of behavour. The other thing that I want to mention about BHRR’s Moose and his eyes is that when he looks at me, I see that he is beginning to trust me with his whole being and he makes me feel like I can accomplish big things BUT I also see some worry in his eyes and we want that to not be there before he is placed up for adoption. He also loves sharing his drool and water from the water bowl. DROOL towels a must with this boy!  😛 Sean and I agree that he could not be more aptly named with that big ‘ol ‘moose head’ and that ‘moose’ temperament. Many a day, I have to make Moose think it was ‘his’ idea about doing something I want him to do. LOVE it! I do know that I would like to see BHRR’s Moose in a home with at least one other dog, male or female as long as they are compatible for Moose loves both and his 2nd bff is BHRR’s Kingston(a neutered Newfx) and of course his first is BHRR’s Lily Belle. His new forever loving home must also realise that while he lives in harmony with 20 other dogs here, he does not exactly love my two intact blue show boyz, TAIN and the Big Blue, Bronson. He will try to bully and push them around and he is corrected and does not look one bit ashamed of himself in trying to do so! He needs an experienced dog home, not necessarily an experienced Saint B. home and at this time, it matters not if the home is a full-time working one or not. 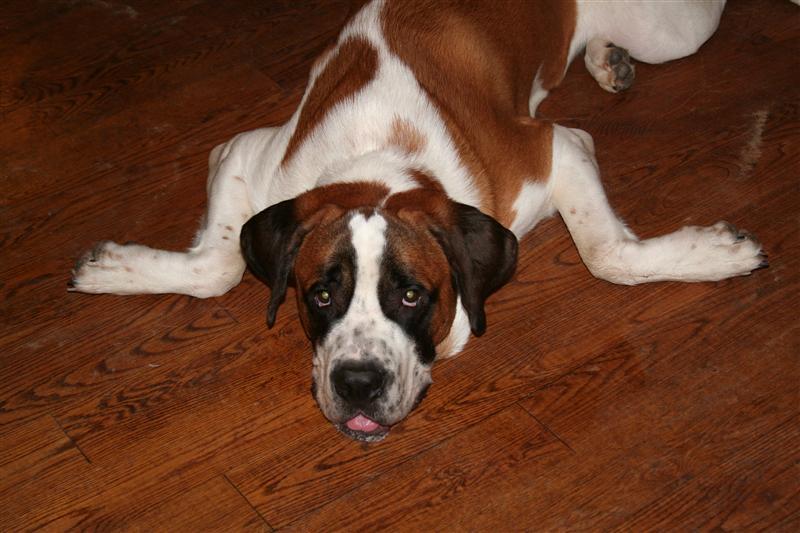 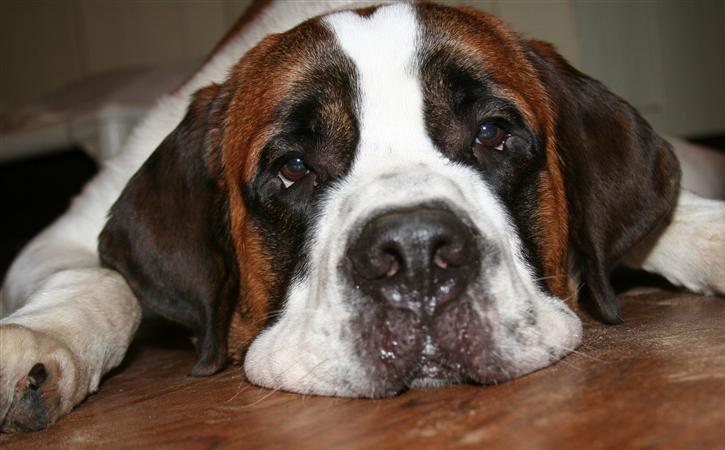