Last night I noticed swelling in one of Dana’s toes on her right front leg. She was not limping noticeably yet upon close examination; I noticed that it was painful to touch and Dana was SO good to allow me to look at her foot as closely as I did. I was worried about a puncture and then when I felt it and could see more; I started to be concerned about a break. I was out all day with Kinsley having had a Dentist appointment and then errands and Sean got home about 2 hours before I did and he did not notice anything ‘off’ with her. I suspected a possible broken toe and I booked an appointment for today and my poor doll face! 😥 I have scanned in one of the pictures of her foot below(I have copies for her complete medical records for when she does become adopted) and the middle phalange is a comminuted(crushing) fracture. You can clearly see all these bone fragments on the digital X-Ray(much harder in the scanned pic post below) and that it is just a mess. We spent quite some time ‘speculating’ the possible cause of this and the Vet said it looks like a Horse stepped on her yet that was not possible(she was inside all day) and had not been near the horses since the weekend plus if a horse had stepped on her; the Vet and I agreed that it would have been more than one toe crushed. We also discussed could she have caught it in a tree ‘root’ in the newly fenced in area; possible yet not likely. Sean and I walk that area daily to take note of the areas for probable ‘diggers’ etc. and we have not noted any hazards that could be the cause of this and I just wish she could speak!!! The other theory is that one of her bestest of friends; 200 pound Guinness stepped on it. She was such a happy camper at the Vet, with tail plus butt wagging that would rival BHRR’s Mazda!  😛 The Vet could not believe how she would literally walk pretty much normally on her foot too. WHAT a trooper! She is just so friendly and social to everyone and I know that she would have loved playing with the Vet’s dog(they have gotten along so famously since they originally met when I first brought in Dana last November) yet she was mildly sedated to X-Ray(she had to go up on the table and the angle of the foot) yet she lied in my arms very quietly and trustingly. MY best news is her weight!!!! When BHRR’s Dana first arrived on November 27th, 2008; she was a starved 29.2 KGS (64.24 pds). Her weight tonight was a very healthy, conditioned and gorgeous 51.40 KGS (113.08 pounds)!! The Vet said she looked amazing with her shiny black coat and that she is just perfect with her weight! YOU GO DANA!!!! This means that Dana has put on 48.84 pounds since her arrival to our program and home!!!! YAY! For Dana! In respect to her toe; we discussed splinting yet that was not really feasible and so, it is expected to heal just fine within 6 weeks or so and I will monitor closely. She is on Deramaxx 100 MG SID(I might split it to 50 MG BID for comfort for her) and rest…rest…rest. AND for anyone that knows Dana; that is like asking the sun not to rise or set. I had Sean pick her up on his way home around 6:30 PM for I was working until 8:00 PM and she has been resting comfortably in her crate since. I will not adopt her out at this time until her toe heals. So, she is on a HOLD right now…. Once she is back to 100%; I will make her available again. We are all so perplexed as to HOW this happened and man, what a happy girl she was FOR she has to just be in such pain. I; well know what it is like to have broken bones in my foot; compliments of BHRR’s Henry breaking my foot in 4 places; including a spiral fracture and it is not fun. 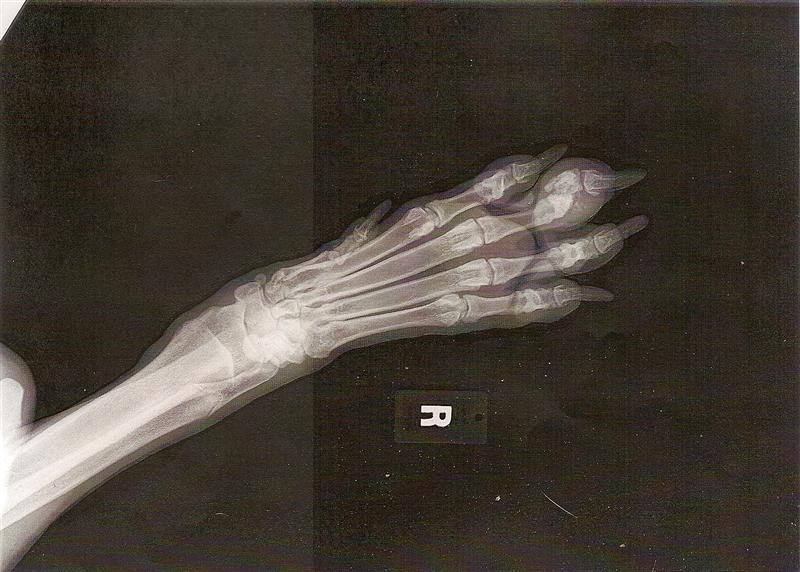