Does anybody recognise this blue beauty!? She arrived to BHRR May 29th!

She and BHRR’s Gentle Jake were at KAH tonight.

BHRR’s Gentle Jake had his updated rabies done and is up another 11 pounds!! 129.14 pounds now. Wtg! The scale still makes him want to ‘throw’ his weight around and we worked through it and he learned that he is ok still. 🙂 He remains Available For Adoption!

BHRR’s Limerick had her second booster, re-visited her skin which her coat is looking much more shiny and glossy, had her ears looked at closely, heart and lungs checked out again, and we did an u/s probe to see if she was pregnant or still a possible false pregnancy. No babies seen in the ultrasound. Her weight was up also and we were able to get a better exam on hips, knees and that toe of hers.

When she is able to be spayed, we will do x-Ray’s and get an even better exam yet I strongly suspect HD and cruciate issues, the poor thing and her one back toe may need to be amputated due to past trauma.

We remain committed and dedicated to her care and what she needs she will have!

On a side note, she blew everyone out of the water at our June 26th, Mini ‘EXPERIENCE’ open house!!! She was more than ready to mix and mingle and I let her tell me how she felt. She made it clear she wanted to be with the 31 people in attendance and while a bit unsure here and there, one butt scratch and rub from people and she was like ‘oh yeah, we are totally going to be great friends!’

This extremely fear reactive Dane that first arrived to BHRR was ruling the day and she is only going to get better! People approached her properly and were so kind and loving!

BHRR’s Mama Great Dane Eve also blew it out of the park!! She made it clear that she also wanted to socialise and OMG! That terrified Dane from December when she first arrived and also in February is no longer! She gracefully went from person to person and when she got her own rump rubs, she was ‘won’ over!

AND BHRR’s Skye, was chilling and relaxing herself!! Not one fear growl or anxiety shown.

So so so so proud of my girls……they have been smokin’ their individualised rehab programs and I literally had tears in my eyes with how fabu they were and the great day they had and seeing how much the world does have to offer in gentle caring spoiling hands and experiences!

We want to thank everyone that came out on Sunday and for all the donations and for making our last ‘EXPERIENCE’ mini open house for 2016 the best! AND man! Despite two a/c’s pumping, it was HOT! 😀 24 tired yet happy dogs also that night! 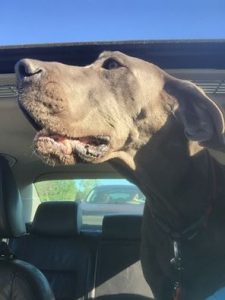