BHRR’s Ava Marie had a good night all things considered. Her Hydromorphone began to wear off around twenty minutes to 11 PM and we got her up on her feet and outside to see if she would pee and to give her a bit of a mental/physical stimulation break from her laying and thinking of her healing pain. She still could not figure out how to squat and pee with her leg and she did enjoy just standing outside in the lovely night air with us slinging her for a few minutes. Brought her back in, settled her down and everyone was in bed by just after 11 PM. I was up at 1:05 AM and checked on her and she was doing well and so I went back to bed. I got up again just past 3 AM and she was still hanging in strong, so I held off on the second injection of the Hydromorphone until I knew she absolutely needed it. At just after 5 AM, Sean called me and I came out and we gave her her antibiotics, a Deramaxx and tried to see if she might pee yet she still was not able to get things figured out to pee and she wanted to go and lay down in her favourite spot in the fenced in yard and we had to greatly encourage her to head back into the house. Once she was in, I gave her her Hydropmorphone injection and she went to la la land until just past 10 AM. Gave her a tiny bit of wet dog food of which she ate most of it and then we tried to see if she would pee again. She was determined to drag us to her favourite laying spot and it was an effort to get her to come back inside sans a pee. We knew she had to go yet we also knew that while we could encourage and support her, we could not pee for her and she had to figure it out on her own. That is the hard part, watching them ‘struggle’ for she had to pee and is housebroken yet could not figure out as of yet how to squat with that leg to pee while we were outside. We got her back in and she drank some water and then she rested on and off again until this afternoon. She has been very determined as well to ‘go’ for the incision and she has to be watched 24/7. I have a 40 cm collar on special order yet it shall not be coming in until about Wednesday, so it is constant ‘on’ her to stay away from her surgical site. I called LAH to give Dr. Liston an update and unless something untoward happens, I shall next be seeing him when it is time to take her staples out for I would like for him to recheck that area then instead of taking them out at home by myself. The bruising is beginning to come out big time and she has one area where the tension of sleeping, bending and turning(and she lays on both sides really well on her own and we do not have to flip or roll her now) where the staples have really pulled. It is very common and we will watch it closely. She has some drainage and our washer is working overtime in keeping the duvets/comforters clean for her. This afternoon, Sean helped me get her up and out again and she just almost pulled us out the door and I thought to myself ‘this is it’, she has figured it out!!!! YAY! She took us out on the front lawn that needs to be mowed 😛 and the grass was tickling her feet and she had her first pee and a nice big one and I not sure who was more relieved us or her!!! GOOD girl Ava Marie! I know she has to poop as well yet this was exhausting for her and so, we headed back inside, I gave her some tramadol(she can have this in addition to the Fentanyl patch) and she drank a bit more water, had another nice large tablespoon of high quality wet dog food and she has been resting most comfortably since. I will take some new pictures of her surgical area later today to post. We are now working on saving up monies and accepting donations for her second surgery that should be happening in July should all go well and THANKS so much to everyone for being there for her. For those attending our Fencing weekend coming up on June 5th & 6th; I cannot wait for you to meet her (if you have not yet already!) and then also those attending our June BHRR Mini Open House. At this time, BHRR’s Ava Marie, will be one of the Ambassadors at our 3rd ANNUAL Microchip/Nail Trim/BBQ Fundraiser coming up on Sunday July 18th.

Update: May 22nd – 10:04 PM – Picture of BHRR’s Ava Marie’s right leg/knee from tonight. She was given about 1/3 of her normal supper ration and ate it really well. She has not wanted to drink anything since this afternoon yet is resting really well. She also did not wish to pee again earlier tonight and has yet to poop yet with being fasted than having surgery; this is not completely abnormal. With the ‘gas’ she is having, it will not be too long now. Before we go to bed, we shall take her out again on the front lawn to see if she would like to pee. 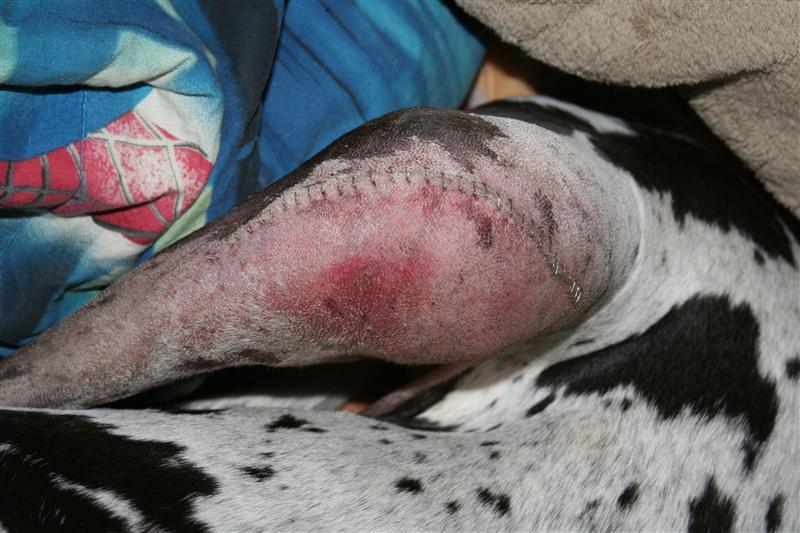