I have added new photos from February 25th, 2010 to BHRR’s Potter’s slideshow #32 – #35. I have so many more to add. This boy is soooooooooooo photogenic! LOL He just ‘works’ it for the camera…..well, ok, he does not have to work hard as he is just so positively adorable, his ‘quirky’ ‘tude and all! He makes me fall more in love with the Boxer Breed daily! Of course, there shall only ever be one Potter AND gosh, he just makes me smile! I am also adding one photo below taken from February 25th, when BHRR BOD member B. Cole was visiting. This photo is of B. Cole with BHRR’s Potter with a Check of $560 – This is what I have called our ‘BHRR Photo of Appreciation to Global Pet Foods – Kanata’ and we sent it to Karla/Shawn of Global Pet Foods – Kanata as a memorial thanks for their Calendar Fundraiser that brought in a grand total of – $1,874.75 to BHRR! I want to thank everyone profusely that has continued to send in funds for BHRR’s Potter’s Path as we still are trying to raise another $1,122 to pay off the remainder of his Vet/Rehab bills. I also wished to say that in the last few weeks, I have noticed a considerable change in Potter. He is even more happy and energetic and full of life and this gives me the best of hopes that we have kicked the ‘BIG C’ in the tush finally and that he is going to be able to live a much longer and quality filled life than at once hoped for. Everything crossed for this boy! What we do know for sure that if we had not removed his leg last November 20th, 2009; that he would now be dead. 😥 It was such an aggressive MCT. For the couple of people that have felt that we have not done the best for Potter by taking off his leg and felt that we should have put him to sleep instead, I invite you to come to one of our BHRR Mini Open Houses(we have one coming up in June) and meet him for yourself, or come to one of ‘his’ soccer games(gosh, he is going to be so excited as SOCCER is Potter’s thing!) when they start again for the kids or come to one of our GD/Honourary GD Walks/Hikes and then tell me after spending just five minutes in his presence(I think it will take a lot less time for Potter to work his magic) if you felt he was not just as deserving as any other dog in need out there of the best that life can offer. I am sorry that you feel that it was ‘cruel’ or not ‘humane’ to remove his leg, yet I am sure if Potter could talk, he would tell you much differently. I look in Potter’s eyes daily and I could never imagine ever saying to him, ‘I am sorry but…..you do not deserve to have a chance at living, so I have to put you to sleep.’ When BHRR committed to taking in Potter last July, that is exactly what we committed to; we became committed to Potter. It was not his fault he was born deaf(also something that bothered these same few btw that contacted us) and NOR was it his fault that he developed a very aggressive MCT. BHRR is about not just Giant Breeds, yet those that are Special Needs and we are going to continue to help where we can and I do not think that one person that has already met Potter and to many that have not yet met him; that they would/do feel that he is not worthy of living NOR that he does not now live a fantabulous life! He can run faster than many 4 legged dogs and boy, there has yet to be a tennis ball that can best Potter! AND having three legs, most definitely has not stopped him from getting up on to our kingsize bed or being one of the first to his food bowl or call ‘shotgun’ at the car as he arrived there first….or……or…. 😀 AND to those that he has graced with kisses, he will have you at the moment of ‘the smooch’! AND being deaf, that means nothing, at least to Potter and to people like me…he listens much better than many ‘hearing’ dogs I know out there owned by others plus being deaf is no reflection on his intelligence level or ability to learn.  😉 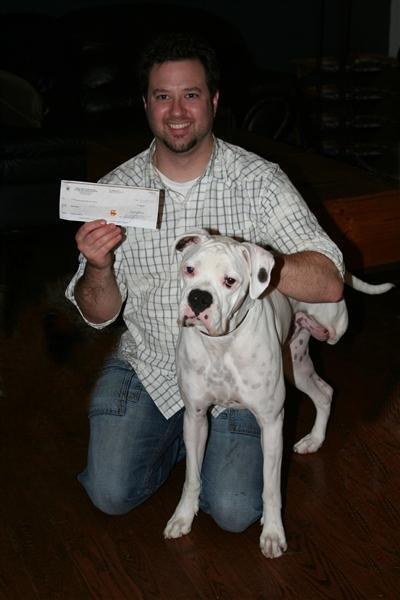