He had another play date on Saturday (same lovely folks as from December 31st) and went to a place called CocoMutts in Stittesville. I am going to have to head back myself for I have heard that he had a lovely time and that this place is a true gem! 🙂 AND apparently, BHRR's Veteran is a bit of a celebrity for several people recognized him and many marvelled at how well he is doing and wishing him the very best for the future.

To whomever comes along and is his right matched forever loving home; this boy has touched the souls of people all across the globe and the world is going to to want to know who is the lucky family! ARC wants to do a piece on BHRR's Veteran when he is adopted in their 'Furever Fridays' section. So, to those that are considering applying for him; do know; that you shall become equally 'public'. 🙂 SO many are following his blogs closely and as per our promise to each dog that crosses our doors; ONLY the right matched home shall be approved for him. We want successful adoptions and work hard to strive to keep each adoption that we do successful!

He is NOT going to be any person's 'status' symbol nor a guard dog. BHRR does not support homes of those types. He is going to be a very lucky homes most cherished addition to their family and we are committed to ensuring that this happens for him.

If I did not mention it already, BHRR's Veteran got along famously with the lab that was in the home when we did the hv recently PLUS on Saturday, he also met a senior Boxer during this play date(10 or 13 years of age….my memory eludes me right now on which one!) and I even saw a photo of all adorable they were!

He continues to do great with most dogs and there is still a dog here and there(a Senior Golden at KAH stressed him on Saturday yet his tail was wagging as he gave that big deep 'ol' woof) that worries him; yet with the proper introductions and integrations under calm and confident people plus surroudings; he is relaxing. He was fine with the Senior Greyhound at KAH and all the other dogs in the reception plus back area.

I was told just how well mannered plus obedient he was on this play date and that he still likes to SHOP! LOL

THANKS to his play date humans for purchasing him goodies plus a new dog leash! 🙂

I am attaching two photos below from his December 31st, 2012 play date at B&F in Kanata Centrum. 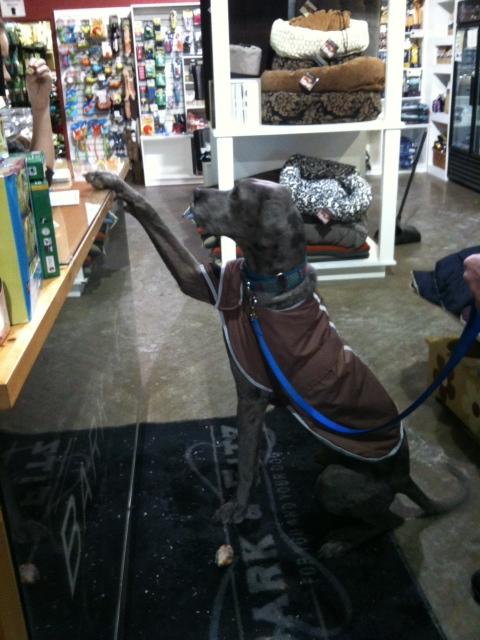 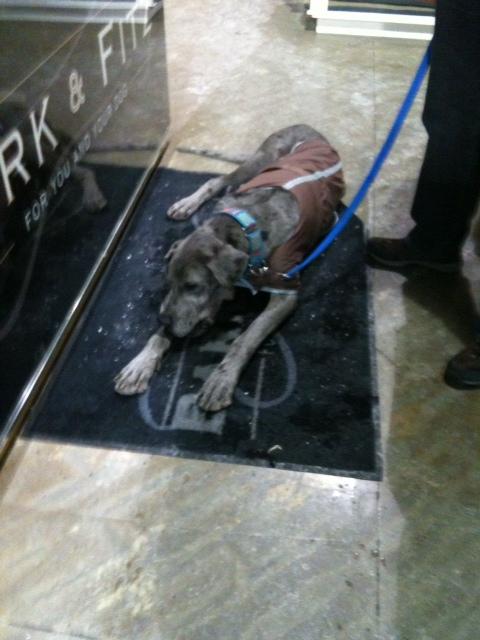