"Another great night. He is all ours now. lol. If this is him unadjusted WOW!!!!! He is testing boundaries to see what he can get away with. The look on his face is priceless when he gets caught or told no way mister that is soooo not allowed. 🙂 He has the "who me" look down pat. He and Temple have gelled so nicely."

"Thought it was time for an update on your “little” man Apollo.  I did have to laugh out loud today as I read his papers ect. 95% of it with the exception of outsourced obedience we are already doing. WHEW! 😀   He has settled in so well.  He does test as all kids do. Wink, wink.

I have not had any issues with food at all. In fact both dogs leave some food maybe half a cup  in the dishes and nibble for about 15 minutes if I am not in the room I remove it just in case. But honestly they both respect each other’s space. They have traded bowls on occasion when I turned my back to load the dishwasher but I redirected them back with no fuss or muss.

We have a bit of grumbling over footballs as they were a fav here before Apollo and he wanted to try to claim them as his own. We had a firm discussion about “manners and sharing”  gentle reminders keep things on track.  He has been exposed to tiny 7 pound terriers with no issues but reminded to be gentle. He plays well with our senior neighbours dog and it would seem we have the communal back yard this year with people, kids and dogs coming and going when we are home and he takes this all in stride.  He does look to me for confirmation that all is ok and being non reactional with him I have found is key. As long as you are relaxed so is he.

We did a walk about and he and Temple did fab on the split lead.  We practiced in the yard first. LOL.  Hot pavement and sidewalks cut our  walk short as I am now more aware of Birch Haven pads 🙂 I have kept him in a room with Temple when I am not home. He will come for Gray before me. LOL.  He is doing so well and such a sweet treat. Everyone that comes over for a visit can’t believe he has not found his forever home yet.

Never thought a “blond” would take over part of my heart but this boy sure is something special." 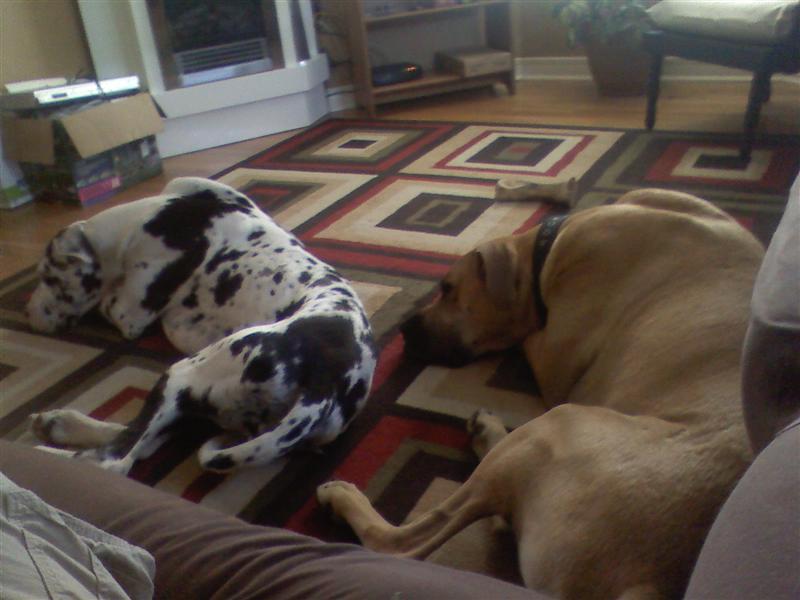 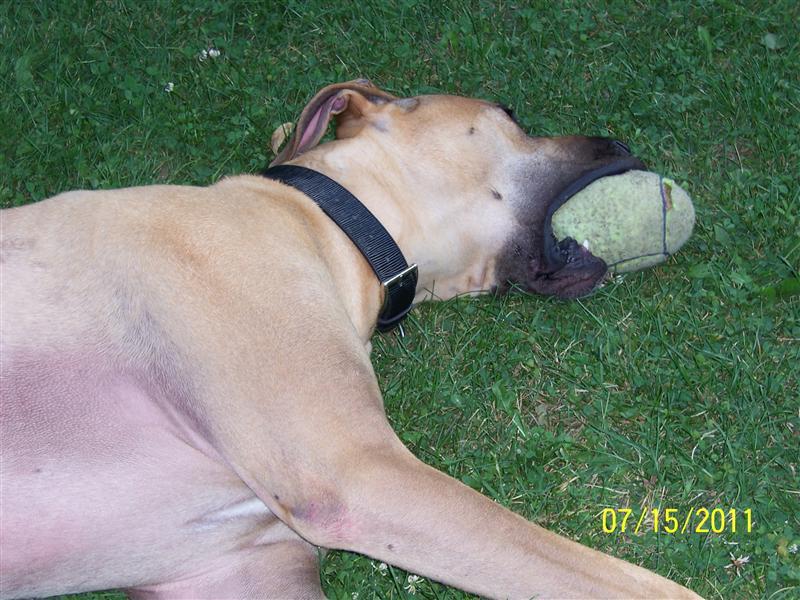 BHRR's Apollo with Temple – HE has a *thing* for those Harle females! – July 2011 & his football! HE loves soccer balls/footballs
*photos courtesy of T. Vaive

IF there had been a ramp at the Take The Plunge this past weekend, I would have brought BHRR's Apollo to compete! He will not do those many stairs. While there was a ramp in the pool for dogs to use to get out and some used it to get in; there were quite a few stairs to actually get up on the dock. BHRR's Apollo would have had no issues launching himself into that pool! There was one 'dock dane' there that competed last year as well and we would have loved to have been the second Dane yet those stairs did not make it possible.

AND to have brought him and for him to have heard, seen and smelt the water and not to have been able to swim; would have been hard on him. So, he remained at his temp foster home.