"BHRR's Holden has now been integrated with half the pack here and WOW! What an amazing boy….for all the bad out there in the world, being able to be part of something so important and precious of helping another in need and seeing them travel along their journey of rehab to a better quality filled future makes me feel so thankful to so many that help save these incredible creatures."

"BHRR's Holden is now integrated with everyone and has made himself at home! He has decided that 'Bleach's' couch is a great place to lounge….

He finally ate something for me around 3:45 AM today and had a good night. This AM he decide…d he was going to play with Kinsley's EM Caffrey and that got the house rockin'!!! Sadly, that is when we heard the first coughs so on to RAW honey. His neuter incision is also bothering him so tending to that to maximise his comfort. It really feels like he has always been here and sigh….what a real sweetie!!!"

I have added four more pictures to his slideshow – 2 from his transport to BHRR and 2 from when BHRR's Holden first arrived – and we had the other dogs crated or in the bedroom so that he could settle in at his own pace. What is most interesting from those two photos is that BHRR's Hailey; who reminds me quite a bit of BHRR's Mindy; is not a 'fan' of dogs being near a crate when she is laying in it as it just upsets her sense of interpersonal space and what she believes who can and can not be near her. She is like a royal princess some days, that one! LOL YET, in these photos, she not only has no 'snobby' 'tude at BHRR's Holden laying next to her and would have with the other dogs just turned her back to them LOL, she actually moved herself so that she was touching him through the crate!!! It was awesome!!!! I sooooooooooo love BHRR's Hailey!

I am feeding BHRR's Holden 5 smaller meals a day right now and he is eating some wet food yet not fond of the kibble(most likely was fed scrap human food while he was on that abandoned property) and has not drank anything today. He is weak yet he will wag his tail and he is already following Sean around….I keep saying 'what about me!!$*&%%?' and BHRR's Holden will look at me, wag his tail slightly and then keep plodding along after Sean! There is a HAM inside this boy and I cannot wait until he comes all the way out!!!! 😀 He has slept a lot today or just has layed down on Bleach's couch watching the other dogs play and  move about. He seems to take enjoyment out of just being 'around' others. He is a pack animal for sure!!!! Is it too soon to say that when this boy is adopted, that my heart is going to thump??? He is a 'gift' and we will ensure that his new adoptive home realises that…..He had one day before he was going to be pts in KY and to think that the world would be missing out on such a 'gift' would be a shame….. 🙁

He also is 'ok' about asking for love…very calm, quiet and unobtrusive…just will stand by you; almost afraid of rejection yet drawing up the courage to at least ask for some affection…sigh…makes my heart just wrench to see that hesitation YET in time, he will learn that he will get all the love he can handle!

He is also fed in a crate as he is somewhat stressed with any other dog thinking about getting his food. To his new adoptive home when he is placed up for adoption and they come along; he will need to be fed in a quiet place away from other animals as this boy has had to fend for himself for 2 years(at least!) and it is plain to see that he did not fare well; with how scary thin he is. 🙁 Once the bowl is out of his crate, he no longer makes any small low rumbling sounds in his chest. He will learn that he shall always be fed enough, on time and that no other dog is going to take his food away. As for humans, you can touch his bowl and him and his food no issues at all. AND considering how much it would be understandable to think he would be a food recourcer or guarder, he is extremely mild. No lunging, barking, snarling; just some low rumbling. He is fed in a very public area; which his crate is in the sunroom; where my BHRR office is and he has had no issues at all with dogs walking by his crate or himself as long as he does not have a food bowl. 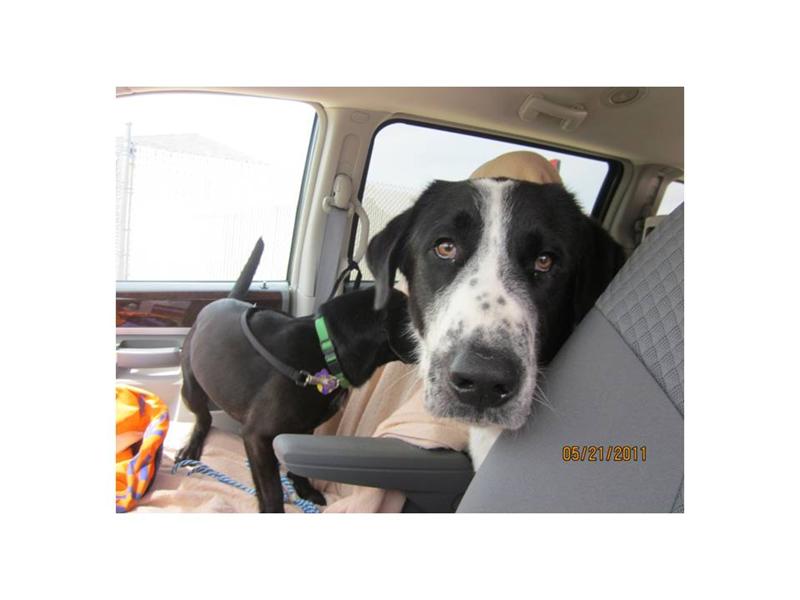 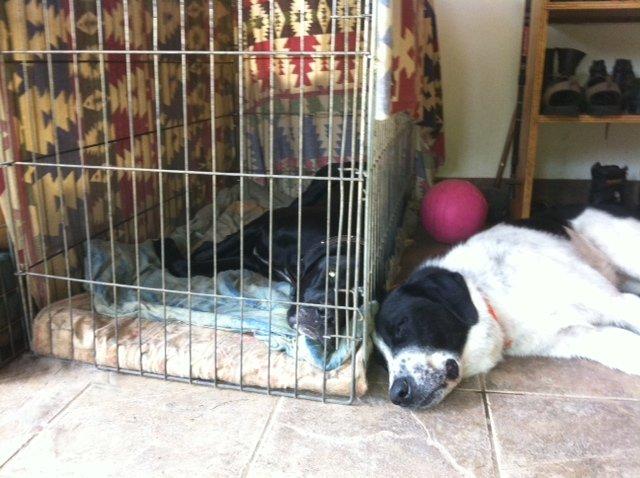