This is BHRR’s Carlsberg, one of our Bakers Dozen.

DNA Proven To Be IW/Great Dane

We will be sharing much more on his medical situation shortly and continue to do so as things unfold.

On December 10th, as I was in Hamilton getting ready to do BHRR’s Cagney’s home-visit for a possible approved adoption, Sean called to say that BHRR’s Carlsberg was not walking.

After asking some questions, Sean rushed to Alta Vista Animal Emergency while I called them to set up BHRR’s Carlsberg’s file and give them a heads up that Sean/Kinsley were on their way. After that, I reached out to his future adoptive home(he was to be adopted December 11th) to pass along what I knew to date and they also went to the emergency hospital.

After exams and x-rays – no trauma could be seen – plus more testing was done, a neurologist, Dr. Chauvet was called into the emergency to do a consult. Further testing (MRI) ruled out definitively that there was zero trauma and that this was a Fibrocartilaginous embolism (FCE), otherwise known as a ‘spinal stroke’.

It is NOT known what causes a FCE and BHRR’s Carlsberg is the youngest that the rehabilitation department at Alta Vista’s speciality Services has ever seen.

There has been some thought amongst r/q Irish Wolfhound Breeders that there is a possible strong genetic link with IW pups & FCE. In reaching out to several in my own show network, this has been a strong consensus that there is much merit in this thought.

There are no surgical procedures in existence that can remove the blockage.

We have been working side by side with his incredible neurologist since the spinal stroke on December 10th as well as with the wonderful home he had been approved to be adopted to in addition to Nancy, the rehabilitation fabu woman extraordinaire.

In short – all four legs were affected and this was what was called an ‘ascending stroke’, the worst kind to have.

Right from the beginning his neurologist has called herself BHRR’s Carlsberg’s ‘godmother’ and has urged none of us to be rash in making any tough decisions and to remain patient.

To those ‘armchair quarterbacks’ who may feel they know more or better than the expert team on his case, let Sean, myself, the home he was to be adopted to and Kinsley be very clear, you do not and could not ever know more or better. They know his case best and we know BHRR’s Carlsberg best.

The delay in making his first post was for several reasons:

1) we truly did not know what that first week would bring and still do not have a crystal ball yet we have much better/more direction and a much more positive prognosis now. We are taking one day and one appointment at a time.

2) as the OHS so wonderfully recently stated…what has been their biggest/greatest blessing has also been their curse and as the numbers increase on our own page, there are going to be one or two or even more that are not going to agree with the move forward treatment plan put in place and that is fine.

However, since our inception in 1996, our position stands strong that we shall retain a zero tolerance approach to ‘armchair quarterbacks’. So, to those who think BHRR’s Carlsberg should have been immediately euthanised & wish to express themselves in an inappropriate manner, think twice.

Agree or disagree or agree to disagree is totally fine. Yet, unless you are his neurologist and rehab team and BHRR and the home he was to be adopted to, which makes us the experts on him and we know what is or is not in his best interest. Please respect that.

First and foremost is always quality of life for our dogs and he deserves the opportunity to have this…AND the prognosis is that he WILL walk again and while he may well require that right front leg to be amputated, we will take those steps as they come along.

3) we wanted to group closely together as a network with the home he was to have been adopted to. How things shall unfold moving forward re: this adoption is between them and us and of course we already offered them their adoption monies back should BHRR’s Carlsberg have to remain in our Haven Program or if a worse decision needs to be made. AND being the amazing home they are, they insisted it be kept for BHRR’s Carlsbergs’ care – was then used to go towards his neuter/Microchip Bills.

They also have stood solid beside BHRR’s Carlsberg and picked up half of his emergency Vet bill on December 10th.

The goal was to try and get BHRR’s Carlsberg immediately into the hyperbaric chamber being installed at Alta Vista on the 12th, yet there was a delay due to the bad weather and then further delays for the 14th and again on the 18th.

Starting on December 18th, BHRR’s Carlsberg has been going to intensive rehab three days this week and after next weeks closure, he shall be going back three times/weekly until Nancy leaves for her mat leave. We will figure out where he will go after that.

He is doing treadmill work, ball work, having u/s and laser treatments and doing ROM plus flexion exercises and also having massages. We are doing everything for him.

We are doing exercises at home since day 1 and Sean even cut a hole in the ceiling so we can do suspension work. I flip him every 2-4 hours – yes, even at night.

His individual blog will be updated with all of the pics and videos of his progress and while donations to his rehabilitation would be lovely – Sean and I have pulled together from our own pockets/Xmas spending etc. $1,000 to cover the start of this journey – we just would like to ask if people at this time may consider donating their Empties this holiday season!

We have several drop-off spots if you do not wish to cash in your own Empties!

All funds raised from our upcoming end of January annual ‘Breaking Bills Bake’ Online Auction will also go to his mounting Vet Bills. We shall figure out future fundraising as necessary.

AND may we please ask that people wish for Santa to help us spoil him this Holiday Season! 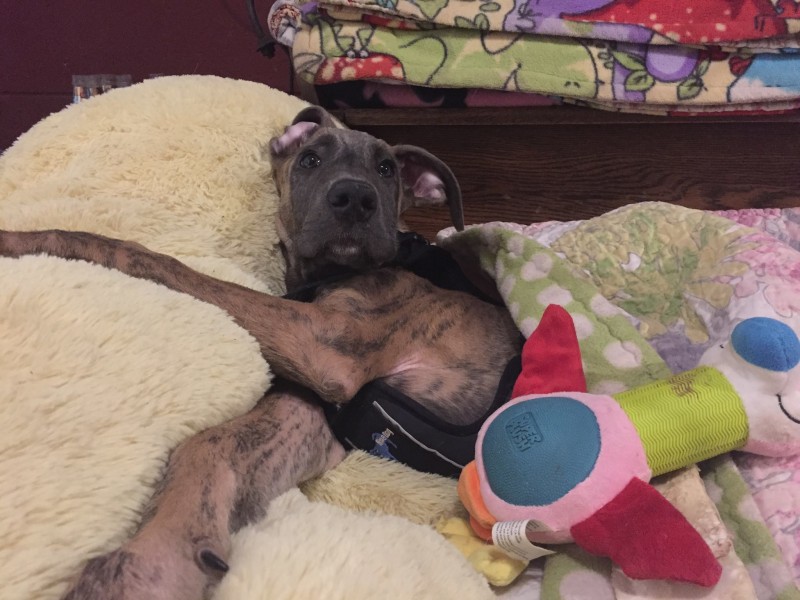 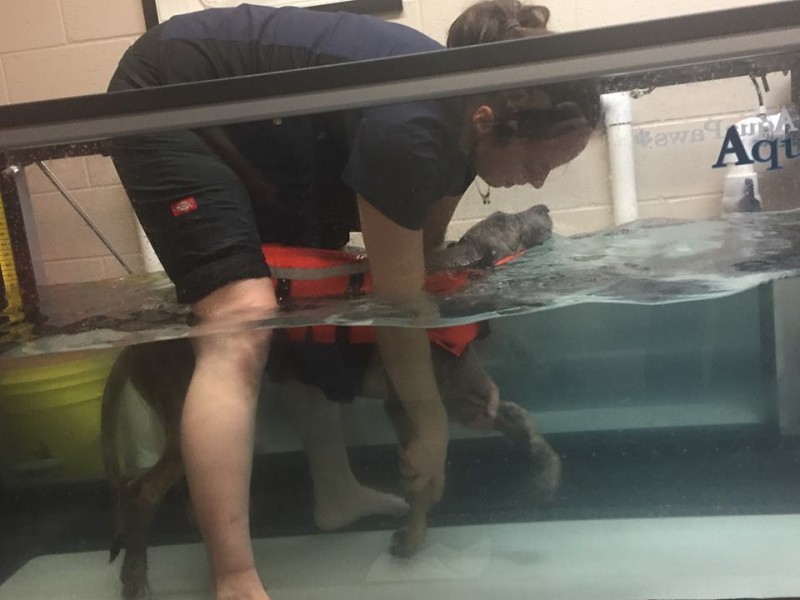