UPDATE: The Bakers Dozen – BHRR’s Murray (Great Dane/Irish Wolfhound)
His wolfie coat is slowly coming in! 🙂
Donated To Date: $570
His Bills Are Already Over $1,400
He was rushed into Kanata Animal Hospital on Thursday November 2nd and then was at Liston Animal Hospital on November 7th.
He was then seen at Kanata Animal Hospital:
November 9th and again on
November 16th and agan on
November 21st and again on
November 28th.
He weighed 13.2kgs (29.04 pounds) at 10 weeks of age at KAH
The day after he originally seen at KAH, Forti Flora was added to his food, as he was having bloody mucousy stool due to the meds dispensed the night before – more info. below.
November 28th, he was re-weighed, examined, temp remains normal, still has slightly swollen lymph nodes and ear cytologies were again done on both ears. He will remain on the Ottomax ear drops twice a day as he still is showing some rods in his results.
He remains on Pred(27.5 mg total daily) and Clavamox.(250 mg total daily)
The latest fecal we did – November 16th was negative as was the first one we did when the litter was 2 weeks of age as we have been following proper Vet protocol in de-worming this litter at 2,4,6 & 8 weeks. They will be de-wormed again at 10 weeks and then monthly after that.
I also did his nails again tonight.
We will be back next week for his next recheck.
I had rushed him into Kanata AH on Thursday November 2nd for when I got home with BHRR’s Everly from her own recheck and repeat x-rays at LAH, we were getting ready to feed and the pups had been moved to their stimulation area – Sean and Kids were home ahead of me and had most things ready – and BHRR’s Murray LOVES his food!
When he did not rush in BHRR’s Murray’s style to get dinner, I knew something was immediately wrong.
I took a look at him and his eyes – left more than right was swollen – and he had hives plus he was quite ‘flat’.
I immediately called KAH as I suspected a possible allergic reaction – to what I had no idea as they have limited exposure to things. We had opened up a new pack of Pee pads that day and they were now getting a different canned food transitioning as of the day before for they stopped liking the PVD Essential Care Canned. Nothing else has changed for The Bakers Dozen.
By the time I got to KAH – his ears and tummy and even penis had lesions and his lips and muzzle were swollen.
Two Vets diagnosed juvenile cellulitis. He had swollen lymph nodes. Per his Vets, onset is very sudden and often mistaken by many as being an allergic reaction.
We also did skin scrapings.
Juvenile cellulitis is also sometimes called puppy strangles or juvenile pyoderma. This is an IDIOPATHIC skin disease occurring in 3-16 week old puppies. No etiologic agent has been identified per the Pediatric Emergencies II research paper found on VIN – Veterinary Information Network – that his one Vet printed out for me.
Further to this paper published by Douglass K. Macintire, DVM, MS, DACVIM, DACVECC, this disease is characterised by facial swelling, lymphadenopathy, deep pyoderma of the head and face, fever, depression etc.
Juvenile cellulitis appears to have an auto-immune mediated cause. Without treatment, the disease can be fatal.
This is NOT contagious.
Treatment involves topical therapy with antibacterial shampoos, antibiotics and prednisolone. This treatment will be continued for many weeks.
BHRR’s Murray has had his recent share of stress for sure with being under the care for his hind end with both Dr. Liston and Dr. Parker(Ortho). ?
This Bakers Dozen has had so many odds stacked against them being born to an emaciated Puppymill Mama…. ??We pretty much have lived at the Vets at least once a week with them fighting so hard for them….
The bills continue to rise for The Bakers Dozen and if anyone may consider a donation you can donate direct to Kanata Animal Hospital 613-836-2848.
OR via email transfer to gwen@birchhaven.org
OR via PayPal to gwen@birchhaven.org
We remain so grateful for any and all consideration….. 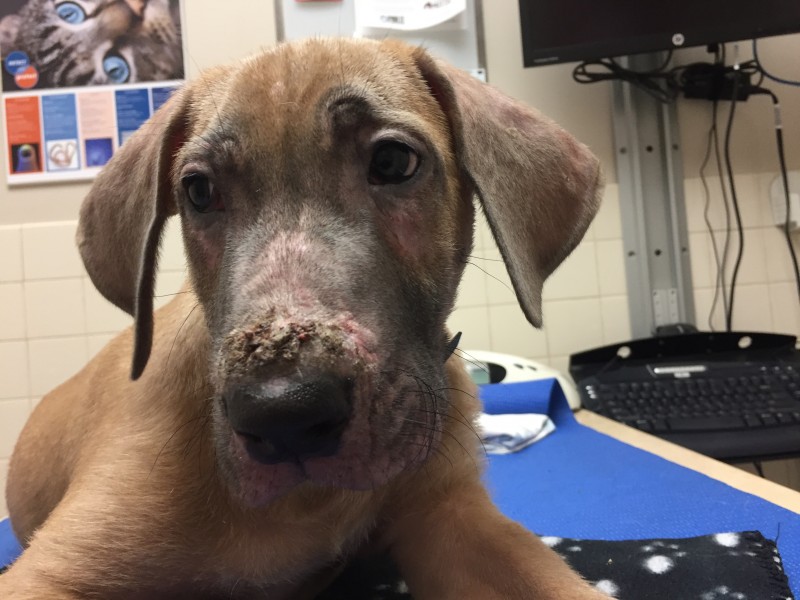