Update: December 22nd, 2010 @ 10:23 AM: I have scheduled BHRR's Potter to go back to LAH(Liston Animal Hospital) today as he has developed(possible seroma) a pocket of fluid around part of his right side(chest) quite suddenly. The worry is that it could be a pocket of internal bleeding that has drained from what we saw in one of his latest X-Ray. Sean and I are going to continue to stay 'real' and calm and the fact that he is eating, drinking and sleeping much better are all positive signs. I also wish to have a recheck just before XMAS and to see if they want to extend him on his antibiotics. He has not co-operated as of yet to allow me to bring in a new UA sample to be tested. 'SHY' bladder syndrome! We are also going to get a current weight on him to see how he is faring. Keep him in your thoughts and donations can still be made to KAH (Kanata Animal Hospital) by calling (613) 836-2848 or by PayPal or by email transfer to gwen@birchhaven.org KAH will take Visa, M/C and AMEX over the phone and will then mail you a receipt.

Sean plus I are all indebted to everyone that has given off themselves in donations, kind words and caring hearts during this very tenuous time.

Picture below is of BHRR's Potter & Sean having a nap together on December 19th, 2010.

Update: December 22nd, 2010 @ 5:33 PM: The Vet confirmed that it is a seroma(phewwwww!) and they drained 11 ccs. She believes that perhaps BHRR's Potter bumped himself or was a wee bit too active and that is why he developed a seroma. She also extended his antibiotics of Amoxicillin another week. His weight was 27.7 KGS(60.94 pounds) so we are still thin. Should the seroma come back, I will bring him back to work with me when I am at KAH on Friday December 24th to have it drained again. It shall be good going into the XMAS holidays on a positive note and hoping that he just keeps getting better! Miracle boy and one that is so very special to SOOOOOOOO many! 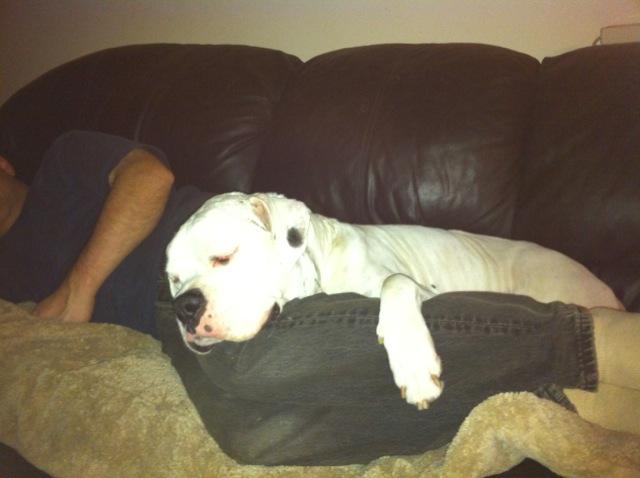