My last post for my night is all about BHRR’s Maple! Gwennie novel time!

BHRR’s Maple was finally after almost 6 months of in-depth rehabilitation ready to go to the Vet last night!

This was the extremely fear aggressive Great Dane that we were asked to assist last August. She was so scared. We had wondered at one point would we be able to even place her up for adoption, she was that fear aggressive. She would have been a cherished BHRR Haven dog if she could not be placed up for adoption.

At that point, I knew for sure that we were getting closer to seeing her go to the Vet to get blood-work, update on vaccines and to get ready to spay her for she was really sexually immature looking. She could not go in any earlier for she could not be safely handled. I did not want any bad experiences for her either. Set-up for success always…..

Now she could have had paediatric spay or was much younger than the shelter thought(they thought ~2-3 years) and I thought no more than a year and had not yet had a heat.

I had said to Sean in August, watch February come and her have a heat…and yup, after we had our latest BHRR “EXPRERIENCE” Mini open house at the end of January, I knew that she was really ready for this next brave step into the world of so much in great experiences plus kindnesses!

Someone asks did she chip a nail for there were a few spots of blood on the floor….looked her over, nope, no nails cracked or chipped.

Then, ten minutes later, some more blood on the flood and take her to the back and the blood has increased to more steady drips….Mason looks at her inner leg and sure enough, she is now in heat…..so, that answers the question for sure if she was a paediatric spay or not.

So, we still ran bloodwork for her future spay(4-6 weeks post heat) and for her Heartworm plus Tickborne diseas panel and she received her Rabies plus DAPP. She had been de-wormed back in August and placed on revolution.

The Vet examined her including heart plus lungs and throughout it all, only one fear growl and it was more of a ‘I do not want to be restrained any longer’ over true fear.

She was SO friendly and socially interactive with all that she met, she showed people how well she could sit and give a paw and give the other paw and her gorgeous ears were admired plus loved on a lot! She loves her treats!

I was so proud of her!!! The journey she has traveled since August, massive! MASSIVE! OMG! Wow!

She is going to make that right matched forever loving home that eventually finds her when she is ready to be placed up for adoption, a fabu addition.

That right matched fit home will also be more than prepared to take on her strong personality and remind her in a balanced positive way to mind her ‘p’s’ and ‘q’s’ for she is a strong willed lovely. She corrects wonderfully yet, you have to be aware of her tendencies to be a ‘gooberhead’.

Hard to believe that this photo is of her in February! No snow, leaves found on the ground! Looks more like fall! 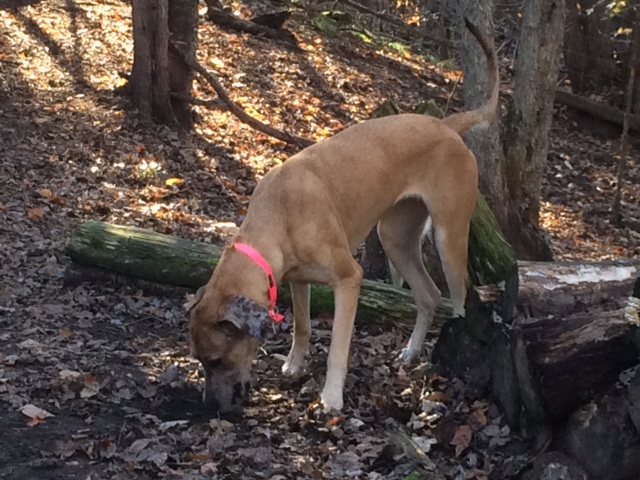