He had a very busy AM on Thursday….He came to work with me and, his ortho specialist saw him for 8:30 AM for a recheck on that right leg, to also exam the left leg that he has begun to limp a bit on and to go over his pathology report(will post a copy in his album here and on his blog).

The surgery on September 1st, has give him marked improvement. YAY! However, the bigger he gets, the more that leg is showing its ‘bowed’ tendency due to the break and his lack of 100% comfort level.

Dr. Phlibert also told me that out of the two meniscus dogs have, the one that ‘never’ tears was the one that Kaos had torn. He said that it was clear trauma that caused his leg to have these serious injuries. Poor wee boy…..

The next plan of action is to keep monitoring and re-evaluate/assess in one months time for he has a LOT of growing still to do. It is too early to tell about his hips and what/if there are any issues stemming from there. We have to let him grow/mature more and keep assessing.

He is not comfortable upon examination on his back right knee/leg, more so over the left side.

He shall remain on Deramaxx(our NSAID of choice, he was having diarrhea on the Metacam when he was on it when he came into rescue) and on Tramadol.

Still no running for him….leash walking, restricted exercise and Dr. Philibert asked if we knew any contacts in alternative medicine. I mentioned one of my favs, Canine Water Wellness and deep support was given to put Kaos in the water to help try and build up some muscle mass/tone in his hind end.

So, as he grows that tibia shall be watched and the left leg also now with the intermittent limping and when he is also old enough, neutered. Many may remember that he is also cryptorchid.

Swelling is minimal on the right knee and warmth also since his first surgery on September 1st. YAY!

I also now have his CWW referral form completed by his one Vet at KAH and lovely ladies, we are looking forward to being back in your expert hands!

After he had his first appointment, Auntie Margaret who had a picnic play date with BHRR’s Ethel on Thursday(moved from Monday) was so sweet and kind to also take him so he did not have to spend the rest of the day hanging in a run at KAH.

He had his rabies vaccine, his next dose of revolution, tons of loving and on his way into KAH yesterday, he had his first bout of car sickness and then a small one on the way home. Many puppies out grow it yet, he has never had this before.

He remains so social, curious, a bit of a busy/nosy body LOL and so affectionate…..anything he is not sure off, you tell him it is ‘ok’ and ‘go see’ and ‘make a friend’ and he is off and exploring!

He is such a happy boy despite all that he has been through and continues to have to go through and today’s BIG thanks is extended to Vegan Cupcakes to the Rescue AND Wendi’s supporters for enough money was raised to pay off the rest of his current bill at LAH and then $100 went to his is almost $500.00 bill remaining at KAH at this time.

We remain totally honoured, privileged and humbled plus forever indebted to every one of his angels, fans and our believers in what we work so hard to do for the animals of BHRR. YOU are such strong links on BHRR’s CHAIN OF SUCCESS! 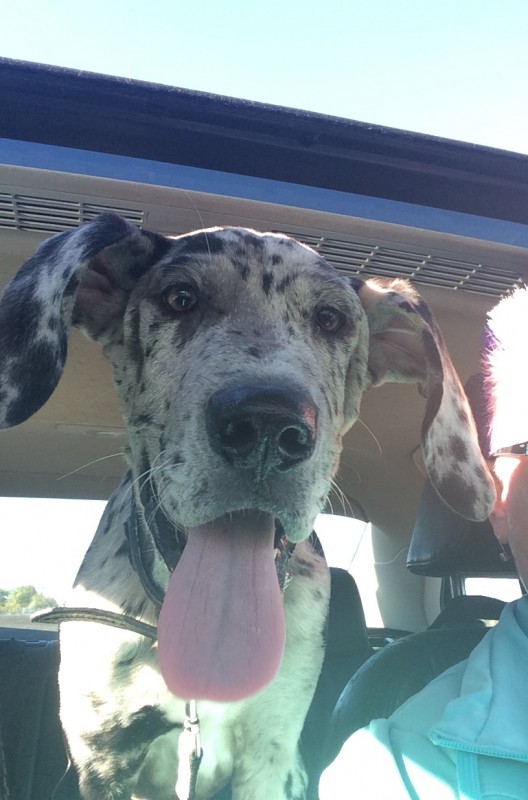