Treatment: Arthoscopy of the stifle and debridement meniscal tears and biopsies joint capsule.

Per Dr. P. – In 25 years he has never had a case like BHRR’s Kaos. He said that to see this kind of severe damage to the meniscus without the cruciate also being affected(as far as he could tell at the time yesterday and is doing biopsies) is not something he has ever seen before.

He also told me that he has never seen the ‘debris’ that he found in the joint capsule and could not determine if it was bone, tissue etc. and he has not found any textbook that also can describe, diagnosis what he found. Hence, why he wanted the biopsies done.

Dr. P. suspects that the pathology report will not say that baby Kaos has a tumour for he feels he is way too young still and suspects that most likely it will come back as infectious. Yet, we have to wait and see.

He is pleased that the measurement of BHRR’s Kaos’ legs continue to be quite even and so the injury to the proximal tibia seems to be doing well. The x-rays from 6 weeks ago were very ’rounded’ and the ones take on the 27th of August were less rounded. His growth plate fracture shall be re-assessed again in a couple more weeks and BHRR’s Kaos shall be re-evaluated again once the pathology results are back in.

Per Dr. Philibert, he did not take out all the tears as he did not want to take out too much and affect the stifle and compromise the meniscus further.

I apologise for the delay again. I was most under the weather myself yesterday and even dropped of BHRR’s Baby Kaos much later than originally I wanted to so that I could rest at home for part of the AM.

Then, Dr. Philibert and I did not connect until this AM to discuss BHRR’s Kaos surgery in depth. I was given a small debrief by the wonderful LAH staff until then.

Dr, P. was honest and said that he does not know if the procedure yesterday is going to be successful for Kaos and we need to monitor and keep assessing as he heals from this surgery and grows.

Benig a giant breed is quite complicated in the growing department, as all of us know.

We cannot THANK his angel network enough for helping us help him!!! We feel so privileged and honoured and blessed. THANK YOU! THANK YOU!

He had an ‘ok’ night. I ended up crashing myself past 3 AM for a bit after the pain medications kicked in. He was not weight bearing for most of last night and today he is toe touching, drank some and ate his breakfast.

The day this boy is completely off his food, we need to worry!

The pain he feels now is nothing compared to the pain that he had to have felt for most of his life. He was so stoic and I said to the staff at LAH, he honestly did not know life without pain if you think about it….6 weeks of age is when all of us become ‘first’ aware of any issue.

How long was it going on before that?

Whatever he needs, Baby Kaos will receive and I have gently hugged him so many times to tell him that his has one mighty fine, truly amazing and fabu strong village surrounding him!!!! 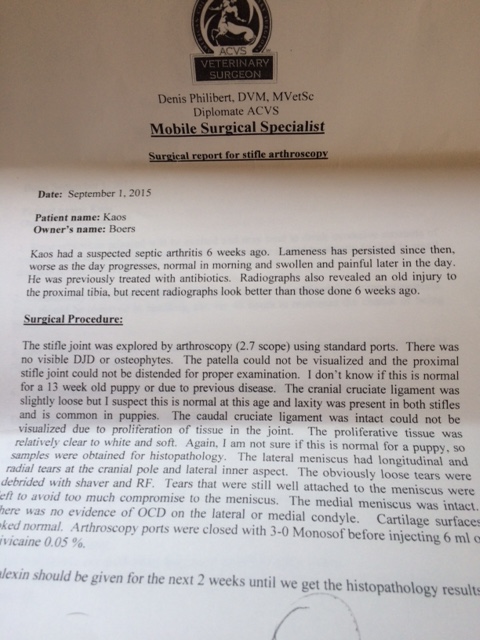