BHRR’s Herbie-licious, The Love Bug
April 2nd, 2015
At the Vet for a recheck, re-weigh and, to check out some sudden appearing of growths/cysts between his toes
He has now put on 17.16 pounds since he first arrived emaciated!!!
He was barely 68 pounds when he first arrived to BHRR.
AND, look! He has some hair!!!
Still quite bald, yet, the hair is coming in and, he is no longer a red raw wound, bleeding even at a soft touch.
We did FNA’s of what was between his toes and, only blood was found and, his Vet would like to do some puncture biopsies to send off.
He wants to lick them and, as we were heading into the holiday weekend, I will draw blood at home and bring it in for processing instead of it waiting in the fridge on Good Friday and, not going out until the Saturday.
We also microchipped him.
The Vet did some research and, sometimes the demodectic mange can be so severe and run deep that, these cyst like growths can pop up.
Yet, to be sure that it is nothing more sinister, we will biopsy and send off to pathology.
I cannot wait for the world to meet this young man…………
He remains on his Ivermectin daily and, we are holding off on another round of antibiotics so that it does not affect the results of his bloodwork.
Isn’t he handsome?! HIs personality is equally amazing!
He shall also never know another day of having to live in -40 C degree temperatures, being neglected and abused.
He will still scream when Mason takes his empty food bowl away when he is in a crate and, will back away. Yet, he is fine with me and Sean and Kinsley in that manner. We still have Mason continuing to feed him and, building up the trust and, that hands can be kind….
He is so loving………..so soft, gentle and kind. 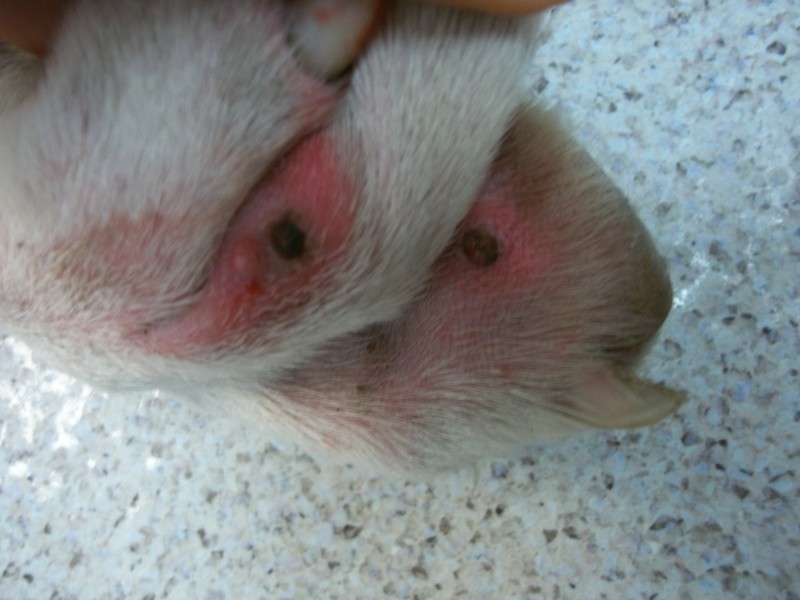