BHRR’s Ava Marie had a bit of a set back on Tuesday. She was feeling a bit fiesty and tried to ‘trot’ from the master bedroom to the main floor area and did not quite make the corner and hit her healing knee on the wall frame. She went down and the sounds she was making just ripped through my heart. I initially thought she had caused herself serious damage.  😥 I was right behind her yet had not been quick enough to get her collar to ‘force’ her to slow down. Idid manage to get her to the triage area – just a few feet away and she did not weight bear on the leg at all. I gave her a Deramaxx 100 mg, monitored her closely and looked the leg over and was one step away from calling one of her Vets as she was still whimpering a bit and I realised that she ‘scared’ herself more than anything else. For sure, it had to have hurt like the dickens yet the whole thing scared her more than it hurt and after much loving and some rest; she was all up for her breakfast(when Ava Marie does not eat, YOU know something is wrong) and had her antibiotics(we have kept her on a longer course and moved her to Clavamox 375 mg) and she was up to going out for a pee. I spent a good part of my AM, watching her and in a heartbeat I would have brought her in if I suspected anything wrong and will continue to monitor yet things seem back to norm. It shall be two weeks on Friday since her surgery and I shall remove her sutures at that time and bring her in next week for a recheck at LAH(Dr. Liston himself is away on vacation until September 7th or so) and I might wait until he is back to get his official ‘sign off’ on her leg. After that, a couple more weeks of rehab work at BHRR and then BHRR’s Ava Marie should be ready to be placed up for adoption AND even saying those words just ‘catches’ at me BUT it is what we do here and I know so many are going to miss her, so whomever adopts her; please stay in touch! 😀 This amazing dream of a Great Dane has touched the hearts of many across the world. I am adding a photo below of her leg from August 23rd and shall also add it to her ‘Ava’s Action Assistance Fundraiser‘ Page. We are still awaiting the collection on ONE item from her ONLINE Auction and when we have that sorted out; we will post the grand total raised between her ONLINE Auction and donations made direct to her account during that time. Ava Marie also decided about three nights ago that she was SO DONE with the triage area for sleeping at night and made her way to the master bedroom, settled herself on one of the dog beds and turned her head to the wall, refusing to look at me in case I was going to ask her to go back to the triage area! LOL No, you do not have too Ava Marie! AND, when I came home from dropping the wee ones at daycamp, who was all snuggled on one of our leather couches with BHRR’s Potter??? NONE other than Ava Marie herself! AND she looked very settled in and was making no move to get off in a hurry! LOL Silly girl! NO LEATHER RULE here at BHRR Missy!  😛 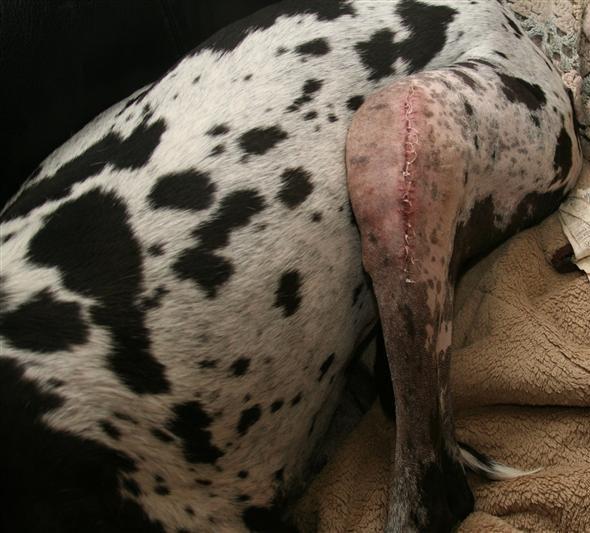 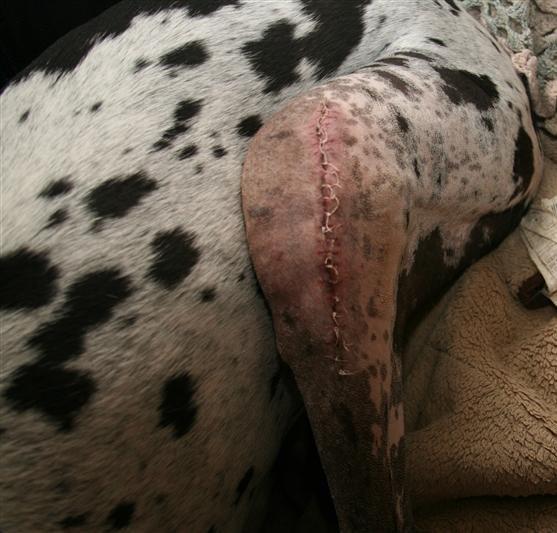