Today, I received the most perfect of gifts ever to receive in this life! As so many know, BHRR’s Potter will kiss almost anyone…..except me…….and it has taken over a year BUT, I guess I finally ‘earned’ what BHRR’s Potter was looking from me and I was bestowed my first kiss from him as I was laying in bed this AM. I had let the dogs out and just left the front door open so they could mill around in the early AM sunshine and went back to bed to lay down a bit. The next thing I knew within minutes of laying down, BHRR’s Potter had jumped up on the bed and he was in one of his spunky playful moods and when he gets like this which is not overly often, you had better watch out for he just pushes his head and body into you and rolls and twists his wiry muscled body around in his joyful abandonment. AND while he has come a very long way with the ‘gentle’ with his mouth during such moments of play, he still can be a bit rough and accidentally pinch your skin. BUT, what he then did was just lift up his head and lean into me and gave me the sweetest of kisses and I just wanted to jump up and down in sheer joy!!!! It took me a whole month after his arrival to BHRR in July of 2009 to earn enough of his trust and respect before he would finally ‘obey’ and sit upon command and it has taken a whole year for him to feel like I was worthy of a kiss. Many people say that *I* belong to him and if Sean or Mason holds him while I have to go to the bathroom at a soccer game, he wants to be with me and the same for any community awareness presentations YET for all that he loves and is bonded to me, something was not ‘quite’ there for him to go to the next level with me and today, it was like experiencing an ‘invisible’ sigh that he is not going to be going anywhere, his finally feeling back up to snuff in health and he trusts that I am not going to hurt, abandon or betray him and that feeling is very special that we finally have reached a point that he can truly relax and feel safe. Having spent the first 11+ months of his life unloved and abused, no matter how much he has come to care for us, somehow; he still was holding a part of himself back from me and maybe he thought that between Sean and myself, I was the one with the power to decide if he lived or not, felt pain or not, ate or not(yet we have had Sean feeding him for the last many months in the main floor area), yet I not only ‘sense’ a change in Potter yet ‘feel’ it and he is just that much more in his element and settled. It is almost an intangible and hard to explain BUT I feel it and he is expressing it and though I only received the one kiss, it was soooooooooooo worth any wait to know that I am meeting up to his standards of how he feels he should be treated, respected and handled. AND believe me, I respect this boy, adore this boy with all of his quirks…..Today was a gooooooooood day indeed! Also, in filing away some pictures; I came across two from XMAS that I would like to post, one of him kissing Mason and one of him kissing Sean and one day, I want my own picture of him kissing me!!! 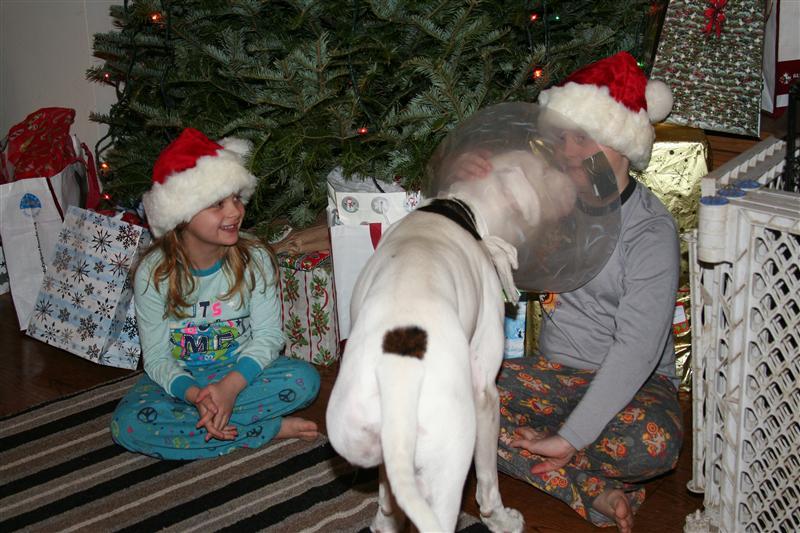 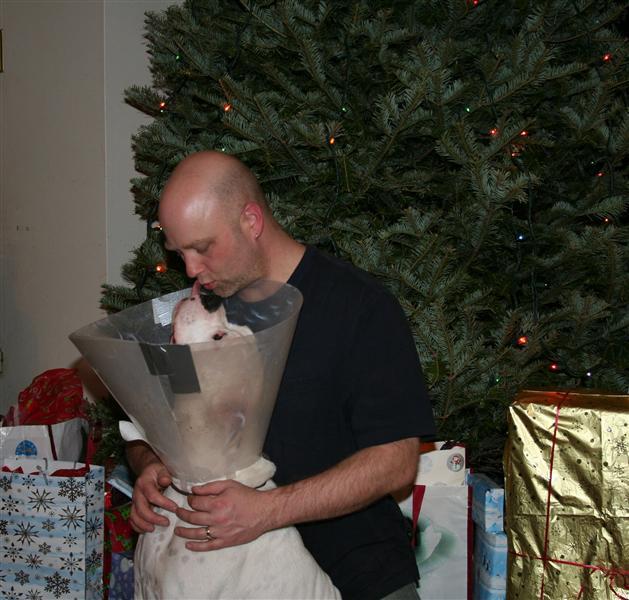 BHRR’s Potter – XMAS 2009 & in the 2nd picture that is his tongue all the way up touching Sean’s nose!